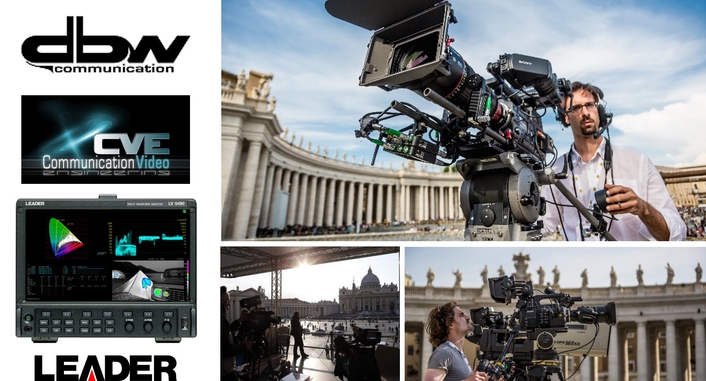 DBW Communication is the latest in a growing number of broadcast production companies using a Leader LV5490 multiscreen waveform monitor to ensure the precision of its 4K UHD output. The purchase was made via Leader's Italian distributor, CVE – Communication Video Engineering.

"We evaluated the LV5490 during a major outside broadcast from St Peter's Square, for the Vatican Television Center," comments Giuliano Berretta, President of DBW Communication. "This was a 19-camera project controlled from a mobile production vehicle with the output uplinked as four 3G HD-SDI signal streams to a Eutelsat satellite. 4K UHD is capable of delivering an extremely high degree of realism if all the creative and technical parameters are kept in check. The LV5490 provides all the signal monitoring resources needed to ensure precise matching between each camera channel. Its built-in CINEZONE feature also allows optimal exposure to be achieved using an intuitive display which is ideal for the fast decisions required during a live production. We were also impressed by the compact size which makes the LV5490 ideal both for use adjacent to a camera or in the mobile control room."

"The LV5490 is the logical choice both for use in broadcast control rooms and on location," adds Cesare Colaiuda, Manager of CVE's Rome office. "It is fully compatible with all signal formats and resolutions currently in common use, from sub-SD up to 4K UHD. DBW Communication invested in the high-frame-rate option which allows signal analysis at x2, x4 and x8 speeds. This feature is ideal for slow-motion content capture. Also purchased was the Leader LV5490SER07 HDR option which enables the LV5490 to measure high-dynamic-range in ITU.BT.2100 Hybrid Log-Gamma, Dolby PQ and Sony SLOG-3 protocols."

The LV5490 offers 4K, UHD, HD and SD test and measurement features in a compact portable unit. Waveform, vector and picture display can all be viewed at the same time on the LV5490's 9 inch LCD monitor. The monitor is full 1920 x 1080 resolution HD with wide viewing angle and high colour reproduction. A 1920 x 1080 HD DVI and HD-SDI rasterized output is also provided to feed a larger monitor. Simultaneous viewing of up to four SDI inputs is possible, including overlays. The size and location of individual channels can be adjusted on the display using a USB mouse so the user is not limited to fixed-size quadrants. The LV5490 can also be controlled remotely using standard KVM tools. Additional features of the LV5490 include video frame capture, instrumentation screen capture, timecode display and ID display.

CVE – Communication Video Engineering
CVE – Communication Video Engineering (www.cve-italy.com) has over 30 years of experience in providing broadcast systems integration services. Based in Milan with a head office in Rome, it is active in every area of broadcast technology including the design and integration of production studios, manual and robotic cameras, audio and video control rooms, apparatus areas, postproduction facilities, playout suites, studio-to-transmitter links, mobile production trucks and DNSG vehicles.

Leader Electronics Corporation
Since its establishment more than 60 years ago, Leader has earned a worldwide reputation for designing and manufacturing some of the most reliable, practical and cost effective electronic instruments available. The products were originally developed for production testing and servicing. These are applications in which ease-of-use and highest reliability are essential. By expanding into a broad line of industrial and video instruments, Leader was able to add to these fundamental qualities a cost-performance ratio unequalled in the industry.