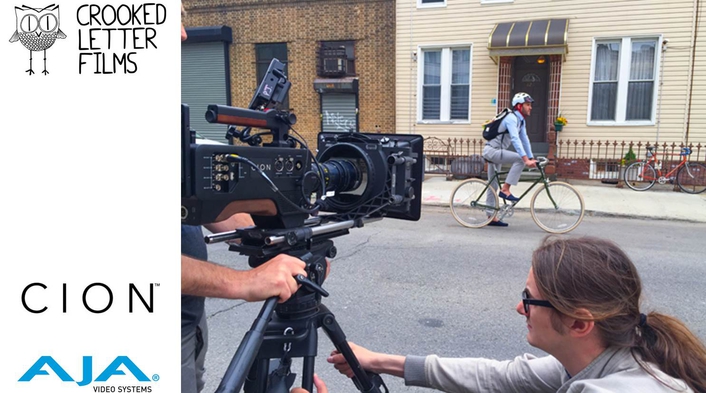 In a world where storytelling reigns, Crooked Letter Films' visual narratives have made lasting impressions for brands like Columbia Records, Refinery 29 and H&M. Based in New York, the one-stop shop conceptualizes, executes and delivers compelling digital stories for a range of clients, guiding each project from beginning to end. When Brooklyn Bicycle Co. recently approached Crooked Letter Films with the opportunity to create a promo for its website, company founder Gabriel Gomez set the bar high, electing to shoot the film in ProRes with an AJA CION production camera.

"We're in a day and age where anyone with a DSLR can call themselves a filmmaker, so we've recently started upping the ante for projects by working in higher resolutions and less-compressed formats, like ProRes," explained Gomez. "For this project in particular, we wanted to create a branded piece that felt more like a short film, and CION definitely helped us give the piece that high-end cinematic feel we were going for."

Paying homage to Brooklyn and highlighting Brooklyn Bicycle Co.'s commitment to the community, the :90 spot follows three local bikers along their daily routes through the city, showcasing iconic landmarks and close-ups of their bikes. Prior to starting production, Gomez and Cinematographer Benjamin Garst compiled an extensive shot list to capture all three subjects in one day. While a majority of the shots required a tripod, several of the action shots called for handheld.

"We shot all over with CION, often out of the back of a van, so having CION's top handle for run and gun helped things move along quicker; it was wonderful," Gomez shared. "I loved how light, small and accessible CION was; we could capture what we needed without being overwhelmed by excess cords, monitors and buttons."

With CION's PL mount, Gomez and Garst branched out into new glass territories, opting to use a combination of Cooke 18-100 T3.1 and Cooke 25-250 T3.7 Cine PL lenses. Having set CION at ISO 320 with extended gamma and flat settings, they captured 700GB of ProRes 444 and ProRes 422 footage, which armed them with a plethora of creative options in post. "The combination of the Extended 1 Gamma mode with flat color correction in ProRes 444 was great for getting a lot of dynamic range; that allowed us to get a lot out of the color in post," said Garst. Garst added, "The simplicity of CION's settings is great, and the menus are divided up intelligently. I'd never used CION before, but the learning curve was quick, and its menu was easy to navigate, even in a variety of shooting environments."

Using CION's AJA Pak media, Crooked Letter Films' team transferred ProRes footage into Adobe Premiere Pro CC for post, where they stylized the look of each shot. "Pak media is great in that you load it up, and there is one clean folder with QuickTime files that you can just drop on your hard drive; it saves a lot of time," expressed Gomez. "We also had many layers of color information from CION to work with, so we were able to easily adjust the highlights and manipulate the footage without screwing up any of the original color information during grading."

The available color information proved particularly important for the closing shot of the Brooklyn Bridge. Gomez concluded, "That last shot is big, wide and closes the piece, so it was crucial we get it right. Given the pretty bleak, overcast shooting conditions that day, we thought it might prove a challenge, but CION provided such an amazing amount of infinite color detail that we were able to turn a gray and blown out shot in reality into a picturesque sunrise shot with purple and orange washes, and even bring back the clouds."

About CION
Ergonomic and lightweight in design with unparalleled connectivity, the CION production camera is capable of shooting at 4K/UltraHD and 2K/HD resolutions. In-camera recording directly to the Apple ProRes family of codecs, including 12-bit ProRes 444, enables incredible image quality capture to cost-effective AJA Pak SSD media at up to 4K/60p, and offers compatibility with a wide range of post production applications. CION can also output AJA Raw at up to 4K 120 fps via 4 x 3G-SDI or up to 4K 30 fps via Thunderbolt(TM).