Content Folks Focus on the Technical Issues of Entertainment 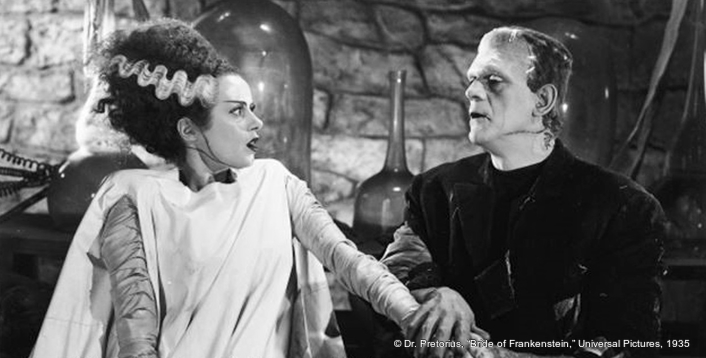 “You are wise in your generation. We must have a long talk, and then I have an important call to make.”

Probably the best way to describe the HPA (Hollywood Professional Association) Tech Retreat is one part creative, one part IT (information technology), one part CFO (chief financial officer) and one part networking. The HPA, which is now a part of SMPTE (Society of Motion Picture and Television Engineers), isn’t confused, it’s just focused on how they can squeeze all of those subjects into four days.

If you hadn’t noticed, the content industry has suddenly become just about everything people do – they create and they consume -- in ridiculous quantities.

Are CFOs the only ones who work anymore?

Citing a recent PayPal study, Pete Putman, of ROAM Consulting, noted that 58 percent of folks out there watch their content on their phone, followed by a tablet. I guess the rest are stuck with a TV set.  While YouTube and Facebook Video fill in the awkward silence periods, Netflix has the U.S. SVOD (subscription video on demand) market where 75 percent of the viewers stream their media.

In other words, couch potatoes still exist but they grab their favorite fast food and consume their content on the go … anytime, anywhere, on any device.

And that’s basically what the Tech Retreat focuses on to meet the changing needs in all of those areas– how to move/protect the content, how to monetize the content and how to get ahead of technology for the next generation(s) of content.

While some folks like to say that VR will be dead on arrival, Lucas Wilson, of SuperSphereVR, as well as the Tech Retreat panels and case studies, showed VR isn't some ugly monster made up of a bunch of spare parts; it is a great new way for people to participate in and experience content. 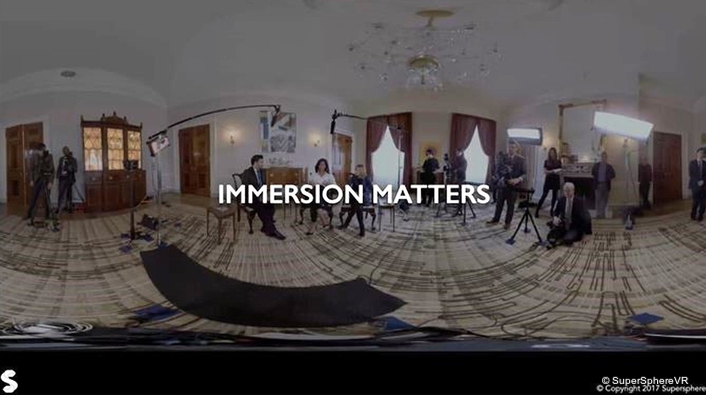 Virtual Discussion – Lucas Wilson, of SuperShpereVR, kicked off the special HPA TR-X day of activities on VR and AR, giving attendees in the packed sessions a clear understanding of the importance of the immersive technology and the personalized impact it can have on the viewer.

“Jaunt, Nokia, Google, Facebook, other camera and hardware/software providers are busy working with filmmakers, production studios and marketing firms to push the technology forward, and get it out to the market quickly,” he noted.

He explained that today, shooters are using 6 to 24 digital cameras shooting at 30-60fps and are producing 10 times the volume of 4K content, compared to older HD video.  Stitching the content together, editing, color correction, adding effects and other work is very time- and computer-intensive. But several companies are also making great strides in cloud-based processing and delivery, quickly shortening times from shoot to delivery.

Wilson added that VR is delivering a rapidly growing volume of short- and long-form entertainment; but it’s also proving to be very effective in company/product marketing and advertising.

“A newer generation of VR filmmakers is thinking about 360Âº from inception. They are not locked into a frame, but rather think of how to capture the entire world around them in an integrated and interactive way,” he explained. “And that is what communicates to an audience. Immersion matters."

While the Tech Retreat attendees were getting ready for immersive content they were more hungry for information/answers about the latest technology developments that allow creators and distributors to attract and capture the eyeballs of the constantly changing viewer.

Industry players like Netflix and Google (YouTube) explained what the next-gen firms are doing; who’s watching them; technology problems they deal with and, perhaps most important, how they monetized the content.

The Retreat was a mashup of producing/delivering great content and mundane technical issues were the key reasons a few of the tech people suggested that 4K and HDR (high dynamic range) technologies should be separated.

Their rationale was that it would simplify and speed transmission for distribution organizations – broadcast, cable and OTT.

During one of the breaks, an attendee noted that directors and filmmakers prefer to work first on the version that has the widest possible audience; but the trick is to optimize the content for every platform. 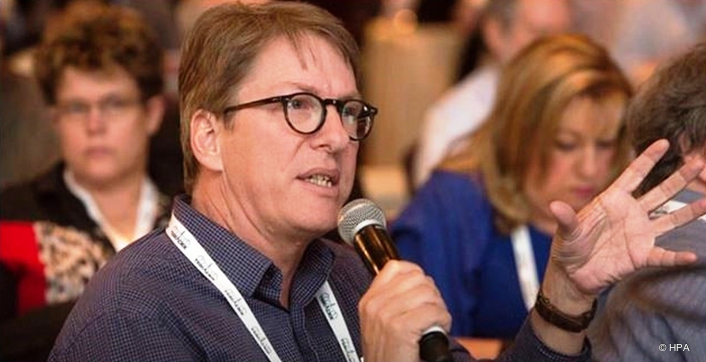 Question from the Floor – Howard Lukk, SMPTE director of standards and engineering, turns a question over to one of the panel members during a session.  All of the sessions at the Retreat made plenty of time available for attendees to get specific questions answered and material clarified.

Because there’s obviously a lot of “secret sauce” involved in the actual work of content workflow; both Robert Puri, of Netflix; and Stephen Wilson, of Avid; were very open with the attendees regarding workflow activities.

Global Entertainment – Proving that images and entertainment are a universal language worldwide, Netflix offers content to viewers in more than 120 countries in markets across Europe, Latin America and Asia.  The streaming content giant continues its quest of delivering localized and global content to viewers everywhere.

Netflix, the big gorilla in the room when it comes to content acquisition and distribution, has become a master at implementing SMPTE’s IMF (interoperable master format) which, simply stated, means the way media assets are handled, moved around and stored.

The thing I like about it is that despite the secrecy that surrounds how they do, what they do and how profitably they do it, IMF isn’t proprietary.  Nope; it’s an open standard any content developer, owner and deliverer can use to offer up content to anyone in the world, on any device.

Like most of the people in the audience (and all filmmakers) Puri emphasized that one of  their biggest challenges is handling legacy assets and workflow.

That’s a tough nut for everyone to solve, especially content owners, because they have hundreds, often thousands, of hours of valuable stuff sitting in the back room that’s worth billions … if only they could economically mine it.

Never Ending – Filmmaking has changed dramatically in recent years; thanks to a growing number of robust, cloud-based services ranging from content to production and distribution.

Still IMF-based, Avid has taken its solution to the cloud as have Adobe and Autodesk with their creative production solutions.

During the sessions, and throughout the event, attendees discussed how the cloud stimulates remote collaboration and has accelerated the use of new automation techniques for pre-production through post.

Filmmakers can quickly and economically have FX, colorist, audio mixing and other specialists simultaneously work on segments of the project remotely to speed the film’s production and delivery.

I admit that the cloud makes a lot of economic sense for collaborative work and distribution; but still, nothing makes a filmmaker feel safer than to go into the next room and see a stack/rack of RAW in process and completed content (and 2-3 independent copies somewhere else).

It’s a much smaller, harder to find cache of valuable stuff compared to being hidden in huge Amazon, Microsoft, IBM, Oracle clouds.

Sure, common sense says you need a copy in the cloud but …

There were so many (reported) data breaches last year that the industry and media only bother tracking the really big ones like banks and Yahoo. 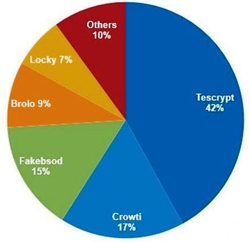 Stick-‘Em Up – Cyberthieves have become increasingly bold and aggressive by releasing malware into organizational networks, encrypting files and offering to provide decryption keys … for a price.  The best pro-active protection is constant staff education and multiple offline backup copies--just in case.

In addition, there is a growing threat of ransomware which Avid’s Rob Gonsalves. director of architecture, said should be a major concern to CFOs filmmaker and content distributors.

Symantec reported there were more than 4,000 ransomware attacks every day last year and that was a 4X increase over 2015.

Typically, they “only” ask for $300 - $10K in Bitcoin.  Of course, even the people who pay the ransom for the decryption key, often end up with storage anchors and a slightly depleted checking account and … no key!

Needless to say, the bosses in attendance looked at their CFOs who looked at the IT folks and probably said, “Not in my house!”

Since the event has Hollywood in its name, there was a theater session focused on the need for more theatrical film releases to keep people coming to theaters. Neil Campbell, of Landmark Cinemas Canada, said his organization had tried VR but it was a novelty for them and Landmark was focusing on delivering a better ticket buyer experience around the films.

With 333 theaters across the country, he noted box office sales had increased slightly and that they were adding amenities such as recliner seating, reserved seating, adult beverages and advanced audio.

The sessions that had notetakers glued to their seats dealt with the rapid changes in anywhere, anytime, anyhow broadcasting and content delivery. And the discussions spilled over into the innovation center (display area) and the roundtable sessions held several times a day during the Tech Retreat. 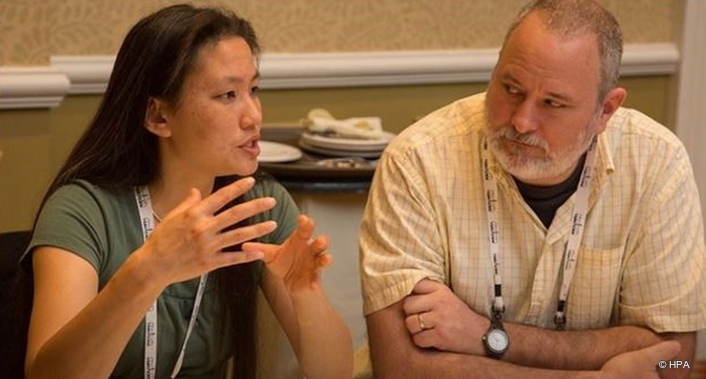 Roundtable Discussions – To encourage in-depth discussions on specific subjects, roundtable activities were carried out every morning.  Above, Disney’s Annie Chang explores one of the areas of particular interest to her team.

With Ericsson, Qualcomm, AT&T, Intel and Verizon recently announcing 5G trials (blazing-fast Internet speed), HPA attendees had a lot of questions on how the technology will enable them to deliver (and monetize) 4K HDR (high dynamic range) content and deliver it to a broader global market.

Even before the HPA Tech Retreat ended, mobile delivery and device folks were touting 5G as though it is a fait accompli. 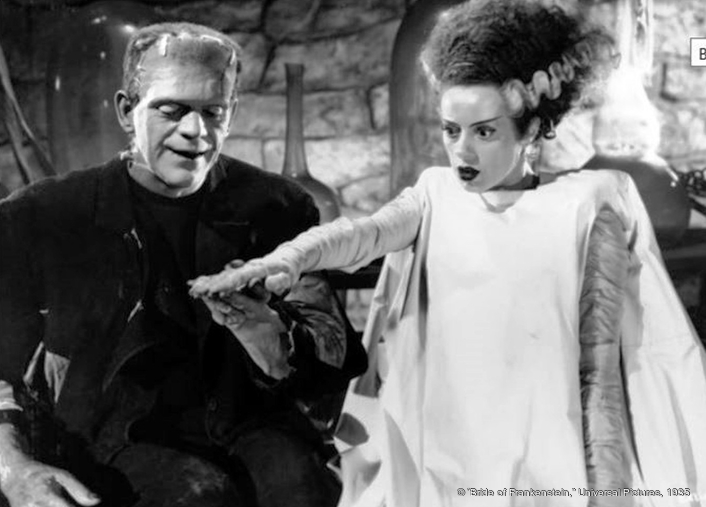 As Mary Shelley said, “It's a perfect night for mystery and horror. The air itself is filled with monsters.”

The only problem is that the distance between a trial and common usage is years in the making, as we’ve seen moving from SD to HD to 4K content.

While broadcast and cable folks are juggling things around for the new ecosystem, SMPTE and the content industry have introduced ATSC (Advanced Television Systems Committee) 3.0.

Basically, it’s the next-generation broadcast standard that will take advantage of newer transmission and video/audio coding techniques so people can enjoy their stuff from more media sources and different delivery platforms including cable, OTT, satellite or even locally stored.

The one thing you can be sure of is that today’s M&E industry is light years past your dad’s movie and TV arena, and it’s only going to become more complex for everyone but the viewer.

The Virtual Buzz at IBC Starts to Look Real
The Virtual Road to Tomorrow’s Films Begins in Earnest
CES Always Has Jewels, Promises, Something for Everyone