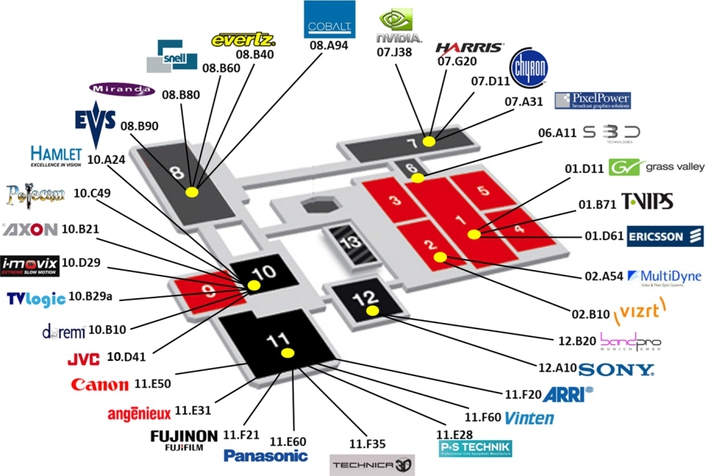 If your Focus at IBC is 3D you should plan to visit these 32 Companies
The future of television came bursting as Spain was working its way to the top of the soccer world last June/July in South Africa. In addition to the HD set of cameras in each of the ten stadiums there was a second set of cameras in five stadiums, actually pairs of cameras, capturing the matches to bring three-dimensional images of 25 of the 64 FIFA games to 3D television sets and 3D cinemas around the globe. Get the latest information on the “3D Work in Progress” first hand from participating companies at IBC in Amsterdam from 10 – 14 September 2010. 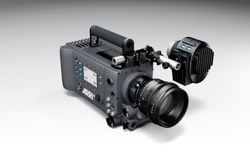 Concurrent with product roll-out is the pioneering use of ALEXA by PACE on the forthcoming 3D motion picture "The Invention of Hugo Cabret", directed by Martin Scorsese, which entered principal photography on the 28th of June with Robert Richardson, ASC as cinematographer. PACE, a key technical partner for ARRI and the first customer worldwide to take delivery of ALEXA, is supplying cameras, lenses, stereoscopic systems and a new generation of 3D rigs designed around the camera.

ALEXA in use for current 3D Films 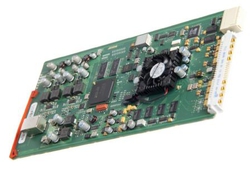 AV conversion, processing and compliance recording specialist, Axon Digital Design, will start IBC 2010 on the crest of a wave having secured a prestigious TV Technology Star Award at NAB earlier this year for its G3D100 3D production and transmission module. Whilst IBC is the European debut for the G3D100 module, such is the commercial appeal of this advanced 3D production tool that Axon will announce a number of strategic customer wins at IBC including Outside Broadcast in Belgium, Eurosport in France and Sky in the UK. Also, the unit has already been used in trial transmissions by UBF in Holland, SFP in France and Sweetwater in the USA. 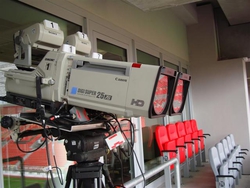 A pair of HDC-1000 cameras with 25x Canon lenses did the job on position one and was the only camera positioned high. Four HDC-1500 pairs were operated at play ground level and were shooting with 11x and 22x Canon lenses. Canon supported the 3D HD production by delivering specially selected lenses. After the successful production and transmission Achim Jendges, Managing Director of TopVision stated: „The future of HD is 3D. We learned a lot and we have now a clear vision of how to get prepared for the next 3D productions. We will definitely go forward in investing and developing all the necessary customized LIVE Sport 3D cameras and broadcast equipment with all our 3D partners. The 3D HD show must go on! It is the best thing I ever have seen since television got colored!

“The Harvey Norman State of Origin Series is one of the biggest tournaments in Australia’s sporting calendar and we’re delighted to pioneer 3D sports broadcasting on free-to-air television and provide our viewers with the best seat in the house,” said Charles Sevior, Network Manager Broadcast Technology, Nine Network Australia. “Bringing 3D to terrestrial television presents obvious challenges in terms of available bandwidth, so we were pleased to be able to draw upon the knowledge and expertise of the Ericsson team to deliver this revolutionary coverage using the latest H.264 MPEG-4 encoding to rugby league fans throughout the country.”

TopVision adds a New Dimension to Live Sports with EVS 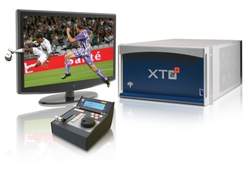 TopVision Telekommunikation, one of Europe’s leading Outside Broadcast service provider, recently made use of EVS’ Instant Tapeless Technology for the live production of the Bundesliga match between Bayer 04 Leverkusen and Hamburger SV in 3D HD. The production, which was broadcast by Sky Germany, was the first of its kind in Germany. For this challenging enterprise, TopVision employed EVS HD XT[2]-LSM systems for the ingestion of feeds and slow motion action replays. The live 3D HD production required 18 cameras (2 x 9 cameras). 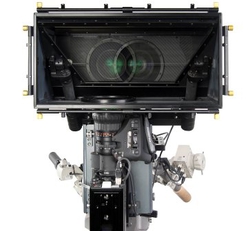 Lenses that are to be used in tandem for 3D productions must share the same focal length – and during shooting, they must also match zoom and focus position. The Fujinon 3D Synchronous Control System includes the ERD-10A-D01 Zoom controller and HJ-303A-06A Synchronizer/Focus controller, plus two SA-206H cables that provide the interface between the 3D controllers and lenses. The system synchronizes the left and right lenses so zoom and focus accurately move in unison. Four new B4 mount lenses are designed for 3D HD productions. All four lenses include Fujinon’s Inner Focus, Zoom Limit, and Quick Zoom features, with an optional 16-bit encoder. 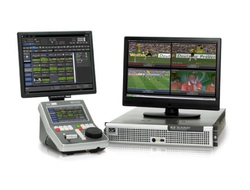 When deployed recently with Telegenic’s T18 stereoscopic 3D truck, the Grass Valley K2 Summit production client was used to feed mixer animation clips, primarily for 3D graphics sequences, into and out of replays using the K2 Dyno replay controller. Sky’s desire to be first to market with stereo 3D broadcasting meant that the Telegenic team had to complete the truck and get it into service in time for the Arsenal vs. Manchester United match on January 31, 2010. The system is packed for easy transport in a flight-cased flyaway system and primarily used for sports coverage for UK-based entertainment and communications provider Sky. 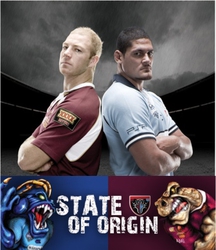 During the trials, Harris® X50™ frame synchronizer/converters are being used to ensure synchronous transport of the 3DTV signals in a side-by-side HD frame-compatible format from the stadium to Nine Network’s 3D master control facility. There, the content is processed through the Harris IconMaster™ master control switcher, where bugs and watermarks are laid down and presented live to air. Demonstration and replay content is also being recorded onto a Harris NEXIO® sever for playout at times when live events are not scheduled. The X50 signal processors will also be used by SBS for side-by-side signal generation before on-passing to their playout facility. 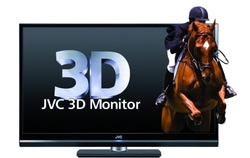 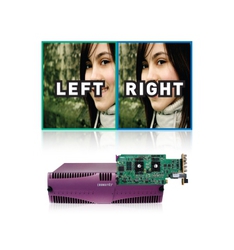 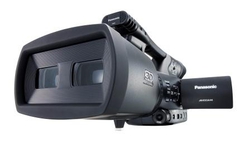 The 3D coverage produced on-site at Roland Garros is broadcasted live via ADSL and fiber to Orange subscribers throughout France, on a dedicated Orange TV channel. Eurosport is receiving the Orange 3D live signal and delivering 3D coverage of the event with the help of GlobeCast via satellite to Panasonic's VT20 3D plasma televisions at about 3000 retail stores in 58 European territories. The signal is uplinked by Eurosport from the stadium to the Astra 1M satellite where it is then downlinked by GlobeCast for delivery to stores via the Eurobird 1. 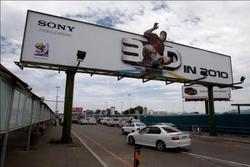 In December 2009, FIFA and Sony announced plans for 3D coverage of 25 FIFA World Cup matches. Integral in the selection and adoption of the technologies were Peter Angell, HBS director of production & programming, who served as FIFA special 3D project leader, and Duncan Humphreys, 3D consultant to HBS for the World Cup and partner in UK-based 3D production company Can Communicate. The aim was to deliver to TV-viewing soccer fans a new experience of their sports and to cheer even more about the World Cup. The tournament should help to kick off what TV makers, networks – and advertisers – hope to become a new dimension in home sports viewing and sports viewing in cinemas.

Darren Long, Sky Sports’ Director of Operations described his reasons for the decision, “We have worked with Vizrt for more than ten years. They have supported us with excellent graphics for our SD sports coverage, then later for HD and now they will do so again for 3D. Vizrt has always been a real-time 3D system and this meant it was easy for our designers to convert Sky Sports’ current HD designs to their stereo 3D equivalents. The results are stunning and the graphics drew special attention from viewers when we recently ran our world’s first stereo 3D football match trial. I am sure that Vizrt’s graphics will enhance our new 3D channel, just as they do for all our other channels.” 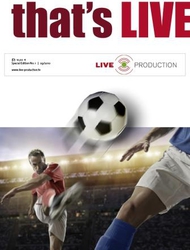 At IBC in Amsterdam and at SPORTEL in Monaco our 3D booklet will be available. The booklet will cover recent 3D productions like football, ice hockey and tennis and will give a comprehensive overview of available 3D production trucks as well as a brief description of state-of-the-art 3D production equipment. Every user of Live-Production.TV who has registered with his postal address until 1 September will get his copy delivered free onto his desk.