.
BBC Research and Development has announced a range of new trials and public demonstrations as part of its Commonwealth Games showcase. These experiments bring together a wide range of industry partners and are helping to shape BBC R&D’s vision for the future of TV, and include a number of broadcasting milestones.

●    The first ever Ultra-HD broadcast of a Commonwealth Games

All trials and demonstrations are open to the public in the Glasgow Science Centre’s Clyde Suite from 10am – 5pm throughout the Games (24 July – 3 August) and will form part of the wider BBC at the Quay festivities.

According to Matthew Postgate, Controller of BBC R&D, the future isn’t being created by one company or different companies working in isolation. “This is a future that is going to be created by collaboration, and the BBC is committed to open innovation and open research,” he declared.

The Showcase centres on BBC R&D’s recently announced plans to broadcast certain elements of the Commonwealth Games in Ultra-HD and an initial version of a new internet-based broadcasting system – two broadcasting firsts.

BBC R&D is announcing the first public demonstrations of projects taking advantage of this new system – demonstrating its potential for richer, more interactive and more personal ways of telling stories to audiences – as well as the first live 4G mobile broadcast in the UK.

Ultra-HD:
Visitors to the Showcase will be able to see a special BBC R&D production of the Commonwealth Games in Ultra-HD, explore some of the technical challenges facing Ultra-HD production, such as using higher frame rates and higher dynamic range, and see how it’s put together in the BBC’s experimental IP Production Gallery. Visitors can also experience what the future of TV viewing in the home may be like, with a joint demonstration from BBC R&D and Cisco. The demo explores how Ultra-HD footage from the Games could be experienced with adaptable displays and contextual applications that provide a truly immersive and enhanced viewing experience.

Venue Explorer:
Gives users the freedom to explore multiple live events taking place in one venue at the same time. It also demonstrates how all audiences could benefit from an Ultra-HD production using standard definition devices. For the Showcase, a fixed wide-angle Ultra-HD camera will provide a live feed of all the track and field action taking place in Hampden Park. This allows users to use a standard tablet to pan around and zoom into the events they’re interested in. The audio will automatically adjust to match the view and, as it’s powered by an Ultra-HD feed, the resolution never drops below standard HD. Interactive graphics overlaid on the video will provide additional information relevant to the scene. 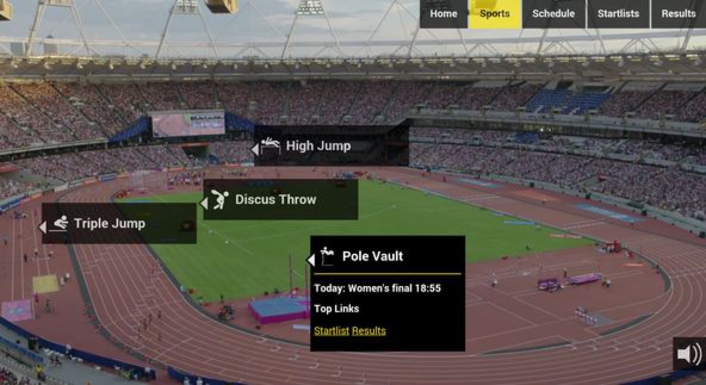 4G mobile broadcasting:
In a UK first announced, BBC R&D will collaborate with EE, Huawei and Qualcomm on a trial to broadcast live footage from the Games over the EE 4G mobile network. Handheld devices are an increasingly popular way of consuming BBC programmes but conventional streaming over mobile networks can buffer or freeze at times of heavy congestion, as content needs to be sent individually to every user. 4G broadcasting offers an alternative to this, allowing live streams to be transmitted once over the mobile network to a large number of users simultaneously. Not only does this offer potential audience benefits due to the increased quality and reliability, it can also be a more efficient way to deliver popular shows and live events to audiences. Those visiting the Showcase will be able to see 4G broadcast for themselves with live action from the Games delivered to demo handsets using a special Commonwealth Games application.

Virtual reality:
By combining existing research into 360 degree video and 3D audio, BBC R&D, with the assistance of UCL, will create the most immersive live virtual reality broadcast to date. In this demonstration, a panoramic, 360 degree video camera, and a 3D audio microphone will be placed into the SSE Hydro Stadium in Glasgow, streaming the live feeds to an Oculus Rift virtual reality headset in the Glasgow Science Centre. This provides the viewer with the sensation of being transported inside the stadium and being part of the crowd. This work forms part of ongoing projects to explore the creative and editorial potential of new consumer audio-visual technology.

Augmented video:
An experimental extension to BBC iPlayer that can draw graphical overlays on top of video streams. As with subtitles, these graphics can be activated or deactivated by the viewer. In sport these could a include putting names above player’s heads, adding text to show how fast a person is running or highlighting a ball to assist viewers with poor eyesight. Other examples could include adding zoological information about a species being shown in a nature documentary, or showing recipes during a cookery programme. At the Showcase, visitors will be able to see the prototype in action, where the graphics will be used to provide insights into gymnastics events.

White Spaces:
TV White Spaces are gaps between the channels currently used by Freeview transmitters. With careful planning other services can be fitted into these gaps. BBC R&D is very interested in how the new spectrum provided by White Spaces might be used – delivering broadband to rural areas, providing more room to expand Wi-Fi in your home and many other applications. At the display in Glasgow, visitors will be able to come and find out where the White Spaces are and view the demonstration that uses TV White Space to provide live and on-demand IP streaming of multimedia content to user devices in a home environment.