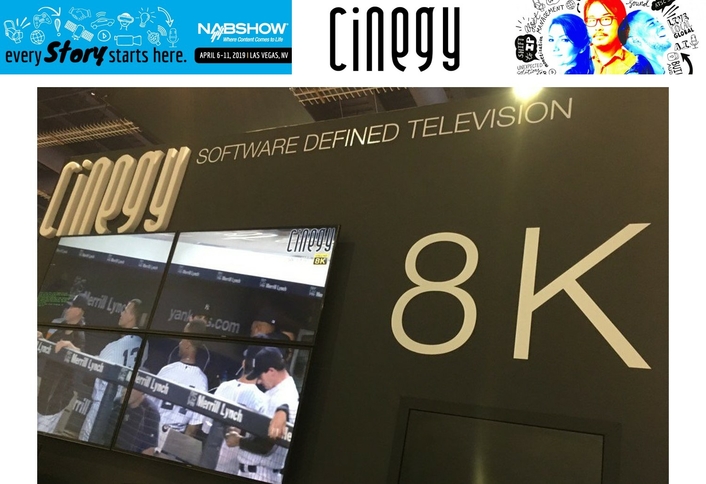 NAB2019, 6-11 April, Booth SL8716:  Cinegy, the global leader for broadcast playout software in the cloud, has announced that its whole entire product line-up is now 8K capable – including a number of new, 8K-ready products that take Cinegy into enterprise, IT and professional AV markets.

Cinegy Head of Product Management Lewis Kirkaldie said, “As important as it is to be able to scale media solutions and do it as efficiently as possible, the ability to do this in a cloud-optimized fashion is just as important.

“Cinegy has optimized its entire product line-up to make it easily cloud deployable. As a front-runner in IP and cloud playout, we have already learned many lessons. The integration of Cinegy Air PRO with infrastructure-as-code software Terraform; visualization and analysis tools such as Grafana and Elasticsearch; plus our own deployment tools and agents make the difference between having an app in the cloud or being able to launch and manage the creation of an entire global playout center from scratch.”

In the case of the new Cinegy Multiviewer release, in addition to being 8K capable, its existing GPU optimization is even better. This makes it the ideal companion to Cinegy Air PRO and Cinegy Capture PRO, already in use by broadcasters, cable operators, telcos and production companies around the globe.

Cinegy CTO Jan Weigner added, “The customer list of Cinegy Multiviewer is a who’s who of the global media and telco industries, but interestingly lots of sports customers have begun deploying it as well. We seem to have the only solution that ticks all their boxes, and then some.”

The benefits of increased scalability and efficiency mentioned for the new Cinegy Air PRO release are equally helpful for Cinegy Capture PRO, making it not only capable of capturing 8K in 10-bit at up to 60 fps, but this equally translates into being able to capture four channels of UHD / 4K using the same hardware.

Whether it’s capture, playout, monitoring, news, editing or MAM, all Cinegy products can handle mixed SD, HD, 4K/UHD, and 8K formats, as well as address the challenges of HDR. All Cinegy products are ready to ship at NAB2019.