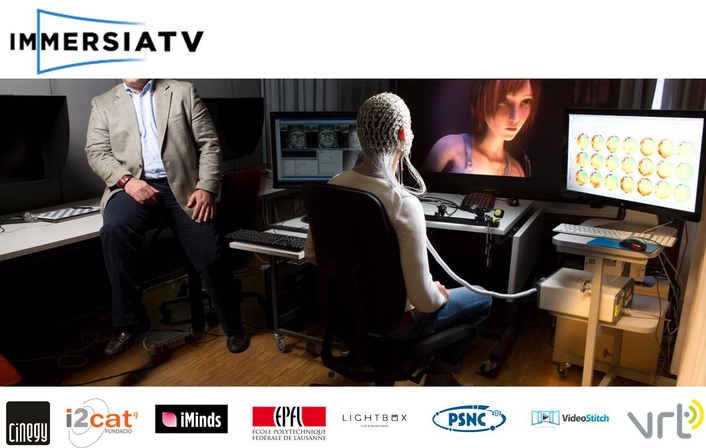 Cinegy, which develops and produces software technology for digital video processing, asset management, video compression, automation and playout today announced that it has been invited to join ‘ImmersiaTV’, an EU consortium of university technology incubators, research institutes, and commercial entities collaborating to research and develop the future of home entertainment, including virtual and augmented reality.

The narrative possibilities of visual media have developed dramatically over the last 120 years, from the first flickering silent monochrome films to UHD video with multi-channel audio. It is only in the last 20 years that the possibility of immersive video has emerged, and only in the last few years has the technology for displaying immersive video emerged at viable consumer price points. However, the industry is still only beginning to explore paths to suitable technologies, devices, and content delivery.

Cinegy Managing Director Daniella Weigner said, “Although numerous companies and researchers have developed software and hardware to create immersive experiences based on video game technology or multi-camera 360 degree video, they have largely resulted in short-lived ‘wow!’ experiences, much as innovations in early cinema thrilled audiences by placing them in the path of a moving train. However, the effect soon wore off.

“The questions ImmersiaTV intends to answer are how, exactly, can immersive technologies contribute something substantive and enduring to entertainment? How can the technology be used to tell a story or help drive a narrative? And will consumers ultimately accept and embrace the new experiences being offered?”

Cinegy’s specific role is to provide the production tools and depth of experience needed to handle disparate video streams, whether omni- or unidirectional, within the production chain, as well as provide support for integration, testing, and evaluation of ImmesiaTV’s eventual end-to-end production and delivery infrastructure.

Weigner added, “Cinegy innovations were crucial enablers at the dawn of HDTV, and have currently placed us at the forefront of the migration to UHD. We will now play a major part in defining what many believe to be the new frontier of broadcasting, so watch this space – or should I say, immerse yourself in the experience.”

This project has received funding from the Horizon 2020 ICT 15 research and innovation programme under grant agreement No 668619.

Between January 2016 and June 2018, ImmersiaTV will create a novel form of broadcast omnidirectional video content production and delivery that offers end-users a coherent audiovisual experience across head mounted displays, second screens and the traditional TV set, instead of having their attention divided across them. This novel kind of content will seamlessly integrate with and further augment traditional TV and second display consumer habits. ImmersiaTV will assemble an end-to-end toolset covering the entire audiovisual value chain: immersive production tools, support for omnidirectional cameras, including ultra-high definition and high dynamic range images, and adaptive content coding and delivery, and demonstrate it through 3 pilot demonstrations addressing both on-demand and live content delivery.

The project
ImmersiaTV aims to create new formats of television, bringing revolutionary ways to watch TV at home. Broadcasters and content creators have access to the tools and all the necessary knowledge to create this new cinematographic language.

Pilots
ImmersiaTV will conduct 3 pilots to demonstrate the technologies and procedures developed in the project. The pilot topics are:
1) a football school documentary
2) a Live sports event
3) improved version of pilot 1 and 2

Why ImmersiaTV?
The majority of European TV consumers now watch TV programs in a multi-display environment. Second screens -mostly smartphones, tablets or laptops- are generally used to check information not directly related to the events in the TV content being watched. As a result, the attention of the audience is generally divided between these different streams of information. Broadcasters have tried to orchestrate all these different rendering platforms to complement each other consistently. However, their success is limited, and this limited success is due, at least in part, to the very different formats in which information is delivered (web-based texts, mobile apps, traditional broadcast television… )

In this context, the arrival of immersive head-mounted displays to the consumer market introduces new possibilities, but also poses new challenges. Immersive displays impose radically different audience requirements compared to traditional broadcast TV and social media. They require a constant, frequently refreshed, omnidirectional audiovisual stream that integrates sensorimotor information. This means that, at minimum, the visual perspective rendered changes consistently with changes in head position and rotation. In addition, immersive displays challenge the conventions of traditional audiovisual language. For example, cuts between shots, which constitute the very basic fabric of traditional cinematic language, do not work well in immersive displays. From a user perspective, omnidirectional TV offers a new user experience and a different way of engaging with the audiovisual content.

This project will create new forms of digital storytelling and broadcast production that, by putting omnidirectional video at the center of the creation, production and distribution of broadcast content, delivers an all-encompassing experience that integrates the specificities of immersive displays, and the feeling of “being there”, within the contemporary living room. We propose a new form of broadcast omnidirectional video that offers end-users a coherent audiovisual experience across head mounted displays, second screens and the traditional TV set, instead of having their attention divided across them. This new experience will seamlessly integrate with and further augment traditional TV and second screen consumer habits. In other terms: the audience will still be able to watch TV sitting on their couch, or tweet comments about it. However, by putting omnidirectional content at the center of the creation, production and distribution processes, the audience will also be able to use immersive displays to feel like being inside the audiovisual stream.