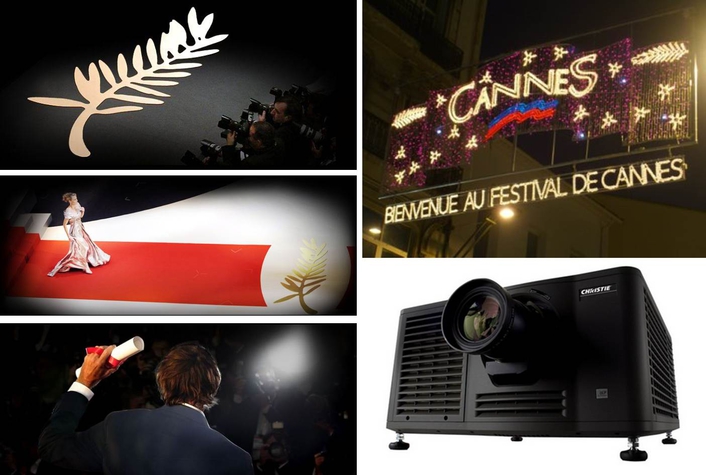 Christie's Solaria Series: Stars of the Festival against a backdrop of record growth for digital cinema in France
Christie®, a global leader in digital projection solutions, is the sole provider for all digital projection services at this year's Cannes International Film Festival, including the Official Selection and the Marché du Film. The company is an official Technical Partner of the Festival, which runs from 11th – 22nd May, 2011, for the fifth consecutive year.

As a Technical Partner, Christie will provide its DLP Digital Cinema® projectors for the screening of major digital titles throughout the entire Festival. Of the 23 screening rooms that will use digital projection equipment at this year's Festival, 13 will be equipped with Christie SolariaTM Series projectors. Compliant with all DCI (Digital Cinema Initiatives) specifications, the Christie Solaria range is scalable and ideally suited to 4K digital cinema. Moreover, the Christie Solaria's Brilliant 3D™ technology also provides the brightest 3D projection available, with an output of 32,000 ANSI lumens. Since its introduction one year ago, the Christie Solaria Series has been central to the massive growth of digital cinema around the world and in France, where the projectors have garnered wide acclaim for Christie, specifically from independent operators.

Installed base of digital equipment more than doubles in one year

There can be no doubt about the French cinema market’s conversion to the digital format. With 2357 digital screens in France today (*Source: CinéGo.net) against just 1000 the previous year - an increase of 135% - and with the majority of these furnished by Christie, the firm has asserted its leadership position, playing a major role in the inevitable move to digital cinema.

Squarely in the centre of 3D technologies, Christie is also, now more than ever, leading the great success of 3D digital cinema, which continues to spread throughout France. Today, by way of example, there are 1703* active 3D screens in French cinemas, versus just 750 at the end of April 2010.

"With each new year, we are honoured to provide all digital projection services for the Cannes Film Festival. The trust that the Festival's organisers have placed in us is evidence of the reliability and performance of our digital cinema projectors," commented Richard Nye, Christie's Cinema Sales Director, EMEA.

Christie manufactures today's most widely used digital cinema projectors and continues to consolidate its leading position in the global market for active digital cinema projector installations. Thanks to the wide acclaim for its projectors at the largest international event in the film industry, Christie continues to dominate as the brand with the most advanced technology in digital 2D and 3D projection.