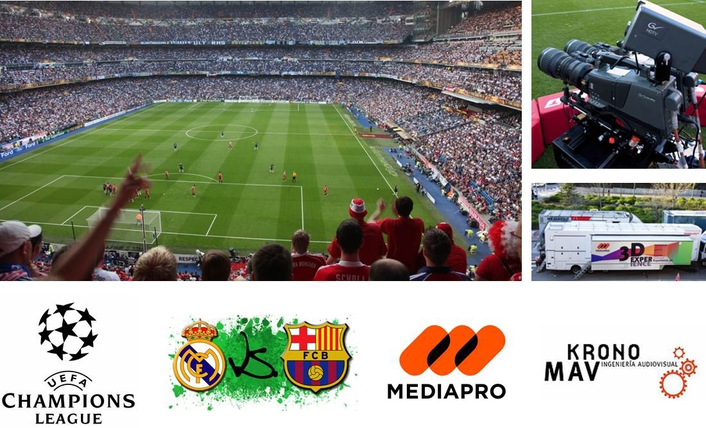 A 40-man team will provide services for TEAM, the UEFA Champions League rights holder. TV3 will carry out production with all the technical services provided by the MEDIAPRO group, including its 3D outside broadcast unit. The 3D signal has been requested by Dogan TV (Turkey), Al Jazeera and Denmark TV (Denmark).

MEDIAPRO will set up six 3D camera positions in the Santiago Bernabéu Stadium. The technology developed by MEDIAPRO and Kronomav will broadcast the match which includes calibration, analysis and automatic correction systems of stereoscopic 3D video images in real time. The entire match will be produced in 3D and no automatic 2D to 3D conversion will be used. A 3D ready outside broadcast van will be in place at the stadium to broadcast the signal as well as providing 3D graphics in real time. TV3 will broadcast the game live in 2D as usual and later it is slated to show the game in 3D with Dolby 5.1 sound in the time-slot set aside for stereoscopic broadcasts.

MEDIAPRO has extensive international experience in the production of sporting events using 3D technology, including Spanish Division games. TV3, also broadcasts in 3D on its test channel featuring events such as plays, documentaries and sporting events.

MEDIAPRO and TV3 have previously worked together on 3D productions such as the 5-hour broadcast of the human-castle building competition from Tarragona last October as well as the recent recording of the musical “Geronimo Stilton”, and as well having future projects of big live events in the pipeline.