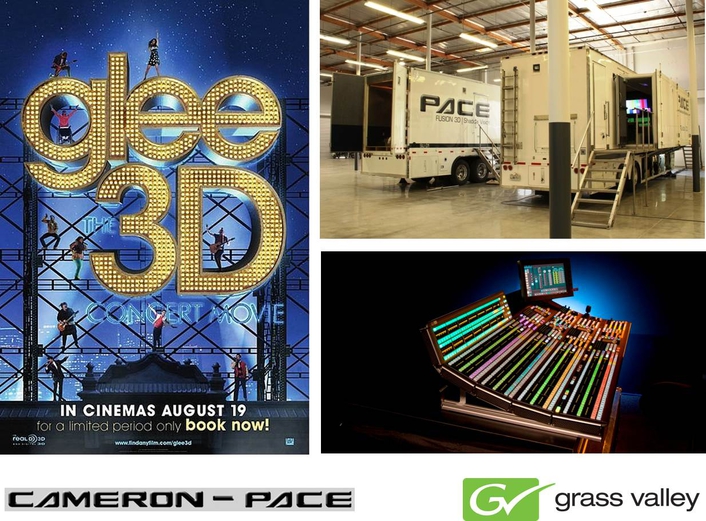 “We strive for the highest 3D quality in every production in order to tell the story in the best way possible, and the Grass Valley Kayenne gave us that for 'Glee',” said Vince Pace, Co-Chairman and CEO of CAMERON | PACE Group.

“Using the Grass Valley Kayenne during the recording of “GLEE: THE 3D CONCERT MOVIE” was simple and easy,” said Bruno Brunelle, 3D Engineer of CAMERON | PACE Group. “Kayenne gave us the tools needed to record the energy and flow of the live performance and bring to the ‘Gleeks’ (‘Glee fans’) the rich 3D experience they have come to expect from CAMERON | PACE Group.”

“The faith that CAMERON | PACE Group placed in Grass Valley technologies only reinforces our belief that specialty 3D-only equipment is not necessary for high-end 3D television and theatrical productions,” said Jeff Rosica, Executive Vice President of Grass Valley. “Production companies the world over have been and are continuing to produce 3D content with multiformat Grass Valley equipment, and we're proud to support them in their role.”

CAMERON | PACE Group (CPG) is a trend-creating technology and production services firm. CPG is advancing the future of 3D across all media channels by making the most advanced products, support solutions and creative tools available and accessible to networks, studios, broadcasters, filmmakers and creative teams around the globe. The company is singularly dedicated to building upon the strong foundation of innovative technology developed by its visionary co-founders, James Cameron, Vince Pace and Patrick Campbell and leveraging its unmatched 3D expertise to help content producers realize 3D's full potential as a creative and powerful storytelling medium. CAMERON | PACE Group was founded in 2011 by Vince Pace and James Cameron and is headquartered in Burbank, CA.