“We made the decision that we are not going to go into the 2D-mobile-unit business with these trucks,” says CPG Co-Chairman/CEO Vince Pace. “But we are going to continue to innovate products and support the industry with different types of technology.”

The sale covers four trucks: the 53-ft. double-expando and 48-ft. single-expando ShadowCaster units and a pair of 48-ft. straight trucks that will serve as B units at Dome.

“The first thing for us in looking at this [agreement] was capacity, because we are growing,” says Mary-Ellen Carlyle, SVP/GM, Dome Productions.  “When I went down and saw the [48-ft. expando] ShadowCaster truck, I knew right away that it could be a great hockey truck for us. Of course, we are doing work to it, but we knew that ShadowCaster could fill a role for us in Canada immediately.”

Dome Sees Growth South of the Border
Although Dome plans to roll out the revamped 48-ft. expando this month, it is still evaluating its options for the 53-ft. double-expando, the first ever in the Dome fleet.

“In terms of the double-expando unit, we are not quite sure what we are going to do with that yet,” says Carlyle. “It’s the first time we’ve ever had a double-expando, so we are evaluating the best place for it.” 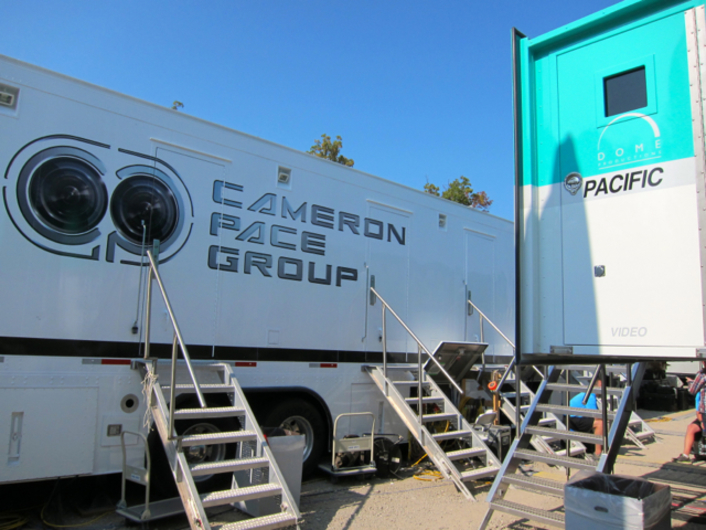 Dome (Pacific truck on right) teamed with Cameron Pace in 2012 to produce a 3D feed of the Ryder Cup for BSkyB.

Regardless of where the double-expando ends up, the Canadian company (co-owned by Bell Media and Rogers Broadcasting) expects to continue down a path of rapid growth in the coming years — especially in the U.S. Having launched two HD trucks in 2012 and another two this year, plus the former CPG units, Dome is set to hit the 14-truck mark in 2014.

“There is definitely an intent to grow our business,” says Carlyle. “We do have our internal business through SportsNet [also owned by Rogers Broadcasting] and TSN [also co-owned by Bell Media], but we are growing well beyond that. And I am confident that a lot of that growth is coming in the States.”

Pace Looks Back at 3D Sports Boom
The deal puts an exclamation point on what has been a tough year for live 3D sports production following ESPN’s and the BBC’s decisions to close down their respective 3D services because of lack of viewership. Although Sky Sports has emphasized that it remains committed to 3D sports, FIFA is reportedly reconsidering whether it will produce a 3D feed of next summer’s World Cup in Brazil.

“Once ESPN started to feel that the technology needed a better path to the consumer,” says Pace, “we started to realize that we had an excess of inventory in that market for its current 3D needs.”

Throughout the past three years, CPG has spearheaded the evolution of live 3D sports production in the U.S. through its relationship with ESPN and other rightsholders. Beginning with the MLB Home Run Derby in July 2010, ESPN and CPG (along with Sony and NEP) produced hundreds of events in 3D, including The Masters golf tournament, NBA basketball, college football and basketball, Summer and Winter X Games, and the Little League World Series. Chief among CPG’s many mobile-production innovations was the 5D model co-developed with ESPN, in which the 2D and 3D shows shared the same mobile units, crew, and a mix of 2D cameras and 3D rigs. A full 3D telecast (left- and right-eye feeds) was produced, and the 2D telecast was derived from the left-eye feed.

“I think we have done a great job of creating the infrastructure for 3D and 5D production, but there were still hurdles in the display devices, especially the glasses issue, that [prevented] the real successful penetration in the market,” says Pace. “The whole company is proud from the first All-Star Game to all the ESPN 3D [shows] and the X Games to the Ryder Cup.”

He acknowledges that entering the truck market proved a tricky proposition but says it was necessary to move live 3D production forward.

“The mobile-unit [business] was kind of an interesting model. I just never knew where we stood in that sector,” he says. “We didn’t want to compete, but we had to compete if we were going to figure the problems out, because no one else was going to invest in this ‘crazy idea.’ We felt we [needed to] overdesign and overspend because we needed the industry to catch up a bit. But we are very proud of the end result in accomplishing … the integration between the 2D and 3D mediums [and] bringing a lot of attention to the medium.”

CPG Looking Forward: More Than Just 3D for Sports
Despite the truck sale, Pace says CPG remains committed to the sports and broadcast sectors, with plans to work with Dome on future production — 3D and otherwise. The two companies previously partnered to help produce BSkyB’s Ryder Cup 3D coverage last year and will look to work together on future events.

“Dome is a great partner for us because they have pledged to let us knock on the door and try new things with them in terms of innovation. That is a main reason why we made this deal,” says Pace. “The real strength of what we have brought to the table is a workflow, an infrastructure, a culture of production that handles multiple cameras. That culture was something that Dome respected and wanted to collaborate more on as we start to look at other sports applications for this technology that might be multicamera as opposed to just simply 3D-targeted.”

While plenty busy preparing to create three Avatar sequels over the next five years, CPG remains focused on the 3D-data-mining initiative it launched at NAB2013 with Dolby and Phillips and believes that the rise of 4K and 8K television sets could be the key to finally creating a quality glasses-free autostereoscopic experience for the consumer.

“Both [Co-Chairman] Jim [Cameron] and I are extremely confident that it will all come full circle,” says Pace. “When you talk about 4K and 8K displays, you really see the potential of autostereoscopic that feeds both left and right eye in a very natural fashion. That is our journey, and there are certain steps we have to take to let all the different technologies raise themselves to the bar, because they can’t be pushed, and this company can’t push them independently.”