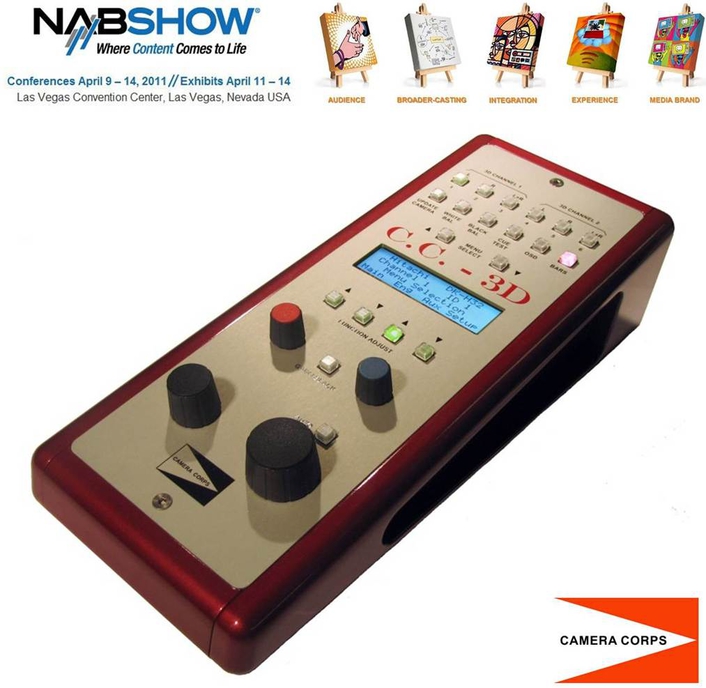 "The broadcast industry is experiencing a surge in demand for efficient stereoscopic production equipment to meet the needs of new 3D television channels," comments Camera Corps Technical Director Jim Daniels. "The CC-3D Universal RCP is equally suitable for use with 3D and 2D systems. Up to two stereoscopic rigs can be controlled on a paired-camera basis to maintain predetermined adjustment offsets between left and right cameras, or as individual cameras if preferred. The panel is intuitive to operate, allowing fast and easy operation during outside broadcasts as well as for live stage or studio events."

On the top row of the CC-3D Universal RCP are six channel-selection pushbuttons, assignable to each camera. Fixed-operation buttons are positioned on the next row, each with a specific function and always active regardless of which menu is selected. Below this are two selector buttons which are used to step through the various menu screens. Four function-adjustment buttons below the menu screen perform actions on currently displayed parameters. A full set of engineering presets is accessible and, once set, can be password-protected to prevent unauthorised changes. Cue/tally information for all six channels can be accommodated, the colour of the channel select buttons changing from green to red when a cue/tally is active. Cue/tally information is transmitted to any pan/tilt/zoom/focus joystick controllers being used and can be forwarded to the camera. Remote channel selection and remote monitor switching can also be performed.

Camera Corps will be represented at NAB Show 2011 by senior staff from the company's London HQ along with colleagues from US distributor and rental agent Bexel.