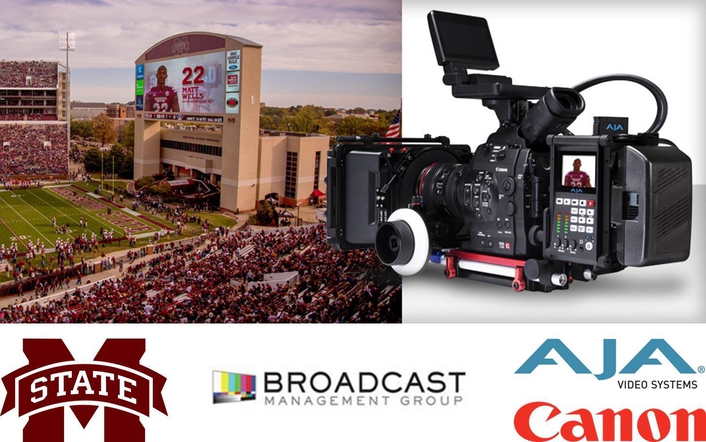 .
Broadcast Media Group (BMG) is a full service production shop based in Starkville, MS. The company works with clients nationwide, and also provides production services for projects to sister company Tellos Creative, a full service advertising agency. For the past three years, BMG worked with client Mississippi State University to produce a :60-second in-stadium video that plays on massive 110 foot screens at the beginning of each home football game. This year, BMG also produced the video of player’s headshots that introduces each player in the game’s lineup.

BMG has been a longtime AJA customer, using multiple KONA, Io 4K and T-TAP products in its studio over the years. For this latest project, the BMG team relied heavily on a portable AJA Ki Pro Quad 4K/UltraHD 2K/HD ProRes recorder.“In order to capture the headshots for the stadium screens, we shot each player on green screen with a Canon C500, pushing out a true 4K signal to the Ki Pro Quad. We opted for a higher resolution, so that we could reframe and maximize our flexibility with the image, and then scale down and crop to deliver high-definition,” said Robbie Coblentz, CEO/Executive Producer, Broadcast Media Group. “The resolution and color fidelity of the Canon C500 pushing out a 4K Raw signal, combined with the debayering of the Ki Pro Quad, gave us fabulous resolution and great color.”

The production process started with BMG’s shoot in Mississippi. They delivered 4K files from the shoot electronically to Russ Fairley Productions, Inc. in Toronto, Canada, who produced the motion graphic animations that display each player’s name, high school and hometown, which fill in the screen foreground and background. The final animations were composited by BMG and delivered to the in-house production team at Mississippi State University. As the football lineup changes week to week, MSU would combine the player clips in various configurations. Since the players’ schedules are limited, another benefit of capturing their video headshots in 4K to Ki Pro Quad was having high enough resolution and image fidelity to isolate single frames that could possibly be used for web and print purposes. 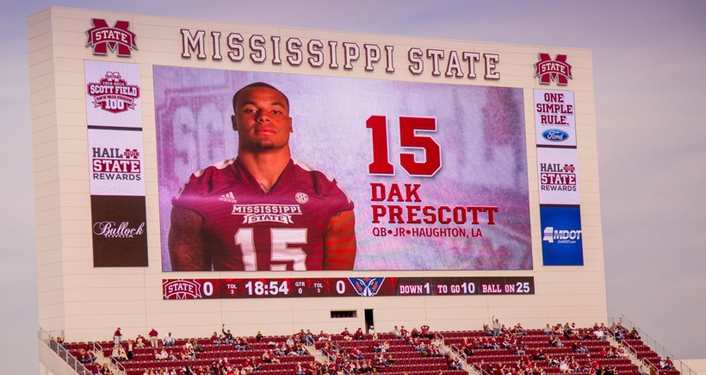 “Having the 4K signal pass with Ki Pro Quad’s high fidelity and resolution was instrumental in getting a great looking key and final picture to hold up on those huge screens,” continued Coblentz. “Ki Pro Quad is the latest in a long line of AJA products that have been key to our productions over the years—and it doesn’t disappoint. AJA’s products are incredibly robust and reliable. On the odd occasion where there is some sort of technical hurdle, their customer service and rapid response is unparalleled.”

Mississippi State Football games began airing the new BMG-produced video clip in August of this year; the team is currently ranked in the top 5 in college football.Ki Pro Quad is AJA’s compact, solid-state recorder that enables 4K/UltraHD and 2K/HD workflows and easily mounts to a variety of cameras. When paired with the Canon EOS C500, it accepts 4K RAW output over SDI as a data stream and performs real-time debayering (the reordering of sensor data into recognizable RGB images) to record footage in ProRes 444 or ProRes 422. Encoded files are stored on AJA Pak modules (256GB or 512GB removable SSDs), which can be plugged into an AJA Pak Dock Thunderbolt and USB 3.0 reader, and uploaded to compatible computers for instant use with non-linear editing solutions from Apple, Adobe, Avid, Autodesk and more.