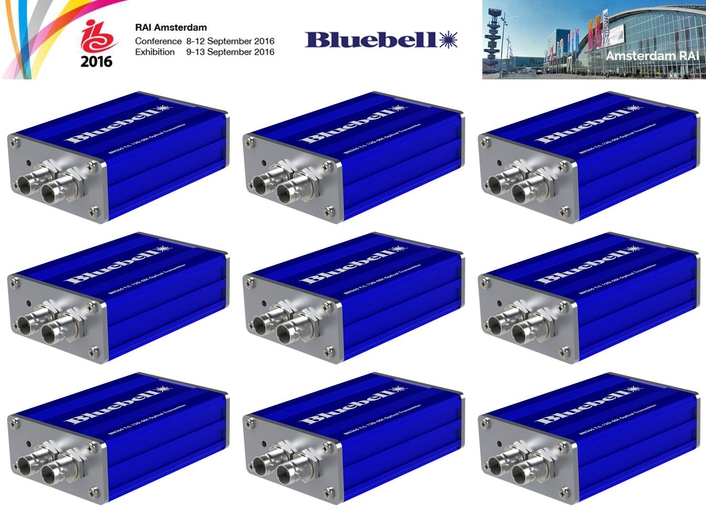 Bluebell Opticom Ltd., provider of innovative fibre optic solutions for fixed and remote applications, today announced a suite of products that provide a single coax or fibre connection to a 12 Gbps SDI video interface for 4K/UHD applications. Such a connection gives broadcast studios and outside broadcast operators a SMPTE 2082-compliant, one-cable alternative to the cumbersome quad-link HD solutions required for 4K broadcasts today.

"We developed this 12G-SDI UHD solution as a direct result of conversations with customers, who have expressed frustration at the lack of single-cable, 12 Gbps SDI connectivity on the market for emerging video equipment related to UHD production," said Paul McCann, managing director, Bluebell Opticom. "This solution will help our broadcast and OB customers — especially those involved in high-end sports-TV production — not only to save time and money when rigging, but to more easily take advantage of some of the capabilities that 12 Gbps 4K monitors have to offer."

The current method of transporting a single 4K signal is to send four 3 Gbps SDI signals over four separate cables (one signal per cable). Bluebell's 12 Gbps SDI solution reduces the cable count for a 4K signal from four to one, which reduces the complexity of the setup considerably. Furthermore, the Bluebell solution makes it possible for customers to use 12G 4K/UHD monitors to troubleshoot source signals in 4K before transmitting an IP stream.

Bluebell's suite of SMPTE 2082-compliant, 12G-SDI-capable products includes the BC365, the BN365, and the new BC390. The BC365 card is a dual-channel 12G-SDI link over single-mode fibre. Its stand-alone counterpart, the BN365, is a compact, single-channel 12G-SDI interface unit for remote throw-down applications. The new BC390, being launched at IBC2016, is an interface card to support 4K/UHDTV. It will provide an infrastructure transport system not only for quad 3G-SDI and two sample interleaves, but for serial 12G-SDI on both copper and fibre as well. It will also allow for a very high density of 3G-SDI signals to be multiplexed onto one fibre.

Both the BC390 and BC365 are modular cards designed for Bluebell's BC Series 19-inch rack-based system. They can be used with any other card in the range to build a complete optical infrastructure that links remote 12G-SDI cameras with Gigabit Ethernet, audio, data, and sync signals.

Bluebell will demonstrate its suite of 12G-SDI-capable products at IBC2016 on stand 10.F24. All products come with a five-year warranty.

NEP, Mobile TV Group, Others call for 12Gb SDI Option
Infrastructure for 6G and 12G SDI signals
The Millenium Signature 12 Made Its Maiden Broadcast at the 24h of Le Mans