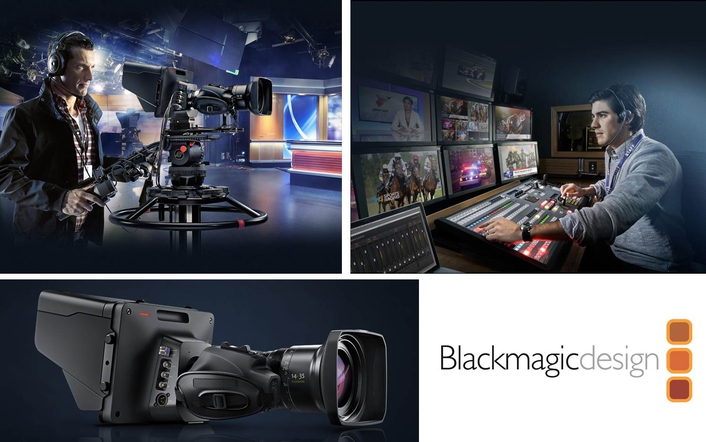 Now customers with ATEM production switchers can control their cameras via the SDI connection
Blackmagic Design today announced the immediate availability of ATEM Switchers Update 6.0 which adds support for controlling cameras from ATEM production switchers via the program feed to the camera. ATEM Switchers Update 6.0 is available now free of charge from the Blackmagic Design website.

Until now the ability to control cameras from the live production switcher was only available to extremely high end broadcasters who had the costly infrastructure that allowed this feature. With the new ATEM Camera Control software update, ATEM live production switchers can now control cameras via a new open standard protocol sent to the camera via the return program feed.

This means the switcher operator has incredible control over the cameras and not only can settings like focus and iris be remotely set with extreme accuracy, but the operator has full lift, gamma and gain controls in full YRGB colorspace just like a full color corrector. Now any colorist that is familiar with DaVinci Resolve color grading can use their creative skills on live production work.

This new ATEM Camera Control with color correction will allow customers to not only get perfect matching between cameras on live production, but operators can also take into account changing light conditions, which is common on outdoor events. Then when customers need to generate creative looks, such as for music videos, they can push the correction further for exciting looks all in real time. 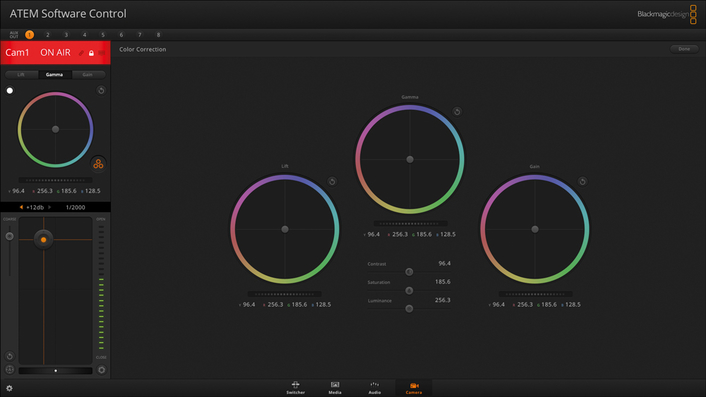 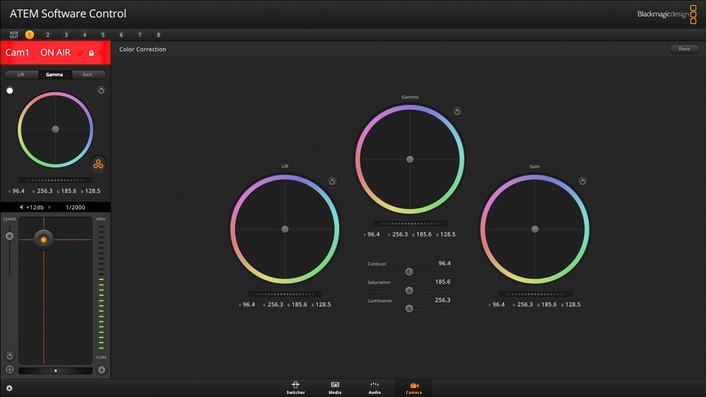 The stylish control panel in the ATEM Software Control allows normal operation of the ATEM live production switcher, but then at any time the user can select the camera tab and then see the controls for each camera. They get a familiar CCU style of interface with easy control of black and iris settings on the camera as well as focus. When controlling a camera, this camera is automatically output using one of the switchers aux. outputs so the operator can use this aux. output to local monitoring.

When more refined and creative looks are desired, the user can then push a button and the CCU style interface will expand out to a fully featured primary color corrector interface, that allows color grading using an interface very familiar to any DaVinci Resolve colorist. Every setting creatively is the same as DaVinci Resolve as the processing is the same. With the color corrector built into the camera, customers get much greater creative control because the color corrector gets full bit depth and colorspace direct from the camera’s sensor.

“Since we first demonstrated the ATEM camera control, the response has been amazing, and broadcasters have quickly recognized the advantage of the Blackmagic Studio Camera’s design and interoperability with ATEM switchers as well as the incredible color corrector built right inside the camera itself!”, said Grant Petty, CEO, Blackmagic Design, “Now they can have full control without running any extra cables using the new SDI based protocol. All that is required is a single thin SDI optical fiber or SDI cable. This is not just a simple CCU style of color adjustment but a full featured DaVinci primary color corrector built right into the camera itself. The benefit to the customer is that exciting creative looks can be achieved in live production, that previously were only possible in post production. I’m very excited to release this software and cannot wait to see what people do with it creatively!”

Availability and Price
ATEM Switchers Update 6.0 with the new camera control features is available now for all ATEM live production switcher customers free of charge for download from the Blackmagic Design web site. To use this software with the new Blackmagic Studio Camera, the Blackmagic Studio Camera will also require the latest software update 1.8.2 or later that is also available free of charge.