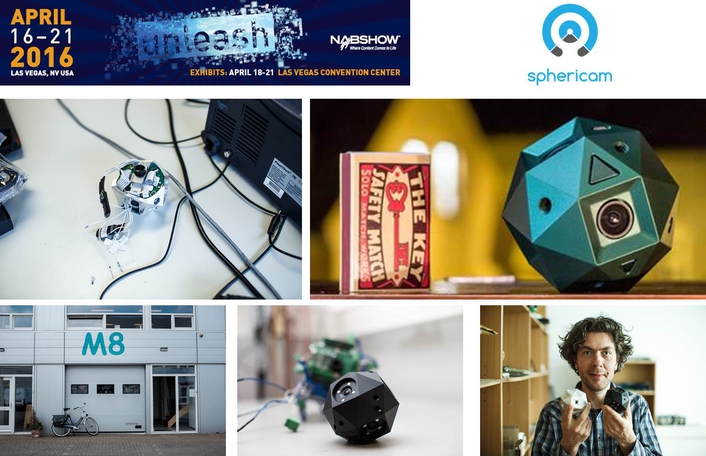 At NAB 2016 in Las Vegas, European start-up Sphericam has announced that it’s going into full-scale production in the U.S. this summer with the world’s first self-stitching 360˚ VR camera capable of live streaming in 4K. The camera, called Sphericam 2, is roughly the size of a baseball and will retail for a mere $2,500 but packs in market-leading features such as 360˚ video recording at 60 frames per second.

Sphericam 2, the world’s first 360˚ VR camera capable of self-stitching and livestreaming 4K video in real-time will start shipping this summer. Full-scale production is scheduled to begin at a U.S. production facility this July following a successful Kickstarter campaign and new $5 million investment from China’s Kingnet Technologies.

“The Sphericam 2 is like no other camera on the market. With a global shutter capable of shooting at 60 frames per second and the ability to self-stitch and livestream 4K video, it sets a new bar for performance. It’s also incredibly compact, roughly the size of a baseball. We designed the camera with professionals in mind which is why we’re thrilled use our presence at NAB to announce it will be available this summer” says Jeffrey Martin, Sphericam founder and CEO. The National Association of Broadcasters trade show in Las Vegas marks the first time the public will be able to view a live demo of the Sphericam 2.

The camera was first announced on Kickstarter in 2015 where it received backing of $450,000, more than four times the initial target.

“Our Kickstarter backers and pre-order customers will be the first to receive the Sphericam 2 once it ships. We also have large media and technology companies eager to start using the camera. The recent investment from Kingnet helps us not only accelerate our production timetable but to broaden our product and service portfolio,” says Martin.

The Shanghai-based online and mobile gaming company Kingnet is investing $5 million as part of a new strategic focus on VR content.

“We invested in Sphericam because it’s clear that it’s more than just a VR hardware company,” Wang Yue, CEO of Kingnet Technologies.  “Sphericam is building a bridge between people’s real-world experiences and the VR space. The Sphericam 2 allows people to capture and share 360˚ video in a format that’s perfect for today’s virtual reality headsets and this is only the beginning.

About Sphericam
Founded by American photographer Jeffrey Martin along with Dutch hardware specialist Servaes Joordens and software specialist Poppo Wit in 2014, Sphericam is dedicated to building groundbreaking 360˚ cameras to create original content for virtual reality platforms and interactive online media. The company’s newest product, called Sphericam 2, is an immersive capture device capable of self-stitching and streaming live 4K video at 60 frames per second. The company has offices in Prague, Haarlem (just outside Amsterdam), Haaren (near Groeningen) and Ljubljana.