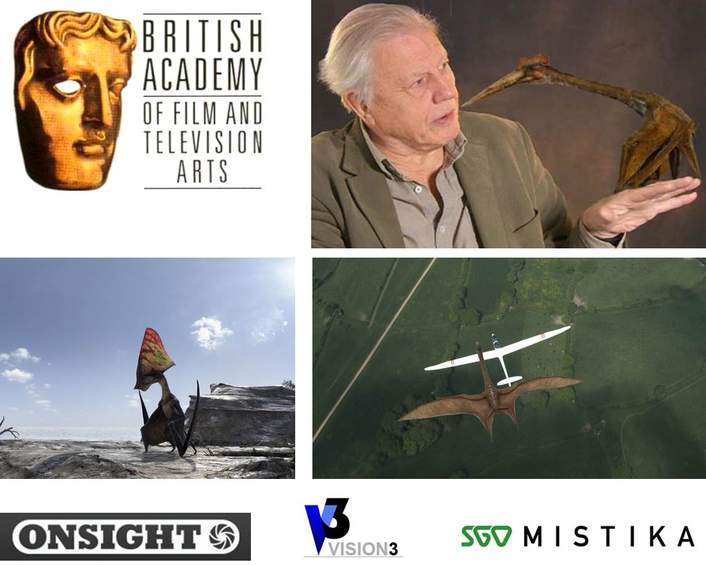 “Flying Monsters 3D with David Attenborough” post produced at On Sight, becomes first stereo 3D programme ever to win a BAFTA
SGO is delighted to announce that breath-taking Flying Monsters 3D with David Attenborough for Sky 3D, became the first 3D documentary ever to win a BAFTA for the Specialist Factual category. Sir David Attenborough's venture into the prehistoric era brings a magnificent view of an unobserved world, back to life on 3D television and the giant IMAX screen, through the latest cutting-edge technology, including SGO Mistika, the most powerful stereoscopic 3D  toolset in the industry.

Mistika was used for all the stereo 3D, 2D and 3D IMAX post work,  by London's On Sight.  Leading UK HD and S3D specialists and renown for using innovative technology, On Sight, chose Mistika for this high profile project which involved multi deliverable formats.

Due to the enormous scale of the project, On Sight networked two Mistika systems together on super-performance Hewlett Packard Z800 workstations and 24" monitors in order to improve efficiency where the online workload could be shared in real-time.  This set-up, using Mistika, enabled the Mistika VFX & Stereo 3D Artists, Andy Lee and Miguel Caamaño at On Sight to work on specific tasks and thus maintain efficiency.  One would work on a depth grade in one Mistika, while simultaneously, the other Mistika operator would work on a stereo correction, which substantially accelerated the process.

Sir David Attenborough had a clear idea of the story he wanted to tell, but to shoot at a resolution suitable for both 3D television and 3D IMAX was a challenge.   The footage was shot in multiple world-wide locations by DoP, Tim Craggs,  using the RED ONE camera in 4K.  The challenge was to bring extinct pterosaurs back to life in CGI while conveying the story in stereo 3D.The location footage and CGI had to be carefully integrated, in particular for one of the final sequences where Sir David glides with a 50ft wingspan pterosaur. Owing to Mistika's innovative stereo 3D technology and many teams working together, project goals were achieved with striking results.

Large amounts of visual effects footage for the programme was received using Mistika, and simply dropped it into the documentary effortlessly. The stereo 3D finishing work, which Mistika managed powerfully and seamlessly across the workflow at On Sight, included stereo quality control, conforming, colour matching, colour and stereo 3D depth grading, stereo fixing and compositing.

Angus Cameron, founding partner and post stereographer at Vision3 said: “It is important that stereo 3D projects can be handled as efficiently as possible in post, to encourage programme makers to embrace the medium. Mistika is an important tool when it comes to making this a reality. “Flying Monsters 3D with David Attenborough” was a ground-breaking project for both television and the big screen that presented a range of exciting challenges, which we were happily able to meet.”

Andy Shelley, COO of On Sight stated: “ The Mistika platform, supported by Hewlett Packard Z800 workstations, provided incredible flexibility, efficiency and stereo 3D workflows, which allowed for real-time adjustments, which was great for the client to be able to see immediate results in the finishing suite.  Mistika's incredible power in stereo 3D has opened opportunities for film-makers to create exciting content now and in the future.”

The visually stunning “Flying Monsters 3D with David Attenborough” IMAX Première took place earlier in May at the BFI in London and is now showing at IMAX cinemas across the country in Stereo 3D.