Broadcast infrastructure specialists Axon Digital Design is using the BVE platform to showcase a range of 4K products and production tools that are designed to help broadcasters deal with the challenges of this new format.

As momentum gathers for Ultra HD 4K television, the company has introduced new additions to its Synapse signal processing line including a 4K up, a down converter, a distribution amplifier and two production ‘Tool Boxes’. Both production Tool Boxes (U4T100 & U4T140) carry Vanc and Hanc data such as timecode and embedded audio. The U4T140 also provides a Dolby E encoder and decoder.

At BVE, Axon will also highlight the success of Cerebrum, its broadcast control and monitoring software. 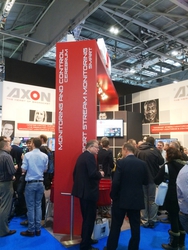 Cerebrum's ability to control complex productions with ease has already proved invaluable to broadcasters such as CTV Outside Broadcast, which deployed it for this year's Open Golf Championships in Scotland, and Gearhouse, which used it on the latest series of I'm A Celebrity. Other recent installations include News UK’s broadcast facilities in London, Metro TV in Indonesia, eTV in South Africa and BT Sport/Timeline TV, which has paired Cerebrum with its Axon 4K tools on board its new OB vehicle.

Axon will show Cerebrum in a studio environment with SMART DVB, its platform for live MPEG-2 and DVB transport stream reporting. Launched earlier this year, SMART DVB is a complete suite of tools to monitor, report and analyze live MPEG-2 and DVB transport streams. Powerful and versatile, the SMART DVB suite enables owners and operators to ensure health, conformity and quality across the digital distribution chain and to drive performance at the highest level. Leading organizations such as Arqiva, M7, ASTRA, NPO/BVN are already successfully using SMART to monitor and analyse the quality of their DVB operations and boost performance.

With IP and the next generation of standards a critical industry focus, Axon will highlight the ongoing work on 4K and S2022 by showing Utah Scientific routers that deliver SDI and S2022 content.

Axon is currently collaborating with industry bodies such as the EBU, SMPTE and IEEE to develop new standards for IP workflow and has already delivered proof of concepts to demonstrate S2022 and Ethernet AVB backbone working effectively in live IP production environments. The company is now encouraging customers and other manufacturers to take part in an open discussion on interoperability and how these formats could shape production workflows in the future.