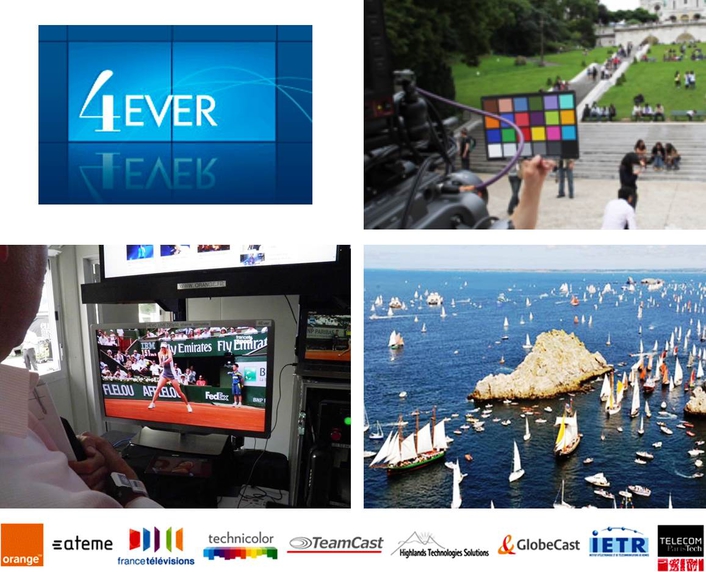 On the one-year anniversary of the creation of the 4EVER Consortium, ATEME, a global leader in advanced video compression solutions for the broadcast industry, announced today the accomplishments and future plans of the project. The 4EVER consortium was formed one year ago with the primary goal of paving the way for delivering an enhanced television experience to viewers regardless of the viewing context, such as in the home, on the go, as well as in public areas and cinemas.

• HEVC Compression Standard: Within the first year, 4EVER research was focused on applying the new HEVC compression standard throughout the entire television delivery chain, to leverage bandwidth savings on today¹s broadcasts and enhance video quality at today¹s data rates. The efforts of the first year culminated in an end-to-end trial during the 2013 French Tennis Open.

• Presenting the First Trial of the New Codec: The findings from the first trial of the new codec will be presented to several prestigious scientific communities, including:
- The 105th meeting of the Moving Picture Experts Group (MPEG), a working group of ISO/IEC, in Vienna, July 29 ­ August 2, 2013.
- The 15th International Workshop on Multimedia Signal Processing of the IEEE (Institute of Electrical and Electronics Engineers) at the MMSP 2013 conference in Sardinia, September 30 ­ October 2, 2013.

• Future Plans: Leveraging the wealth of 4K UHDTV content collected to date, the consortium will now undertake a series of quality evaluations in collaboration with the European Broadcasting Union (EBU).

• Subjective Testing: Using state-of-the-art methodologies developed by Orange Labs for subjective testing and evaluating the quality of experience for viewers, this new phase in the research will determine more precisely the benefits for viewers of 4K UHDTV compared to HDTV, depending on various factors such as viewing distance and bitrate of the broadcast. New 4K UHDTV captures and experiments will of course continue in parallel.

• Standardization: 4EVER consortium members will continue to actively contribute to standardization initiatives by the International Telecommunication Union (ITU), Society of Motion Picture and Television Engineers (SMPTE) and Digital Video Broadcasting project (DVB), focusing in particular on color space, frame rates and bit depth with the goal of enhancing the television experience through future standards, not just with higher resolution images.

• Next Trial: The 4EVER consortium will prepare a new trial around a high profile event in the Spring of 2014 to once again evaluate the state of the art in television production and delivery, featuring HEVC, Ultra HD, and celebrating the second anniversary of the project.