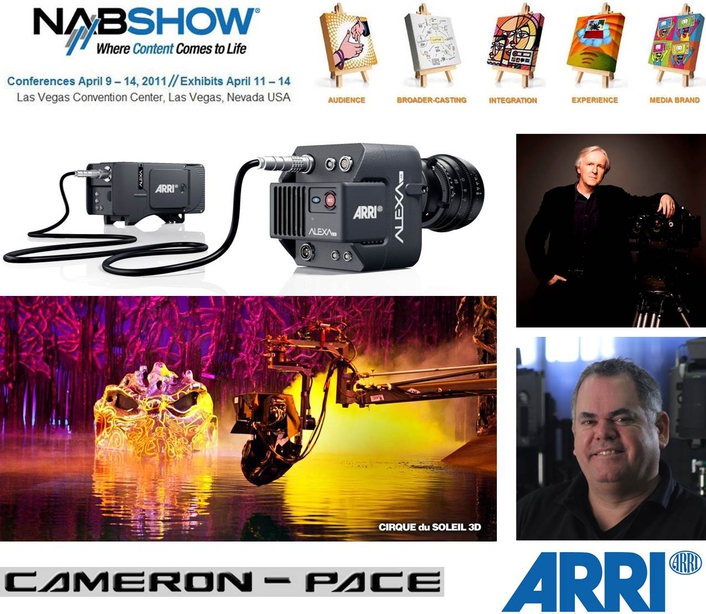 Vince Pace and James Cameron are respected worldwide as innovators and leaders in 3D technology
ARRI is proud to extend its relationship with the CAMERON - PACE Group (CPG) by announcing a cooperative partnership in the development of the ALEXA M camera system, due for first concept showing at the NAB Show 2011 in Las Vegas, Nevada. Since the launch of the ALEXA digital camera in June 2010, leading directors and cinematographers have adopted the camera as the most sophisticated solution for digital cinematography.

ARRI Managing Director Martin Prillmann comments, "The ALEXA M camera system is designed for mobile 2D and 3D camera configurations, offering the same unparalleled image quality, reliability and workflow options as all other cameras in the ALEXA product range. The CAMERON - PACE Group will have exclusive commercial access to the first systems to be made available in September 2011, pioneering its use in a variety of exciting 3D productions during which the design will be enhanced and optimized with new 3D application features unique to the CPG/ARRI collaboration. Serial production and sales release of the ALEXA M to all customers will commence during the first quarter of 2012."

Vince Pace and James Cameron are respected worldwide as innovators and leaders in 3D technology such as the FUSION 3D system and SLATE²SCREEN™ 3D production services, with more than 25 global feature productions completed to date.

Pace and Cameron quote: "We both understand the challenges of 3D go well beyond the technology. In many instances, both the director and cinematographer are embracing the transition from 2D to 3D at the same moment they are evolving from film to digital. With the recent introduction of the ALEXA on our 3D rigs for HUGO CABRET, we witnessed a new beginning in the world of 3D cinematography. The transition from film to digital became a transparent background to the task at hand – that of creating the look of the film. As both digital and 3D mediums mature, more time will be spent on promoting the essence of filmmaking and not the differences in the technology. ALEXA is a supremely creative tool in this process and a huge step towards the maturity of digital cinematography. ALEXA M will further revolutionize the production of 3D content for broadcast and cinematic applications."

Pace and Cameron further confirm, "We have selected the ARRI Group's rental companies as a collaborator in the identification of opportunities for ALEXA M systems, and during the fall of 2011, will work jointly to place CPG and ALEXA M technology on key productions world-wide."

CPG is a trend-creating technology and production services firm. CPG is advancing the future of 3D across all media channels by making the most advanced products, support solutions and creative tools available and accessible to networks, studios, broadcasters, filmmakers and creative teams around the globe. The company is singularly dedicated to building upon the strong foundation of innovative technology developed by its visionary co-founders, James Cameron, Vince Pace and Patrick Campbell and leveraging its unmatched 3D expertise to help content producers realize 3D's full potential as a creative and powerful storytelling medium. CAMERON - PACE Group was founded in 2011 by James Cameron and Vince Pace and is headquartered in Burbank, CA.

Located in Munich, Germany, Arnold and Richter Cine Technik (A&R) was founded in 1917 and is the world’s largest manufacturer and distributor of motion picture camera, digital intermediate and lighting equipment. In 2001, ARRI was converted into a public limited company; it is involved in all aspects of the film industry: engineering; design; manufacturing; production; visual effects; postproduction; equipment rental; complete turnkey lighting solutions and both film and sound laboratory services. Manufactured products and technologies include professional digital acquisition with the ALEXA and ARRIFLEX D-21 cameras; film camera systems for 16 mm, 35 mm and 65 mm; location and studio lighting fixtures; digital imaging solutions such as the ARRISCAN, ARRILASER and various archive tools. These products and services are offered through a global network of subsidiary companies, agents and representatives.