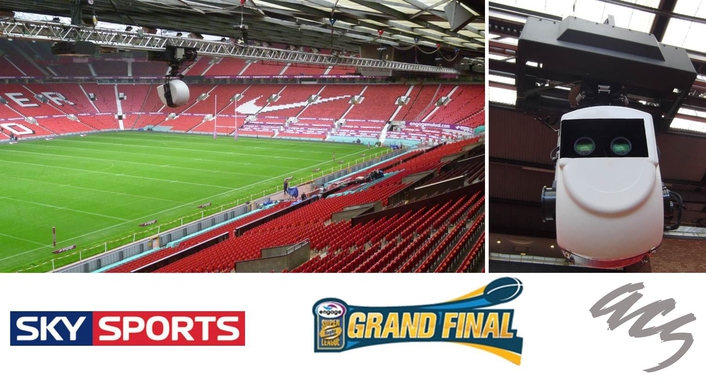 SKY Sports coverage of the Super League Grand Final from Old Trafford had a new rig this weekend in the form of a 3D flown railcam system. In previous years, ACS has successfully provided a 100m flown system for Sky Sports’ 2D coverage of the Grand Final using a HD Cineflex V14 stabilised camera mount to provide a unique and dynamic view of the action below. This year, Sky Sports upped the challenge by requesting ACS provide the same view but in 3D.

After further development and testing, ACS supplied a specially configured 3D gyro mount, comprising of a STAB-C Compact stabilised head mounted with an ET Pulsar rig in a side by side configuration and fitted with two Sony HDCP1 cameras and Canon HJ22 lenses. An ACS Telecast Copperhead fibre transmission system fitted to the railcam camera buggy allowed all signals and control data to be routed back to the OB via a single SMPTE cable.

The railcam operator and stabilised mount operator were positioned within the stand with a clear view of the pitch and the railcam itself, whilst full control from the convergence position in ACS’ dedicated 3D OB unit was carried out using a Sony MPE 200 3D processor to aid mechanical and optical alignment. Capable of moving at speeds up to 8m/second, not only did the track and mount play a significant part in Sky Sport’s 3D coverage of the game, it also featured heavily in the simultaneous 2D coverage of the event with a HD feed taken from the ‘left eye’ of the rig.

ACS has made a significant investment in the development and delivery of 3D specialist camera systems and has provided facilities for the 3D coverage of Horseracing, Rugby, Premiership football and live music events amongst others.

About Aerial Camera Systems
Established over thirty years ago, Aerial Camera System (ACS) is the worlds’ leading specialist camera company, providing innovative and expert camera solutions and aerial stabilised camera systems. ACS has a unique inventory available for rental ranging from remote heads and compact cameras, railcams and wirecams to tracking vehicles, underwater systems and tethered airships as well as over 20 plus helicopter camera systems. With an in-house research and development team the company continues to develop and launch new concepts and products within the field of specialist camera facilities, the latest being its new remote head; SMARThead™ as well as considerable developments in 3D specialist cameras. ACS is part of the Euro Media Group, Europe’s largest provider of television and film facilities in Europe.