On 19th June, the 4KREPROSYS* consortium led by AMP VISUAL TV won a prestigious European distinction: the Excellence Award for Multimedia, attributed by the European organisation Celtic Next (Eureka programme), for the results of its collaborative R&D programme : TV 4K production approach for RF and remote control productions. 4KREPROSYS offers a new solution to 4K TV production that meets both studio and outdoor technical needs using an “all-IP” approach, which also solves some of the issues related to bandwidth constraints, compatible frequencies and UHD transmission response times.

AMP VISUAL TV is one of the main major technical filming service provider in Europe who contributes to the technological developments of the audiovisual industry. As a result, AMP VISUAL TV initiated and coordinated the 4KREPROSYS consortium, which brought together ten major players – technological companies, industry players and academic research teams – from four countries (France, Belgium, Switzerland and Finland) to work on an ambitious R&D program. Its objective was to define new ways of using ultra-high-definition (UHD) formats, in particular, to the development of recent HEVC encoding and IP transmission technologies with very low latency. These, in turn, solve the problems associated with bandwidth and performance constraints encountered in UHD content production.

Going beyond the research stage, the 4KREPROSYS consortium has developed an integrated and comprehensive operating system (hardware & software) that can be used in the field to capture audiovisual content in HD, UHD and UHD HDR formats ideal for covering large-scale sporting events such as cycling, marathons, triathlons, etc. in RF. In July 2018, AMP VISUAL TV successfully set-up, tested and managed daily RF 4K transmission feeds for 1 month in more than 12 different stadiums during an important international event in Russia.

“I am very satisfied with this European collaboration, which is a real success. It is an honour to receive an award at the highest level for a cooperative R&D project conducted in the audiovisual sector. It rewards AMP VISUAL TV's desire to continue to focus on innovation in order to serve our customers to the best of our ability,” explained François Valadoux, Technical Director at AMP VISUAL TV.

The 4KREPROSYS project reaffirms European expertise and facilitates the deployment of the process abroad. Labellized by the Eureka Celtic Core Group, the consortium financing has been made possible thanks to the authorities who support innovation in each country and co-finance Celtic projects (the DGE in France, InnoSuisse in Switzerland, IWT-Flanders in Flanders, Tekes in Finland) and innovation clusters, such as Cap Digital. 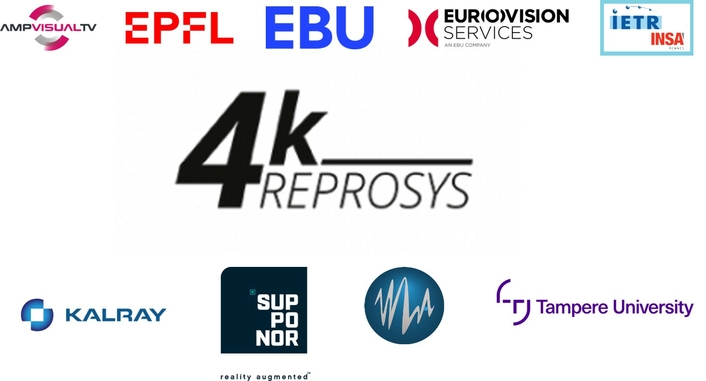