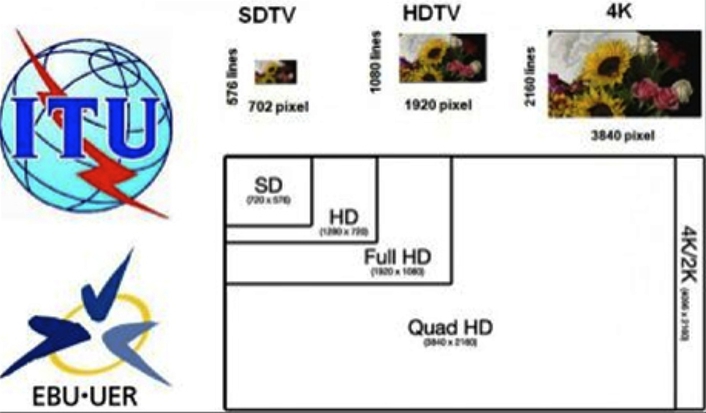 The relative sensor size comparisons between SD, HD and 4K (source ITU/EBU)
A lot has been written in the industry trade publications regarding 4K in the last few months. Lets take a look at what and where 4K is today: There are essentially two 4K imaging formats today- one was developed for digital cinematography with a 1.86 to 1 aspect ratio, 4096 x 2160 lines and the second, technically referred to as UHDTV with a 16x9 aspect ratio, 3840 x 2160 lines. A majority of today's 4K cameras shoot in the 1.86 to 1 ratio.

4K cameras produce four times the number of pixels as a standard HD camera, and require four times the bandwidth of 1080p HD- or 12gbs vs. 3gbs, hence the nickname Quad HD.

Today there are several 4K cameras available with models from Sony, JVC, RED and Arriflex - all shoot in the digital cinema aspect ratio. None actually output 4K video on a single connector, instead breaking up the 4K signal into four quadrants output on four BNCs. Remember, as a digital cinema camera, their design goal was to record files for post production. Frame rate can also be an issue as not all 4K cameras can shoot higher than motion picture's twenty-four frames per second standard.

The 4K cameras all have a single large sensor, roughly four times the size of a two thirds inch HD sensor found in high end HD production cameras. This large single sensor changes the depth of field characteristics from the standard HD camera, reducing it by the factor of four. Digital cinema does not use long zoom lenses like the B4 mount HD 86x, instead the longest PL mount zoom on the market today is a ten times zoom. B4 mount lenses can be used with adapters with a resultant loss in sensitivity on the order of two stops. In conjunction with the adapter, there is resolution loss in the corners of the image when using a traditional HD lens on a 4K camera.

From a workflow perspective, it's evolving. For digital cinema, the cameras output as RAW unprocessed files with no color correction, color balance or black level set–all of which is intended to be done in post. For live, those technologies are under development including CCUs for the cameras with traditional functions video production requires such as iris, paint, color balance, enhancement, skin detail, power, intercom, returns and tally. Today there are no practical large scale 4K production switchers, routers, monitors, graphics generators or other infrastructure. Manufacturers are attempting to judge market demand for live multi-camera production.

Think of 4K today as about the same place in time as HD was in the early 1990s. In HD'd case, serious live multi-camera sports ad entertainment HD production across multiple networks until 2003.