Sony functioned as general contractor during the FIFA World Cup 2014 and was responsible for all HD outside broadcasts – as was the case for the FIFA Confederations Cup, which served as a test trial of sorts. In its role as general contractor, Sony broadcast HBS using more than 300 HD cameras. Together with FIFA, Sony produced the tournament’s official movie in 4K, which recapped select games, including the final. The movie’s 4K content was made available online after the World Cup through FIFA’s distribution channels. Fans could also preview the movie at Sony’s booths inside the World Cup stadiums and at FIFA’s official HD public viewings in 4K/60p. In Germany, a compilation of highlights aired in Ultra HD via more than 200 partners. 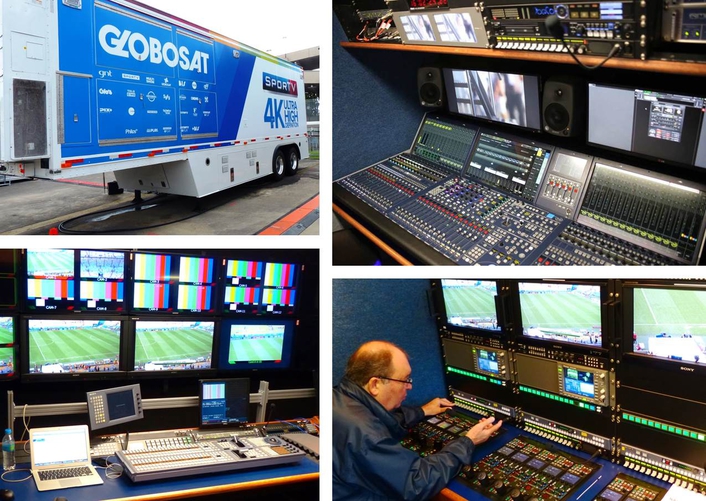 4K Live Broadcast
The last four games in Rio were recorded – the first as a test, the last three aired live, including the quarterfinal between Germany and France and the final on 13.07.14. The productions were not telecast in the usual sense. Rather, games were broadcast in the Vue Multiplex Cinema in London’s Westfield shopping center.

This 4K cinema event was made possible by the cooperation between Sony and Vue Entertainment, which worked with technical partners IDC, Eutelsat and DSAT Cinema to carry out the satellite broadcast, signal coding and 4K projection. While DSAT Cinema was responsible for the supply and integration of equipment, including the network, and receiver configuration, IDC provided the 4K-UHD-HEVC video decoder and satellite receiver for installation in the theater. This receiver picked up the 4K satellite signal and transmitted it in the form of video and audio signals to Sony’s cinema projector, as well as to the audio system. Eutelsat received the signal from Brazil through its teleport outside Paris, allowing it to encode the signal in Ultra HD HEVC with 60 images and broadcast it directly in the theater through the satellite EUTELSAT 5 West A. Images appeared on the screen via Sony’s SRX-R320 projector, which can also show 2K, 4K and 3D images. Vue cinemas throughout Great Britain are outfitted with Sony’s 4K digital theater projection technology.

Over the course of multiple 4K sport productions – including the Tennis Championships at Wimbledon, the French Open at Roland Garros and especially the Champions League Final in Lisbon – it became clear that large broadcast zooms made for 2/3“-HD broadcast cameras in connection with 35mm sensors and the adapters necessary for 4K broadcast productions could not be employed usefully.

The options were either a lens designed for HD, whose picture was inflated for the 35mm sensor using an adapter – diminishing quality in light and other factors; or, using only a sequence of the 35mm sensor, which resembled a 16mm sensor. But 2/3“ cameras include three sensors and more than one CMOS, whose picture then has to be debayered. The decision was then made not to use HD-Zoom with B4 mount adapters. While transitioning to HD, operators had problems focusing their cameras, as they weren’t able to assess the picture on existing monitors. With 4K, the problem did not go away but was mitigated thanks to various focus assists. »However, it requires an experienced cameraman who thinks ahead and knows exactly how fast he has to pan the focus«, said Timm Stemann. In this regard, the broadcast production mirrored the events on the film set, where experienced focus pullers with increased resolution are needed more than ever. Often more than the budget directors want to acknowledge. 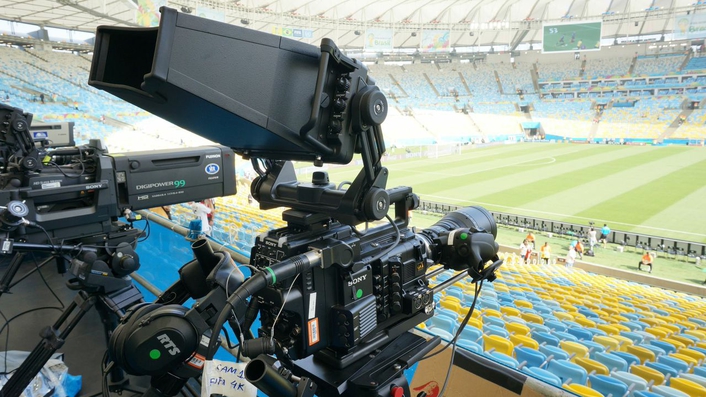 For control from the operating center, Chrosziel’s Aladin BC was connected to Sony’s fiberglass adapter CA-4000 so that the power supply could also be conducted through the camera. All versions of Aladin, by the way, can be supplied through the camera. When power supply is weak, a menu item can be adjusted to limit the maximum power consumption, making virtually all cameras compatible. The motors run somewhat slower, but the camera is not overburdened. Timm Stemann: »In practice, operators found the full speed comfortable, but said it wasn’t a highly important feature.« 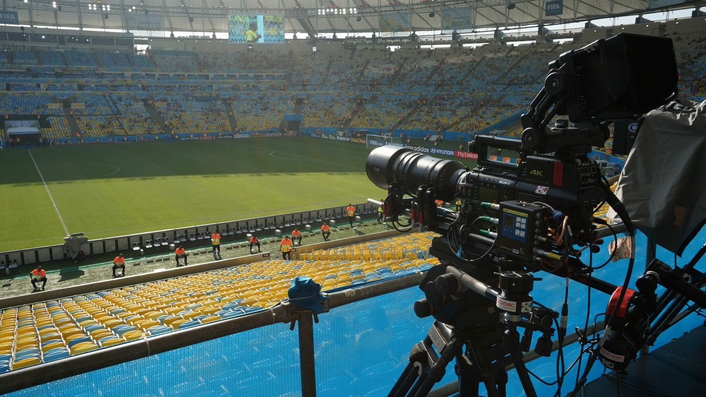 During development of Chrosziel’s Aladin BC, attention was given to stay as universal as possible. »We had six camera positions with zoom- and focus-demands from Canon on site, and four from Fujifilm. In that regard, it was highly beneficial that we could manage both through adapter cables with Aladmin«, explains Timm Stemann. 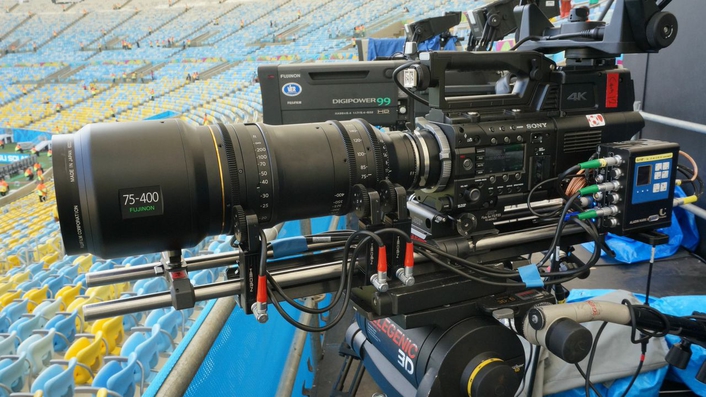 Through the 12-pin Hirose interface, the control signal from the director was reduced for the aperture of the camera and transferred for control of the motors. At the same time, all follow signals for positions of focus, zoom and aperture went back to the camera. This information was available to cameramen at all times in the production truck. Depending on the content, the operator could adjust the strength or aperture of the camera, though the latter would of course affect the depth of field. Therefore, an effort was made to keep the aperture between 6 and 8. After all, not only large focal lengths were employed, but also 35mm sensors for which the depth of field is inherently smaller than the 2/3“ sensors. Timm Stemann: »In some cases, an operator carried three to four cameras and set the aperture and color via sliders or handwheels from the remote control – without additional equipment.« In this way, the 13 cameras were handled by four operators. 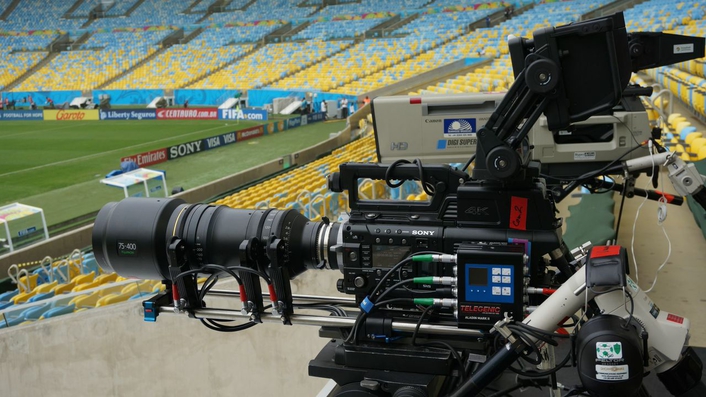 The return and VTR voltage could also be triggered through Chrosziel’s Aladin BC so that the cameraman could continuously switch to the just-sent live picture on his monitor as well as his Talkback. One example that with Aladin, all commands are transferred to the camera.

The original plan was to use eight Cine and four Cabrio lenses. But during setup and testing, it was determined that two more Cine lenses would be used. »The Cabrios are set to 4K. The differences in picture quality are clearly visible but are not so different when compared directly – with small aperture openings and in the same zoom range. However, the zoom range of the Cines is far bigger.«, said Timm Stemann. 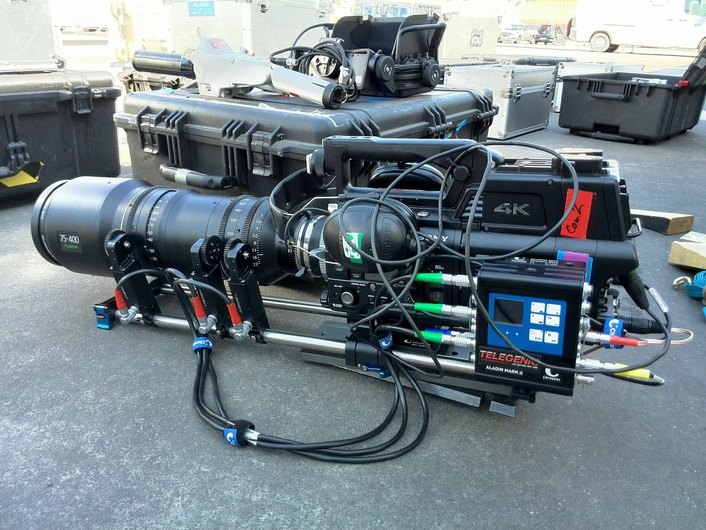 At some point, physics catches up to production quality. Because of their size and weight, the Cine lenses are not operated on the shoulder or with a steadicam. The large ZK-Zoom 12x25 from Fujifilm’s Cabrio family is cheaper than the Cine-Zooms, but it’s also intended for the tripod.

Big zooms are used during HD productions – and for good reason. The light Cabrios cannot be used to replace them during 4K productions. Therefore, Ben Miller (director) decided together with Jon Pearce (coordinating producer, HBS), Rob Thome (4K live specialist, Sony), Pete Bowen (head of camera, Telegenic) and Timm Stemann at the last minute (on Thursday) to use two more big Zooms and two additional Aladins. The cameras left Munich on Friday and landed in Rio on Saturday morning. At 11 a.m., both lenses were set up; at noon, they were tested; and at 4 p.m., they were used live on air. 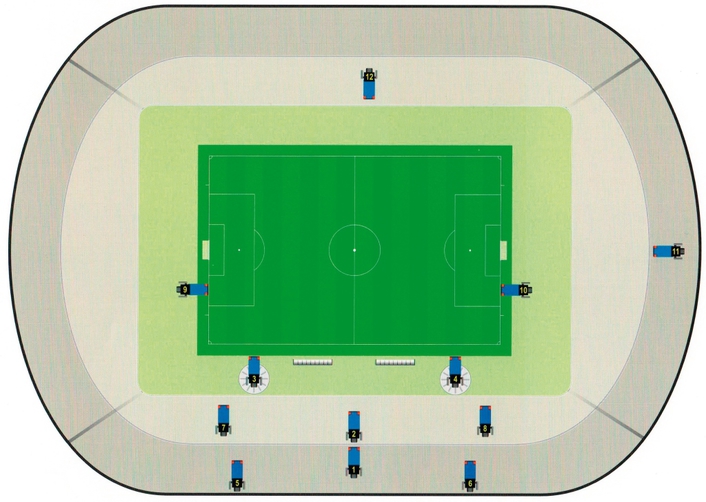 Quicker setup
In addition to the Aladins, Chrosziel rod supports and mechanical components such as lens stands were employed during the operation. With one exception, all tripods were built with Chrosziel parts. »Despite the weight of the big lenses, it is very important not to tilt the tripod while balancing it.« One can  can either remove and attached the plate to a different position or work with the shifting plate from Chrosziel.

Originally, two days were set aside to set up the 12 camera positions in Rio. But the truck did not arrive at the stadium in Rio at 10 a.m. as planned, rather at 7 p.m. That only left enough time to unload and stow away all equipment. »The next day, everything had to be completed in eight hours – and equipment had to be transported over extremely long distances into the stadium.« Setup was conducted at the production truck. The cameras were then driven to the stadium on a golf cart and linked to production control via a single fiberglass cable. 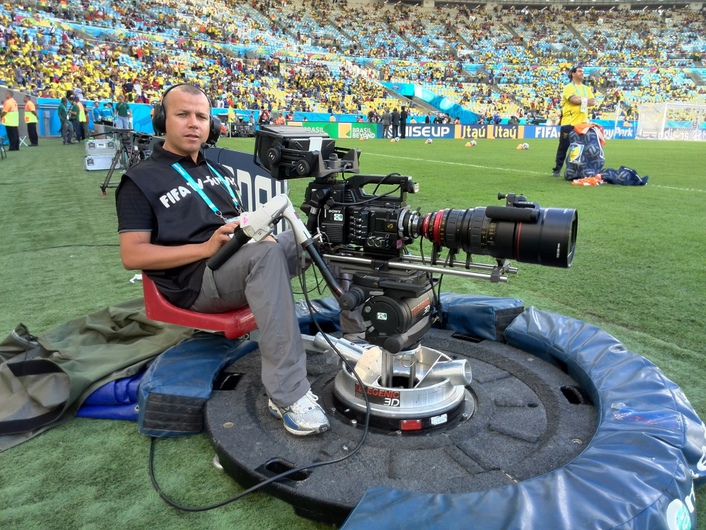 It was also helpful that in the event of a power failure, Chrosziel’s Aladin BC can detect the position of the motor as well as the setting of the end position – without a backup battery. Thus, the camera positions can be switched off at night and are operational immediately the next day without having to be calibrated.

The Aladin needs only about two seconds to start up. The Aladin can also use lookup tables to work with metadata and configuration, which are saved on a USB stick for each camera position. In that manner, the direction of rotation and motor speed were designated – it is common for the motor to be attached to the other side of the lens. »That was also practical because we could quickly load the specific configuration onsite with a software update. The settings could also be applied using the same lenses.« 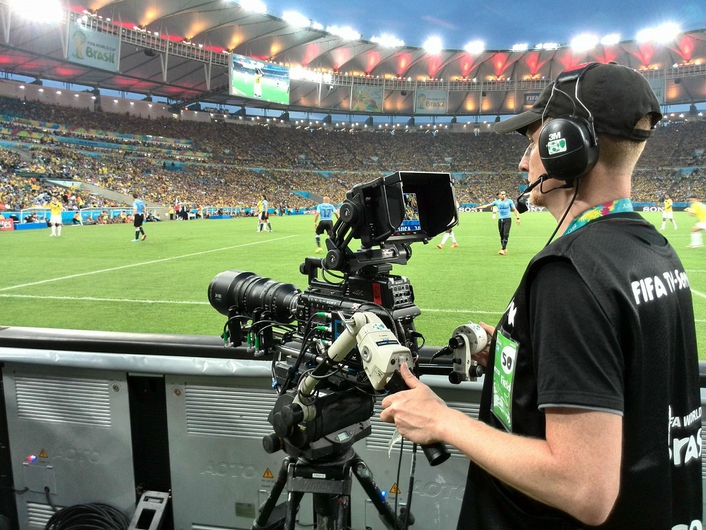 As 4K live specialist, Timm Stemann was responsible for the complete optical imaging. He worked to ensure that the controls functioned, that the camera was balanced and that the back focus of the lens was set correctly. In principle, he served as a camera assistant, only without the task of focusing. Furthermore, he served as a standby repairman in the stadium and was called upon as soon as a technical problem arose.

Unbelievable – all the tasks that are part of standard operations at an event of this magnitude. For example, under the rocker switch there is a setting called »Zoom- Tracking«. Because the setting was activated accidentally, the operator had the feeling that the zoom was running on its own. No problems. During the first run-through of tests, a camera operator thought he no longer had full control of his focus. The solution: The Aladin was employed on steadicams not only  for the 4K production but also for the HD production. With this Aladin, the radio reception was unintentionally left on, and the control module of the steadicam’s focus puller spoke into the 4K camera. Track down the cause, flip the switch, problem solved.

Unfortunately, one lens sustained damage, likely during transport, making its zoom extremely stiff. »We could control the zoom, but not as quickly as usual. But the motors from Heden and Betz were strong enough for us to drive the Aladin with full power.« After the game, the lens was brought to Fujifilm’s service operation onsite, and the problem was fixed for good.

Magnum, the first
During HD productions in the stadium, four steadicams were used. One was focused using the Aladin, another with the new Magnum. As far as Chrosziel knows, this was the first application of a Magnum BC during a major event. The operator had the wrong software and at first had to control the lens with an external motor. But using the new version that Timm Stemann applied to the Magnum, the operator could utilize the Canon handgrip’s internal motor for future projects. 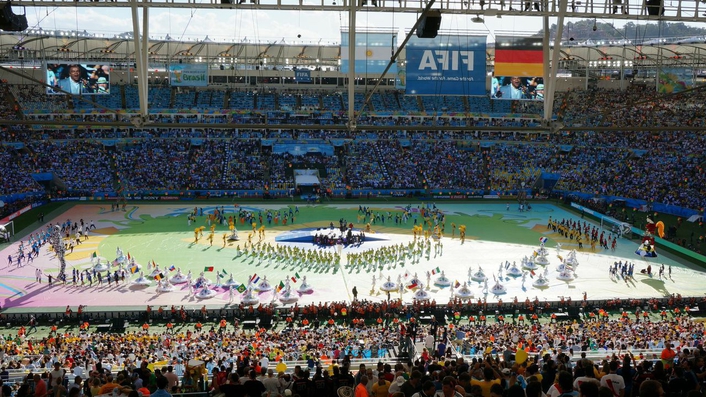 Ultimately, Aladin Broadcast is a package developed from the normal Aladin, the expansion module and the lens port module. As with the Aladin expansion, the Magnum BC – Magnum’s new broadcast version – a module is attached that can be controlled via a connector to the camera and a third motor. The whole thing is about half as big as the Aladin BC and costs roughly half as much.

According to Timm Stemann, the frequency analysis function for steadicam operators was very well received – the function enables operators to see which frequency is being sent in order to avoid interferences and select the optimal radio channel for the cable-free focus puller. Of particular note: The analyzer and also the radio module operate in megahertz as well as in gigahertz. 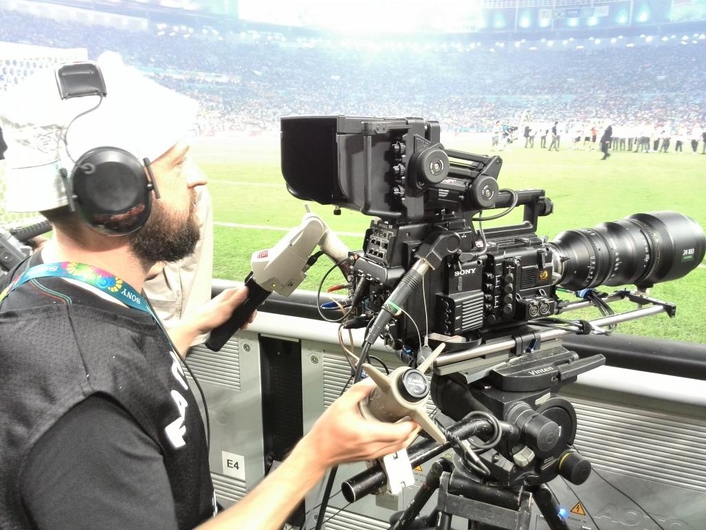 Naturally, broadcasters are still having some problems transmitting the 4K material and delivering it to customers. But Tim Stemann saw it for himself on the monitors onsite: »When the 4K picture is played with a good downconverter in HD, it’s significantly better than the picture with an HD camera. It’s the same comparison as used to be made between HD and SD.«