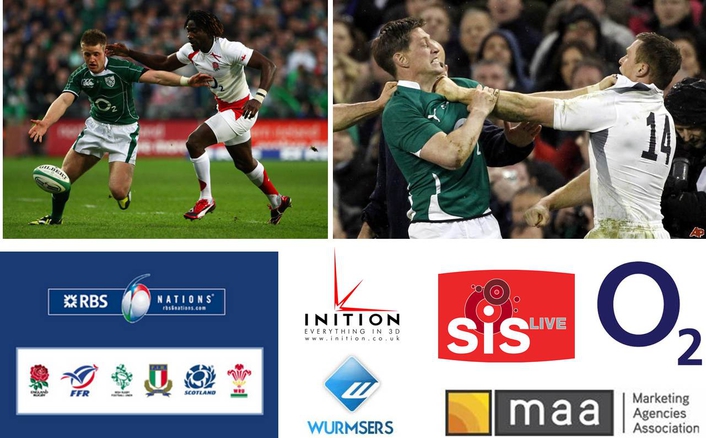 PR coverage from the 3D broadcast and broader campaign created more than £2.4m of equivalent media spend across the world. And the campaign paid back immediately with £250,000 worth of tickets sold to O2 customers. Over 20,000 O2 customers shared the experience and it was a great fit for O2’s brand.

Forty Odeon and Cineworld cinemas screened the matches, beginning with England’s official centenary game, against Wales on February 6, as part of a deal with O2, the England sponsor. The match against Ireland on February 27 also was screened live in 3D.

Using the latest 3D camera technology, the matches were captured from seven camera positions to provide a comprehensive view of the game and included replays, match statistics and on-screen graphics. Inition was working with outside broadcast experts SIS Live and used 3D 'Quasar' rigs from Element Technica for the shoot. Broadcast graphics specialists Wurmsers created bespoke stereoscopic graphics for the game. The BBC – the UK TV rights holder for the 6 Nations matches played between England, Scotland, Wales, Ireland, France and Italy – assisted O2 in the broadcast.

Inition has worked on a number of 3D productions from football and ice hockey to track and music events. Inition were also the 3D experts behind the 3D transmissions of England’s clash with Scotland at Murrayfield, in 2008, as part of a 3D test for the BBC.