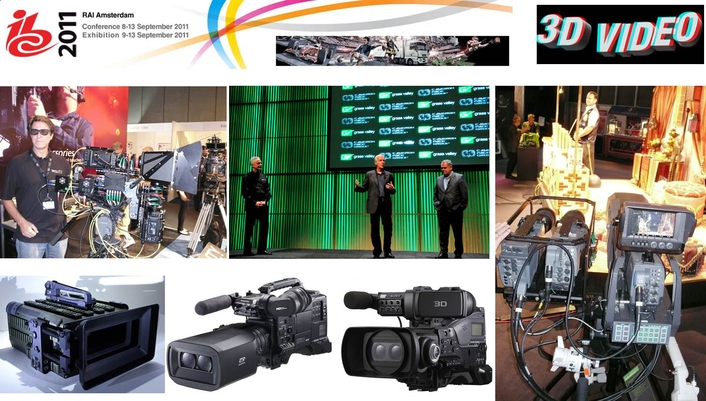 3ality Technica Rigs; Grass Valley - Cameron | Pace Agreement; ShadowD Rig; 3D Camcorders from Meduza, Panasonic and Sony
3DTV was arguably the hot topic at IBC, thanks largely to the presence of James Cameron who made at least six public appearances and explored further in this IBC round up by TVB Europe

The central message from the show was that if 3D is to go mass market then a hardboiled business model needs cementing. The emphasis was on the production aspect of that model in acknowledgement that without practical and inexpensive technology and workflows the content gap needed for 3D channels will not be filled.

“The current phase of 3D began with the clunky, cabled and complex approach,” noted Sony’s senior VP of engineering and SMPTE President, Peter Lude, in a conference session examining 3D’s future. “We are now into phase two which is about greater automation and computer analysis with the aim of making it easier to use rigs, correct errors and reduce manual convergence.”

That is something that Cameron Pace Group (CPG), 3ality Technica and others are working toward in the outside broadcast environment although the substitution of all convergence ops and stereographers by machines, which appears to be CPG’s line in the interests of economic efficiency, is a bone of contention.

“Just as you wouldn’t replace the creative skill of a camera operator who is framing a scene in accordance with the context of the action in front of them, so a convergence puller’s critical judgement can’t be easily replaced,” insists stereographer Richard Hingley.

Greater automation and more agile kit is needed and there is an argument, acknowledged even by their manufacturers, that stereo rigs are a rung on an evolutionary ladder.

“Rigs are large and cumbersome and heavy and a greater degree of electronics will help streamline the systems but quality stereo work can only be achieved using top of the range imagers and mirror systems which give a wide range of interaxial distance and control,” observed Florian Schaefer, product specialist at P+S Technik.

The counter argument can be heard from companies like Meduza Sales which has begun taking orders for its dual lens 4K-capable imager although cinematographers have yet to provide public feedback.

“It’s clear that rigs have a limited lifespan,” claims CEO, Chris Cary. “Today’s S3D rigs are great cousins of the ones invented in 1905. The industry needs to move on and find the next generation which in our view is portable, high resolution, truely flexible systems.”

Panasonic says it has no interest in allying with a rig developer and is also strategising for a day when rigs become obsolete. “Our starting point is to make 3D acquisition easy and mobile,” European Product Manager, Rob Tarrant stated. “That’s what we are doing with our first generation of integrated 3D cameras. With our range you get easier operation, mobile operation and truer 3D because the interaxial distance mirrors what we naturally see.”

Panasonic now has three integrated camcorders on the market, the latest of which the HDC-Z10000 prosumer unit includes a ‘black box’ technology which makes it seem like the interaxial distance between the fixed lenses are adjusted during the shoot.

“One of the issues with twin lens cameras is the fixed interaxial which this macro convergence function helps overcome,” Tarrant added. “With it we can shoot objects as close as 45cm from the lens.”

Sony’s first professional integrated camcorder, the shoulder mounted PMW-TD300 is also shipping priced around €25,000 and with an optional wireless link permitting remote control by MPE-200 processor. Devised by Broadcast RF, the link will make steadicam action more feasible, and is something that Panasonic does not yet offer.

Presteigne Charter made the first purchase in Europe of this unit and will put the RF functionality to test. According to Sony's 3D sports expert, Mark Grinyer: "By using the link the camcorder effectively looks to a convergence operator in a OB truck as if it were a 3D rig. This is something that live 3D sports productions in particular have been crying out for."

3D Rig Tweaks
Rig manufacturers continue to tinker with design to aid ease of use. P+S Technik was showing an adjustable riser as an accessory which enables Freestyle rigs to be tilted up and down. For live OBs the rig can now be integrated with Sony’s MPE-200 and HDFA-200 fibre multiplexer so that all the rig parameters including power, sync and genlock can be managed by a single cable.

Fellow European rig vendors were also showing expanded ranges usually with lightweight versions for steadicam and sturdier ones for mounting heavier camera configurations. As one IBC visitor put it the EU manufacturers “are finally starting to pull themselves out of the hobby market, to build a few rigs and rent them into a proper business world.”

For example, the Production Rig from Screen Plane is now being manufactured and sold by lens control specialists Cmotion with a compact Stead-Flex rig available from year end. Similar to the P+S riser, the tilt angle of the Production Rig can be adjusted from the rig’s centre of gravity in increments of 2.5 degrees. It can also be side-mounted on an accessory devised by Italian firm Cartoni for even greater tilt range.

Binocle’s Brigger I and its bigger brother Brigger II are well respected but still largely confined to the French feature and TV market. They are being put to use on an ambitious semi-fictional feature in the Amazon.

After two years R&D, Bournemouth’s Teletest launched the Binorig, at €10,000 claimed to be the world’s most affordable. “We designed a complete package contained in two flight cases for stereographers or cameramen with little experience shooting S3D,” says MD Nick Rose. “It produces images which are as good as those produced by rigs costing ten times the price.”

CPG Ally with GVG
The star wattage of Cameron and Pace’s IBC presence masked the fact that CPG wasn’t actually exhibiting. It inadvertently masked a little of what could have been IBC’s biggest 3D news which was the merger of 3Ality Digital with Element Technica announced just a week before.

The benefits of the marriage, which unites ET machining with 3Ality software engineering, were demonstrated with Sony F3s mounted on an ET Pulsar connected to a SIP and showing a wide range of data. “It’s great for our customers who have been mixing the two technologies anyway, but they had to integrate them themselves. Now that we can offer them fully integrated technology,” said 3ality Technica CEO, Steve Schklair.

In the show’s biggest news impacting outside broadcasters (signed literally a day before IBC), CPG flagged a partnership with Grass Valley which will see them jointly develop equipment and equip new scanners. CPG runs three dedicated mobile units and has a stock of 100 3D camera systems in the US but its GV pairing will enable it to export its Shadow systems and business model into Europe.

“Our message is that you can use our equipment for 3D just the same as for 2D - there are no special bolt-ons,” said Grass Valley 3D specialist, Lyle Van Horn. “For example, we have internal flipping of the image, standard on our LDK 8000 series cameras, so there is no external processing needed to flip the image and put another kink in the chain when mounting on a beam splitter rig.

The Kayenne and Karrera switchers process each eye as two separate 2D streams paired, so an operator is using the same standard set of buttons for both 2D and 3D. 3D is complex enough without adding a separate set of equipment to do the same job which is why we have the only Super Slo-Motion system, which again handles both 3D & 2D sources with the same hardware (a combination of the Summit server and Dyno replay control system).”

The view that 3D rigs have a limited lifespan for non-live projects at least was given heavyweight support by Walt Disney Studios' VP, Production Technology, Howard Lukk. “There are enough things for the DOP, director and camera operators to try to track on the set as it is, without having to track interaxial and convergence,” he argued. “We are making it more complicated on the set, where I think it needs to be less complicated.”

Lukk suggested a hybrid approach which would supplement a 2D camera with smaller ‘witness’ cameras to pick up the 3D volumes, then apply algorithms at a VFX or a conversion house to create the 3D and free the filmmaker from cumbersome on-set equipment. It is something that Disney is researching.