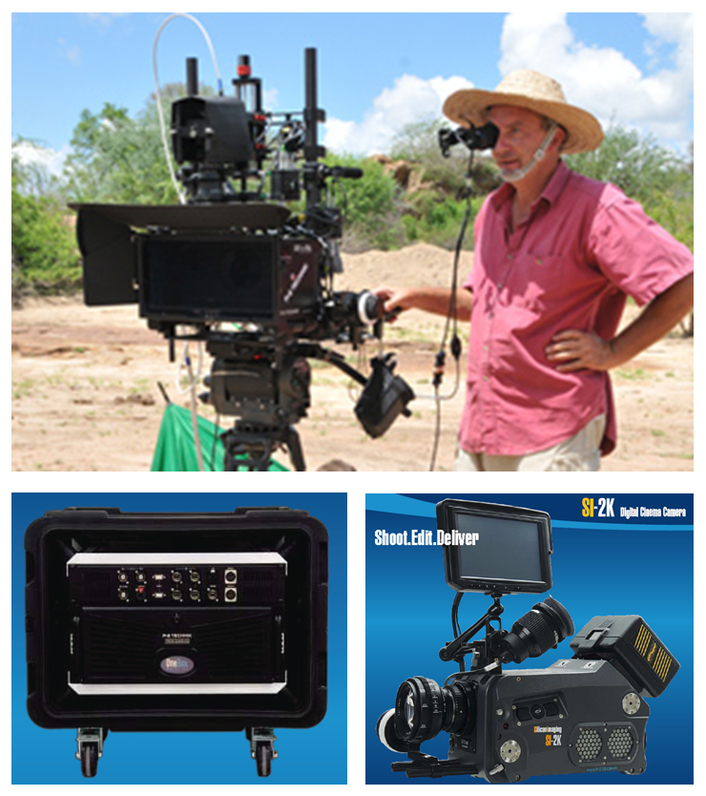 A SI-2K camera, a 3D Standard Mirror rig and a OneBox DIT workstation
World renowned wildlife filmmakers Deeble & Stone have partnered with leading 3D production specialist Inition to co-produce a 3D wildlife pilot in Africa. The shoot took place in Kenya and was produced in association with equipment manufacturer P+S TECHNIK. The pilot is narrated by Sir Ian Holm and will be screened for the first time on 1st June at Dimension 3, Seine-Saint-Denis, France.

The stereoscopic production is a pilot for Deeble & Stone’s forthcoming theatrical film ‘Distant Thunder.’ Set against spectacular Kenyan landscapes the film follows a family of African elephants as they struggle to survive when drought strikes their homeland. Filming took place in Kenya’s Tsavo East and Amboseli National Parks and features a wide variety of filming techniques, from macro to hand-held gyro-stabilized to scenic time-lapses whilst following the elephant family on their epic journey.

P+S TECHNIK supplied a SI-2K camera, a 3D Standard Mirror rig and a OneBox DIT workstation. Silicon Imaging supplied a SI-3D camera system and a Stereotec side by side rig. Initial post and stereo adjustment was conducted on Iridas Speedgrade at Inition– before finishing post production in Spain at ApuntoLapospo. The sound design and mix were produced by Wounded Buffalo, with original score by Guy Michelmore.

3D producer and director at Inition, Andy Millns commented: "It was a real privilege to shoot in Africa with such experienced wildlife film-makers as Mark and Vicky. We all learnt a lot and have come away as a team with a unique understanding of how to shoot natural history in 3D."

Vicky Stone, producer and director of the pilot commented: “It was a first for wildlife filmmaking and it proved the power of the medium. Digital 3D is so immersive and experiential that it is perfectly suited to natural history story telling. We were delighted that it was possible to achieve so much in such a short time - what started out as ‘proof of concept’ rapidly evolved to become a short film. It was an extraordinary and very successful collaboration.”

Anna Piffl, Communications Director, P+S TECHNIK commented: “This was the first use of P+S TECHNIK’s Stereo 3D Rigs for wildlife capturing in 3D. The results are very impressive beautiful images. The shoot proved the usability of P+S TECHNIK 3D rigs in rough backcountry conditions with a lot of travelling, dust and wind.”

See the world premiere of Distant Thunder and meet movie makers Vicky Stone and Mark Deeble in the panel “S-3D cameras, rigs and photography” at Dimension 3 in La Plaine Saint Denis (right outside Paris) on Tuesday, 01.06.2010, 14:00 – 15:30!

See the complete conference program at

P+S TECHNIK, founded in 1990 and headquartered in Ottobrunn, Germany, has earned a reputation as a competent and professional partner for solutions and products of the highest level in the cine world.
Since 2006, P+S TECHNIK develops and manufactures Digital Cinema Cameras and Highspeed Cameras in cooperation with cinematographers and professional hardware and software developers such as Silicon Imaging, WEISSCAM, IRIDAS and CineForm.
Since 2008, P+S TECHNIK is dedicated to advancing realistic 3D stereography for broadcast and cinema together with pioneers in the field, such as Alain Derobe and Philippe Bordelais. By providing 3D Stereo Rigs to suit for anyone and for every occasion P+S TECHNIK has become the worldwide market leader in providing 3D camera systems.
For more information about P+S TECHNIK and its products, please visit