3ality Digital Takes the Headache out of Live S3D 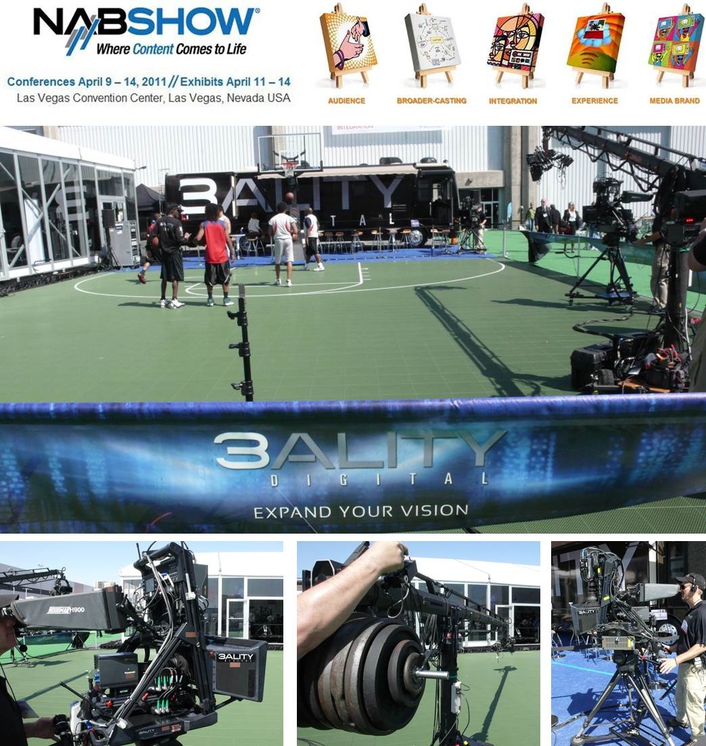 3ality Digital has developed three new products ideally suited to the demanding requirements of live, S3D broadcast environments. All new additions to the 3space™ line of technologies, 3ality Digital took the wraps off IntelleScene™, IntelleMatte™ and IntelleMotion™ systems at their NAB booth #OE1275 from April 11-14 in Las Vegas.

IntelleCal™ automatically aligns the two cameras on a rig at the push of a button, which enables a super fast and precise set up without the intervention of a technician. It does this by profiling and matching lenses and performing alignment on five axes through the entire zoom range.

IntelleCam™ automatically controls the convergence and the interaxial spacing of the cameras, without the need for a separate convergence puller at each rig, cutting the number of personnel needed by half or more – dramatically reducing costs.

IntelleMatte™, the S3D graphics application that everyone has been waiting for, provides S3D production crews the ability to insert a graphic between objects in the foreground and background for true S3D compositing via automated composite scene depth management.

IntelleMotion™ provides real time S3D motion stabilization which enables broadcasters to use powerful long lenses to capture motion from great distances without causing unnecessary viewer discomfort. Since IntelleMotion can compensate for IS/VR tracking, special lenses are no longer required, which opens up the “standard” long lenses that outside broadcasting (OB) clients demand.

IntelleMatte and IntelleMotion are standalone systems that can be used with any S3D Left Eye/Right Eye program feed, and are not dependent on a 3ality Digital acquisition system for usage.

“Viewer experience is a primary concern among broadcasters seeking to deliver 3D content. We’ve tailored these solutions to address some of the core challenges in capturing live events in S3D while reducing the complexity and costs associated with its production,” said Steve Schklair, CEO and Founder of 3ality Digital. “Whether applied to sports, concerts or episodic television, our 3space technologies make it possible to visually capture things that have never been done before in S3D.”

3ality Digital’s technology is already being used on feature films such as THE AMAZING SPIDER-MAN and THE HOBBIT, which are currently in production. 3ality Digital has a history of capturing live 3D sports broadcasts, including the first live college football S3D BCS Championship — January 8th, 2009, the first live S3D NHL broadcast – Islanders vs. Rangers, March 24, 2010, and the first live NFL S3D broadcast to homes – FiOS, Patriots vs. Giants, Sept. 2nd, 2010.

3ality Digital is a pioneer and leading authority in stereoscopic 3D (S3D). 3ality Digital provides the film and television industry with camera platforms, stereo image processing systems and S3D image scaling technologies that are considered the “gold standard” for the production of compelling and immersive S3D entertainment. Whether for a feature film or live sporting event, its innovative technology empowers customers to stay in control of creativity when working with S3D. Founded in 2000 by CEO, Steve Schklair, 3ality Digital has a reputation as an innovator in S3D, with its technology powering multiple live-action firsts. This includes: U2 3D, the first movie shot completely in live-action S3D; the first live S3D broadcast of an NFL game (Raiders vs. Chargers, December 4th, 2008, broadcasted to a select audience); the first live S3D sports broadcast available to consumers, including the 2009 BCS Championship Game, BSkyB’s landmark Manchester United vs. Arsenal soccer broadcast (January 31st, 2010), and the first network hockey telecast ever produced in S3D (New York Rangers vs. Islanders, March 24th 2010 on MSG); the first S3D Super Bowl commercial broadcast on television (Sobe “Lizard Lake”); the first full episode of a scripted prime-time television series shot in live-action S3D (Chuck vs. The Third Dimension, aired on NBC on February 2nd, 2009); and first RED EPIC S3D Movie, 'The Amazing Spider-Man’.