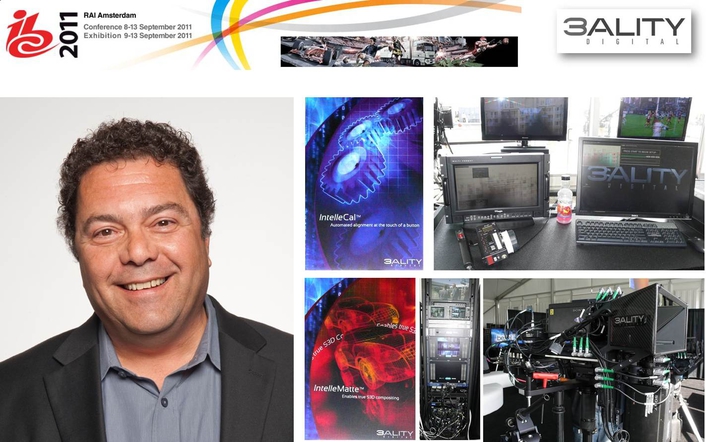 3ality Digital will host their first full presence at IBC 2011 in Hall 9, booth number B40
Steve Schklair, noted stereoscopic 3D expert, founder, and CEO of 3ality Digital, a U.S. based S3D technology company, will speak on Monday, September 12, at 1:30pm in the RAI Big Screen Auditorium during the 2011 IBC event.  His presentation entitled, “The reports of S3D’s death have been greatly exaggerated,” is set to discuss the future of S3D as a genre that exceeds traditional use in big action films and that will take up permanent residence in homes around the globe.

Schklair’s key-note presentation will focus on integrating S3D automation as a way to significantly lower production costs and enhance production quality.  Highlights include Schklair conducting a live demonstration of new technologies that will forever advance and change the look of S3D production.

Schklair contributed to the 2011 book, ‘3D TV and 3D Cinema’, written by Bernard Mendiburu with Yves Pupulin. Schklair recently presented the key-note at 3D Masters in London, at Dimension-3 in Paris, and he provided the key-note at the University of China’s opening of their new 3D school. Schklair is intensely in tune with what is happening in the S3D world as it relates directly to advancements in S3D technology and its applications in a variety of platforms.

3ality Digital will host their first full presence at IBC 2011 in Hall 9, booth number B40, where there will be a full display of their technology and systems including on-going live demonstrations of two new technologies, Intelle-matteTM and Intelle-calTM. The Production Village will also include 3ality Digital systems and technology with a live demonstration of Intelle-camTM.

3ality Digital systems are currently in action on the productions of The Hobbit: An Unexpected Journey, Jack the Giant Killer, and The Great Gatsby among others. The 3ality Digital systems were also used in The Amazing Spider-Man, which is set to be released in July 2012.  The company develops enabling technologies to power live-action stereoscopic 3D (S3D) entertainment from image capture through to presentation.  In broadcast, 3ality Digital is the technology and production systems behind the BSkyB launch of their 3D channel and has been used on a wide range of events including the Isle of Wight Festival, the Ryder Cup, and Champions League Football.