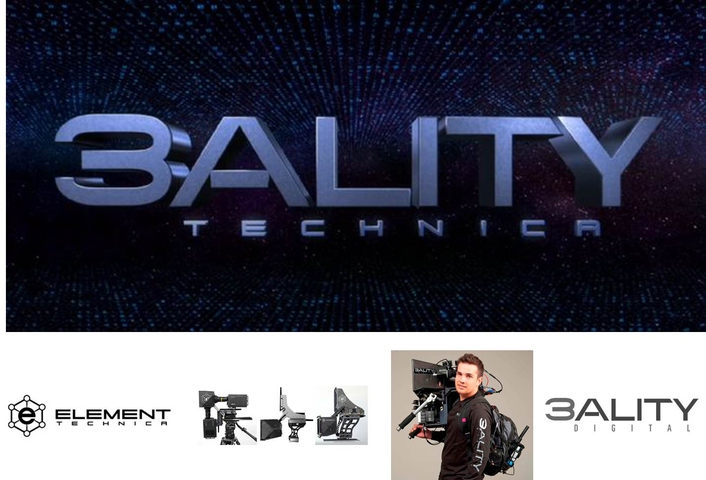 3ality Technica™ steps up its role as the Largest Innovator and Supplier of S3D Production Technology
3ality Digital, considered to be the leading innovator of the most sophisticated S3D production technology in the industry, announced today it has acquired Element Technica, a company long-known for its manufacturing expertise, accessories, and mechanical engineering of motorized S3D camera rigs. 3ality Digital has been named in the 2011 Inc. 500 list and is considered one of the fastest growing private companies in the nation.

3ality Digital is now 3ality Technica, and with its acquisition of Element Technica, 3ality Technica now provides all of the control, accuracy, breadth, automation, modularity, accessories, and design of both existing product lines.

Element Technica’s product line has become synonymous with ease of use, great design, affordability, and durability. 3ality Digital’s product line has become synonymous with precision components, speed of use, incredible accuracy, and advanced image processing. In acquiring Element Technica, – the Company gains an in house manufacturing and design capability, and the opportunity to further expand its already sizable R&D infrastructure. Physically, the companies will combine in an expansion to the 3ality Digital headquarters in Burbank, CA.

“As our primary competitor, we have always had great respect for Element Technica and their achievements. The complete compatibility and lack of redundancy between the companies has made this an ideal acquisition, strengthening the Company’s position to provide the most advanced and dependable S3D solutions to the market. Perhaps the greatest benefit of this acquisition will be to the motion picture and broadcast producers who will now have an unprecedented amount of tools and technology tailored to meet their specific needs” said Steve Schklair, CEO of 3ality Technica.

The combined engineering skills of the two companies will help push 3D production to levels of integration and refinement previously unmatched. Many of Hollywood’s major theatrical releases which have been shot utilizing these two companies systems and technology include “Jack the Giant Killer,” “The Amazing Spider-Man, “The Hobbit: An Unexpected Journey,” “Prometheus,” “Underworld 4,” “Oz,” and “The Great Gatsby.” Also, companies like BSkyB, the world’s leading 3D broadcaster, and the HBS feeds from the FIFA World Cup have based their productions of live events on the backbone of 3ality Technica technology.

“With this acquisition, 3ality Technica will be a decade ahead of the rest of the industry. Not only will automation become more common, it will be the standard as the industry begins to enjoy the simplicity and speed it affords,” said Hector Ortega, Senior Vice President of 3ality Technica.

“Integration will fast-forward as the merging systems require fewer and fewer ancillary components. Compatibility with other industry systems will cease to be an issue as 3ality Technica alone already leads the way in seamless connectivity from post production, to VFX, and live broadcast,” said Stephen Pizzo, Senior Vice President of 3ality Technica.

The combined expertise that forms 3ality Technica ranges from Hollywood feature films and television, to live-broadcast sports events and concert performances, to NASA. It also positions the company to offer the world the most comprehensive advanced 3D educational program (3DIQTM) to filmmakers, broadcasters, and craftspeople.

Element Technica is also well known for their line of both 2D and 3D accessories, and it is planned that this product line will continue under the existing Element Technica banner.

“You cannot believe the level of excitement we all share, but it’s not just us that are so elated. Some of our key customers and partners that were recently made aware of this deal have shared in this excitement as they all understand the benefit this will have to their work. We have already integrated some of the best aspects of both companies’ product offerings, so the market will see an immediate improvement in tool sets, component integration, and customer service,” said Schklair.

3ality Technica is headquartered in Burbank, California, and is the leading provider of stereoscopic 3D (S3D) production products that enable the highest quality live-action S3D. 3ality Technica systems have been deployed for “The Amazing Spider-Man,” “The Hobbit: An Unexpected Journey,” “Jack the Giant Killer, “Oz,” “Prometheus,” “The Great Gatsby,” and “Underworld 4.” 3ality Technica has enabled most of the world’s first S3D cinematic and broadcast achievements, including U2 3D (the movie), and the first live S3D broadcasts from the NFL, BCS Championship, BSkyB, the Super Bowl, the World Cup and NBC television.

In broadcast, 3ality Technica is the technology and production systems behind the BSkyB launch of their 3D channels, and has been used on a wide range of events including the Isle of Wight Festival, the Ryder Cup, and Champions League Football.