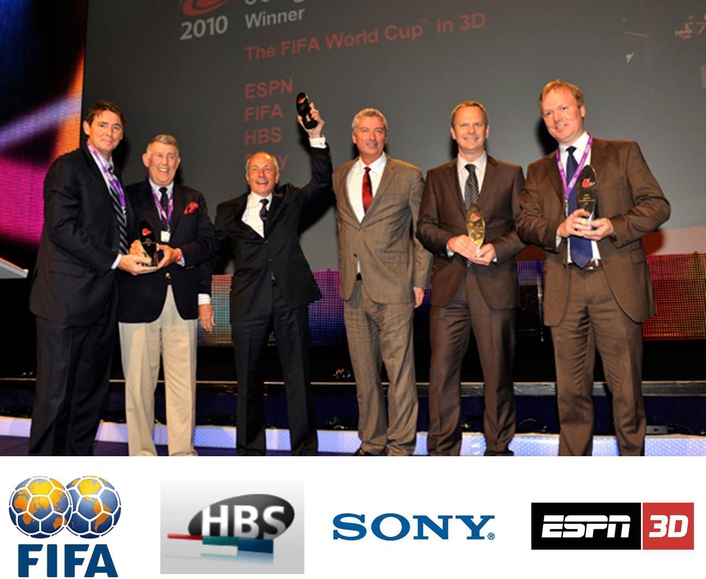 Tim Scanlan & Geoffrey Mason (ESPN), Francis Tellier (HBS), Michael Crimp (CEO IBC), David Bush (Sony), Niclas Ericson (FIFA)
FIFA, Sony, Host Broadcast Services (HBS) and ESPN have jointly won the prestigious Judges’ Award – one of the IBC’s Innovation Awards, at the RAI Convention Centre in Amsterdam. IBC is the leading international forum for the electronic media industry. The four partners received the special prize titled “The 2010 FIFA World Cup™ in 3D” in recognition of their fruitful collaboration which led to a remarkable “first” in sports broadcasting: 25 matches of the 2010 FIFA World Cup™ in South Africa were being covered in 3D.

Teamwork as Key to Success: FIFA, Sony, HBS and ESPN Honoured for their Innovative and Excellent Collaboration

On behalf of FIFA, HBS was producing and delivering the 3D HDTV signal as part of its overall production role as host broadcaster of the 2010 FIFA World Cup™, working closely with FIFA Partner Sony, which manufactures advanced 3D screens and 3D broadcast technology. The production consisted of eight pairs of cameras at every match and two dedicated 3D Outside Broadcast (OB) vans, provided by Sony and specially adapted for the purpose. ESPN, as the “end user”, delivered the fascinating amazing 3D experience worldwide.

The Jury of the 2010 Judges’ Award decided to praise not only the innovative technological achievement, but also the excellent collaboration in short lead time that paved the way for an amazing viewer experience. It was once more the FIFA World Cup™ that is driving broadcast innovation.

“We are proud that this outstanding collaboration is recognised and we see this year's IBC Judges' Award as a challenge to push the 3D technology even further in future", says Francis Tellier. “HBS had been at the forefront of developing 3D in sports production and there was no better opportunity to demonstrate its great potential than at the FIFA World Cup™, where the strongest partners contribute their know-how.” 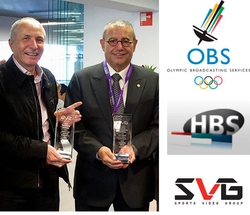 HBS was not only delivering the exceptional 3D experience together with its partners, but also provided broadcasters from all over the world with a high quality feed for all 64 matches of the 2010 FIFA World Cup™. Its strong performance and technical excellence at the tournament was additionally honoured by the Sports Video Group in its 5th annual Sport Technology Reception at the IBC.

3D’s Debut at a World Event

The decision of FIFA to introduce 3D to the broadcast mix follows a series of major technological breakthroughs and successful trials of live 3D sports coverage over the last two years. Once again, it is the FIFA World Cup™ that is driving broadcast innovation, supported by the technical know-how of Sony and HBS. The groundbreaking project surpassed all expectations. In spite of a challenging lead time of just five months to prepare, the technical and production quality was on a very high level.The 3D feed from the 25 matches was made available for broadcast on 3D channels. It was seen by viewers on 3D-compatible TV sets at home. Among the broadcasters using the 3D signal were – besides ESPN in the USA – Sky PerfecTV in Japan, SBS in Korea, Sogecable in Spain, SBS in Australia, Al Jazeera in the Middle East and TF1 in France.

HBS has been taking an active interest in the development of 3D coverage for sport over the last two years. It undertook trial 3D live coverage of the 2008 IIHF World Championship in Canada; the first time that selected games of a major ice hockey tournament were produced in 3D. In April in 2009, it worked with Orange, the leading mobile operator in France, to broadcast the French Ligue 1 match between Olympique Lyon and Paris Saint-Germain live in 3D television from Lyon's Stade Gerland. This was the first live 3D broadcast of a football match in European history.HBS extends a special thank-you to the LFP for enabling tests at L1 matches throughout the 2009-2010 season that explain in part the successful story of the roll out of these spectacular 2010 FIFA Cup 3D deliverables.

Host Broadcast Services (HBS) is a wholly owned subsidiary of the leading international sports marketing agency Infront Sports & Media. As a dedicated, independent host broadcast specialist, it helps sports federations and organising committees worldwide to televise their events in the most exciting way, by offering its highly developed and technologically advanced service, delivering true value for money, on budget and on time living up to his slogan, “Making Broadcast History”.