The two 1x1 Bi-Focus LED lights perfectly set the scene on the stage of the "Augsburger Puppenkiste" for the 3D photo shoot
Richard Walch, a photographer and DSLR film-maker from Germany, usually makes spectacular productions dealing with extreme sports. For a 3D special supplement in one of the largest German newspapers, Richard Walch photographed Germany's most famous puppet theatre: The "Augsburger Puppenkiste".

The troop is internationally known for its films including figures such as Jim Button and Urmel from the ice age. Two 1x1 Bi-Focus LED camera lights by Litepanels, a Vitec Group brand, provided the right lighting during shooting.

3D is not only booming in the cinema

"3D productions are not only once again in great demand for cinematic blockbusters but also for photography," reports Richard Walch. "Three-dimensional lighting is especially important for the stereophotography to get an optimal 3D effect." For the 3D camera from RBT & Fuji Finpix 3D, the versatile and energy-saving lights from Litepanels were the right accessories. Richard Walch supplied the cover photo and more for the special 3D supplement of the Augsburger Allgemeine Newspaper. In numerous impressive 3D photos, the photographer captured the world-famous puppets and their players in the "Augsburger Puppenkiste".

Highest standards of quality and usability 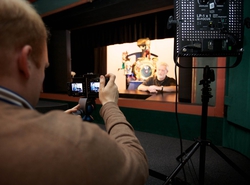 The very slim construction of the Bi-Focus lights allowed for optimal lighting conditions despite the narrow space in the puppet theatre. In particular, the variable spot of the 1x1 Bi-Focus light was a decisive advantage when illuminating the stage and the puppets. "As a photographer, you have the choice of a spot or flood light, or something in between, with the Bi-Focus. This provides the complete range of possibilities and freedom that you need for a 3D lighting situation," explains Walch. The bright light can be dimmed from 100 percent to 0 and can be manually adjusted using the control dial. "In addition, you don't burn your fingers on the battery-operated Bi-Focus lights and can easily look for the right setting for professional lighting conditions. The usability and high quality of these incredibly versatile lights have won me over," says Walch when summing up the work for the 3D shoot.