“Skip The Use”, Latest show of the 3D Live project

Capture and Live 3D broadcast of the concert on February 14, 2012
In 2009, a consortium of industry leaders, research institutes and SMEs formed to tackle together the television of the future. Its objective: develop the French techniques to capture and broadcast live and cultural or sports shows in S3D to achieve a flawless, high-quality user experience. Thus was born project 3D Live, funded by the Department of Industry (DGCIS) and the Ile-de-France region, and supported by three centers of competitiveness, Images & Networks, Cap Digital and Imaginove.

3DLive: 3 years of research and development in service of increased quality for S3D
The Live 3D project, led by Orange and including the teams in charge of research and development in the Orange Labs, consists of specialists among the best in their field: AMP Visual TV, Binocle 3D, Inria, Institut Telecom South-Paris, Technicolor, Thales Angenieux and Thomson Video Networks. It was used to develop and adapt the tools and technical resources to meet the new requirements of live broadcast of HDTV and S3D, a grand debut. In conjunction with the work of R&D carried out in the respective laboratories, partners find themselves on a regular basis on the ground for the “practical work”, to film premium events and also record various dance, theatre, or sporting events (rugby, volleyball) and, soon, music concerts. All broadcast live on the 3D channel of Orange TV (channel 333) and the website of Dailymotion or in a live S3D event.

Latest 3Dlive operation: Broadcast in 3D and a live rock concert
For their latest event, 3DLive partners were able to film and broadcast in S3D a live concert of the rock group Skip The Use, nominated to the “Victoires de la Musique 2012”, in the category “New artist”. This private concert, which took place at 9pm February 14 in AMP Visual TV studios Paris, was broadcast live exclusively in S3D on the Orange TV (channel 333) channel and on the Dailymotion 3D channel.

Human and technical prowess at each event
Each shoot was an opportunity to test the progress of the research and development work in the laboratories of the partners, and further progress in the development of innovative solutions.

On February 14, 3DLIVE partners were committed to generate a very strong sense of immersion through the use of new optical cameras optimized for S3D, leveraging the designs of these innovative cameras which were used on a telescopic crane and a S3D shoulder mounted rig. The setting of these camera rigs was decided by the Director and the stereograph by using Binocle’s Disparity Tagger software, ensuring visual comfort of the S3D. The quality of the S3D experience of the viewer was further increased by using new S3D graphics techniques and special effects for live broadcast.

These changes were thus integrated into the usual setup deployed by 3DLive, namely 4 to 6 linked stereoscopic cameras, connected to the mobile unit in which the Director had immediate selection of the desired unit at each moment. He also directed the camera operators, assisted by the stereographer who himself was in communication with all assistant stereographs and engineers in charge of the control of the S3D, with changes made by software in real time on the data of each of the cameras. The resulting program was then sent to encoders which allowed selected video highlights to be broadcast across several media platforms (TV and/or PC and mobile), through the appropriate channels (internet-fiber/ADSL, satellite).

A team of 30 to 40 engineers, researchers, technicians, directors, operators and stereographs were mobilized for these exciting technical challenges. This experimental adventure has also helped the directors accompanying the project to solidify the imperatives of the direction in 3D, in terms of pace, frameworks and end user experience quality. 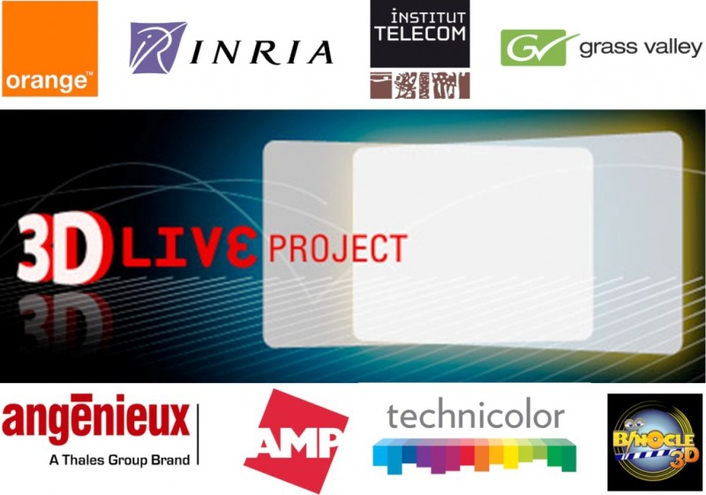 The consortium will develop a full review of the 3D Live project next March. A first success is already clear: the project partners enriched their experience and expertise of live S3D, as well as advanced technical solutions to bring television into a new dimension now, providing a new proposition for viewers of high quality S3D entertainment programs.