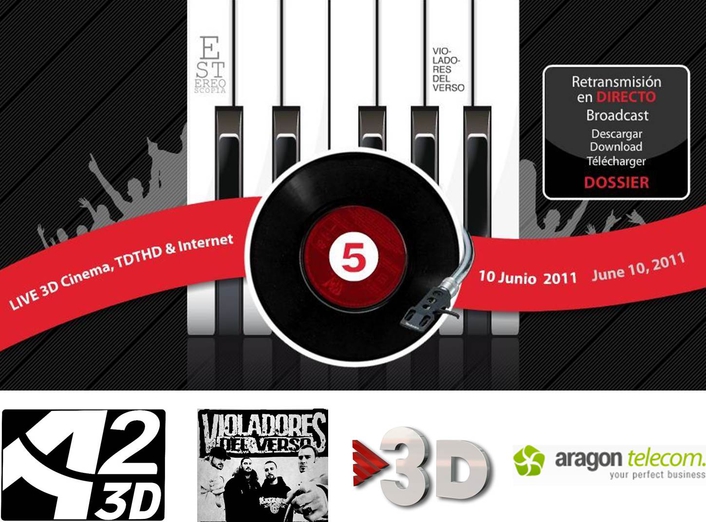 For the first time ever in international media coverage, there is going to be a live broadcast in 5.1 real audio and revolutionary 3D stereoscopy. A large team of technicians, scenography designers, lighting crews, engineers, media experts and TV producers are working together in this nonprofitable experience, held in Zaragoza, Spain, on June 10th at 10pm. Legendary Hip Hop band Violadores del Verso will be generously taking part, mixing rhythms and rimes in their last concert of their successful Vivir para Contarlo Spain tour.

This striking event has been thoughtfully named after the codename Project 5. It holds different meanings for every person involved. This name evokes five years of hard work and technical preparations. Also, it celebrates five years of successful media workshops taught in Aragón, for students from all over Spain. Furthermore, 2011 marks the 5th anniversary of public mass media launching in the region ofAragón, with a public TV and radio service. And finally, this is a toast to millions of fans and followers of Violadores del Verso. The band members are MCs Kase-O, Lírico, Hate (AKA Maestro Sho Hai) and DJ R de Rumba. They are four rap performers who consider their audience as parts of themselves. “They make the fifth band member”, said one of them.

What is 5 aiming for?

Project 5 aims to show the real possibilities of broadcasting live events in stereoscopic 3D simultaneously -Digital TV, Internet and movie theatres. Hence, this is a pioneering experience to make 3D broadcasting a regular way of watching moving images, one step beyond sport events or dull High Definition classical music concerts. As a matter of fact, Project 5 will be a test of what the future of Digital TV would be. This will be called DVB T2, standardise as the most certain substitute for DTV which is in actual use.

Who is working on 5?

Who else can participate?

· MEDIA. Firstly, we do give the rights to broadcast this event to any given national or international network or TV channel around the world, as well as digital cinemas and web sites all over the Internet with live online streaming links. We are seeking a company to show this event in Spanish and Latin American cinema theatres.

· CORPORATIONS. We are also eager to hear from any willing private sponsor interested it taking part in this production. The names of the sponsors will be on theacknowledgement credits and they will have freedom on how to use and market this music & technology event to their own benefit. We are still looking for different ways to spread the event and we want to listen to your ideas. Something big is under-planned to happen in the surroundings of the concert. Check our website or contact us for more information.

· PEOPLE. There will be an online contest in order to find 1200 lucky winners with the exclusive privilege of viewing the gig at the stage venue. Besides, 50 highereducation students will be awarded with a chance to participate as production assistants in this enriching experience.

How can 5 be watched?

There will be several broadcasting options for this concert. A signal will be provided via HISPASAT Satellite, “side by side” 3D Ready format -this is independently from other viewing needs for cinema screenings that we will be providing under demand. Usually, Spanish home viewers have SENSIO 3D Processor in their devices, since the South Africa World Cup 3D experience. Stereo Sound is transmitted in AC3, but this real true experiment will make use of the DOLBY E codec in order to receive 5.1 Live audio, which does give the feeling of being present in font of the stage. The signal arrives encrypted, but it wont be DCI, something our technicians are working on. If the event happens to be broadcast over upcoming 3D TV channels, we do have the means to cater a more than proper 3D signal of the production.

IN FERIA DE ZARAGOZA, PAVILION 4, WICH WILL ACCOMMODATE 4.000 GUESTS AND 1.000 EXTRAS. FREE ADMISSION PREVIOUS REGISTRATION TO THE WEB PAGE www.3d5.tv
600 SPECTATORs ALSO WILL BE INVITED TO ZARAGOZA’S ARAGONIA CINEMAS WITH JOURNALISTS, TECHNICAL AND TECHNOLOGICAL CURIOUS EXPERIENCE. OTHER CINEMAS OF SPAIN, EUROPE AND AMERICA BROADCAST THE ACT CAN BE IN ADDITION TO TELEVISION AS ARAGON TV, DIGITAL + AND FORTA’S CHANNELS IN HIS HD. ALSO IN VARIOUS FORMATS ON INTERNET THROUGH THIS SAME WEBSITE.

Friday June 10th 2011, at 22.00pm Spanish Time (20:00 GMT), from Spain. Live! Do take into account local time in north and South America -at least six hours in advance. Time in some European countries may also vary due to theirlocation.