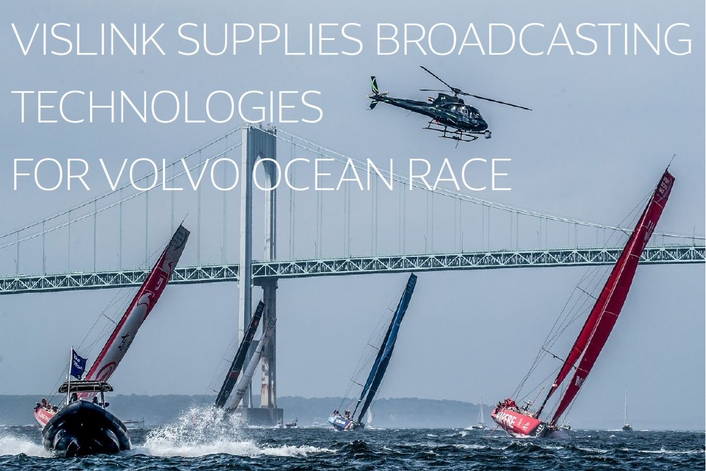 Round-the-World yacht racing is one of the most gruelling sporting challenges a person can put themselves through.

No yacht race comes more extreme than the Volvo Ocean Race – encircling the globe over a course of 45,000 nautical miles, facing waves of over 40m and extremes temperature ranges from -5 to 40°C. The 22m length yachts cross 4 oceans in an event stopping at 12 ports as teams battle it out on racing legs lasting more than 20 days across a global course lasting 9 months. And for the crew, all of this with only a single change of clothing! It is perhaps no surprise that this extreme challenge should become a sporting event made for TV viewing.

The real action comes though, not in mid ocean but in the close-fought in-shore racing that takes place near to port as each leg starts and finishes. In these highly technical battles of skill, teams fight it out to capture every breath of air - manoeuvring and jostling for optimum position around marker boys that form the course.
The 2.4 million visitors to the attractions at the touring Race Village can experience the excitement of the competitive sailing through live images relayed onto giant screens – as well as for global TV audiences.

The ocean is an unforgiving beast - not just for racing teams but also to communications systems. Vislink needed to transmit back to shore, footage from broadcast cameras on the chase-boats and gyro-stabilized helicopter cameras as it happened utilising narrow RF bands across kilometres of ocean. With the sea acting as an RF mirror, the waves and ripples of water combining the reflecting transmissions in an infinite number of disruptive ways, the technology deployed needed to be special. 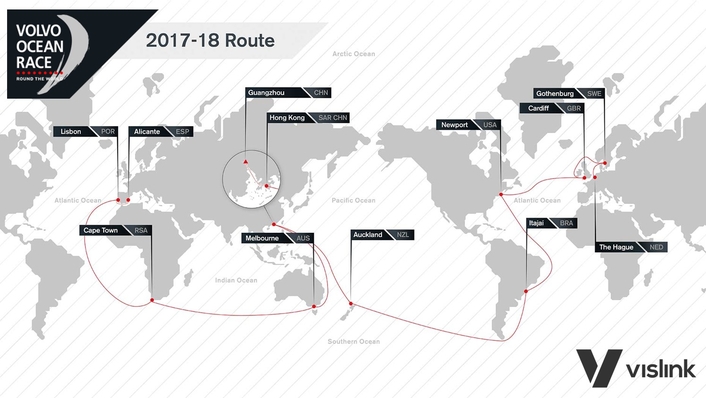 Given the unpredictable effect the sea would have on the transmission, one reception location alone could not be depended upon to give the required performance. Vislink deployed multiple receive sites with combinations of antenna patterns to cover the desired areas on water and on shore, providing geographical diversity. The multi-path reception conditions from the sea and buildings in port created the scenario that whilst some antennas would receive a strong, reinforced signal, others would be in weak signal nulls and that this situation would dynamically change. To get the best performance, Vislink grouped the antennas for a multi-zone Maximum Ratio Combining diversity system. Using this processing-heavy technique, the antenna signals are individually weighted and summed according to their instantaneous signal-noise ratios (SNR) to create a highly reliable data stream.

In order to achieve rapid deployment and installation simplicity as the event travelled from port to port, the RF feeds were demodulated close to the antennas by Vislink L2074 units, the recovered transport streams were carried cross-site on the event’s Ip network via Fibre, Copper and in cases Microwave IP networks to the master control room for video decode by Vislink L2170 units with the camera feeds delivered to the director’s production desk.

As the helicopter camera and camera chase-boats followed the in-shore race action and during port-based crew interviews, different antenna groups would be best placed to be in range of the mobile, wireless cameras. To allow a seamless transition from antenna group to antenna group the Vislink L2170 decoder employed dynamic transport stream, packet switching between the antenna groups to give optimum RF performance and maximum range across the whole event area and for many kilometres out to sea. 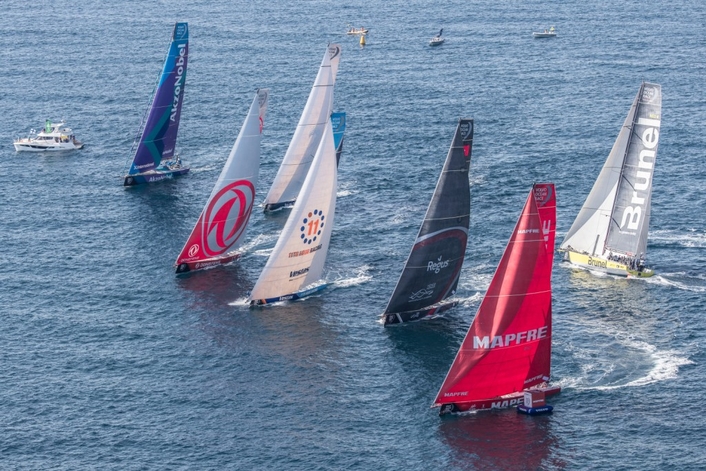 Careful consideration and planning was given to selecting the best wireless camera encoders and transmitters – tailored to each application. The full resolution, high definition feeds coming from the cameras used for the event only had at their disposal narrow 8MHz wireless channels. Vislink equipment brought with it the video compression knowledge to deliver and optimize the MPEG-4 video algorithms to balance the needs of the native 1.5Gbit/s content data-rate against the need for efficient bandwidth utilization and end-to-end latencies as low as 1 video frame.

The Vislink wireless camera equipment maintains and delivers raw camera feed quality content to the video mixing desk by making use of highest quality 4:2:2 chroma profile - ensuring that the images do not degrade as they pass through multiples stages of video processing compression in delivery from the event through to the end TV-viewing consumer.
With camera views expected to contain wide expanses of sky down to the horizon; To combat the posterization effect that can become highly visible on areas of graduated brightness with 8-bit luma processing, the Vislink system employs 10-bit luma quantization to deliver an artefact free picture.

It was important to ensure that all the camera views were carefully matched. The helicopter was equipped with a Vislink MTT3 transmitter – a unit purposely designed for airborne applications.
The MTT3 incorporates a low latency MPEG-4 high definition encoder and in combination with the transmission amplifier is capable of transmitting images over long distances. During the leg arrival and grand depart the helicopter was able to track the yachts and beam back footage from over 70km out to sea. 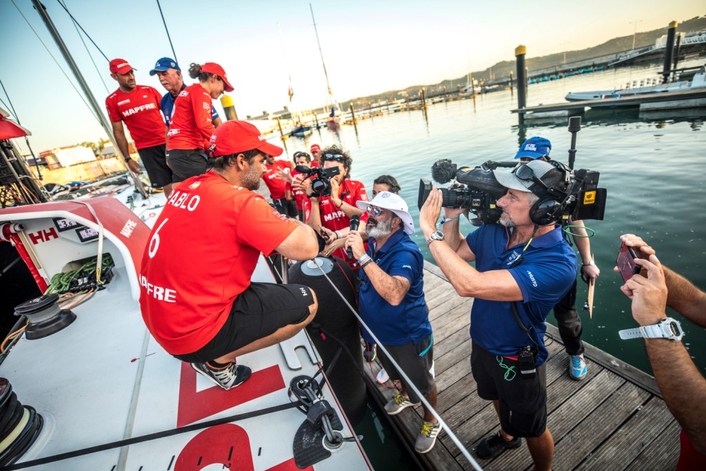 An in-shore race can often be won or lost at the start, as the yachts vie for optimum position - in preparation to cross the start line at maximum speed as the race begins. The chase boats allow the camera operator to get close-in to the action and allow the program Director to show the crews’ battle of tactics and sheer physical strength as they adjust their sails to best harness the wind.
The broadcast cameras on the boats were equipped with Vislink Clip-on 4 wireless camera transmitters. 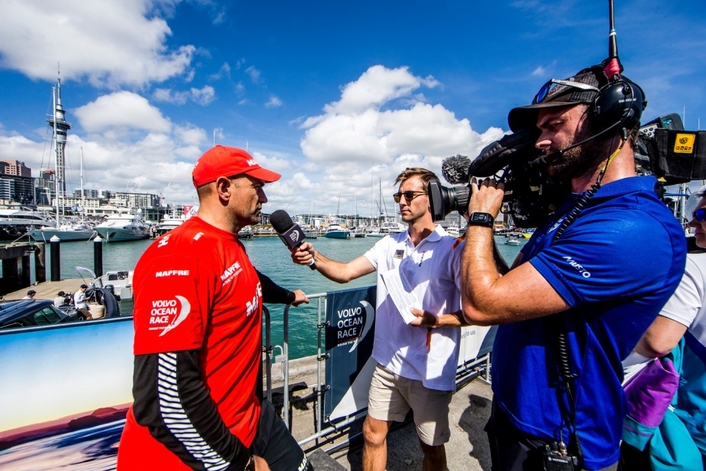 The Clip-on 4 camera transmitters deliver broadcast quality high definition video to match the needs of the giant video walls in the Race Village and to put to air internationally on TV channels. The latency of the Clip-on 4 camera transmitters was configured to match that of the helicopter camera transmissions allowing the Director to cut seamlessly between camera views.
With a range of up to 14 kilometres, the chase-boats with their wireless camera transmitters on board needed their signal boosting when operating at the limit of the boat’s range. To avoid overloading the on-shore receivers, the chase-boat transmission power would require attenuating from maximum as the they tracked the yachts into port and the facilities of the Race Village. The Clip-on 4 wireless camera backs were connected to waterproof Vislink PLTX power amplifiers. These ruggedized devices gave the chase-boats the operational flexibility to manage the transmission power and operational range and be resilient to the harsh marine conditions. 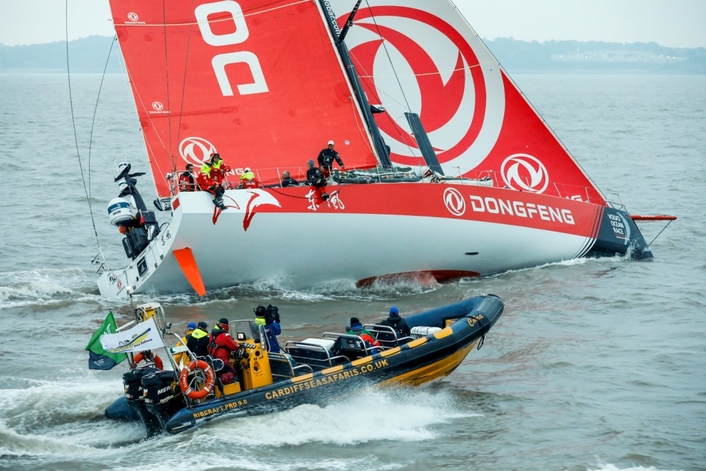 With the in-shore races lasting over an hour - plus build-up and with the yachts taking their different routes across the ocean legs to the host ports, the camera teams need to be out at sea, broadcasting the live action for extended periods. Power efficiency and battery performance becomes a key consideration. The Vislink Clip-on 4 camera system has been designed at its heart to optimize electrical efficiency and deliver extended operation time. This power efficiency is not only of benefit to the production crews but also chimes with the sustainably message that flows through the Volvo Ocean Race where the corporate world is doing its bit to highlight the effect of single use plastics on the world’s oceans and CO2 emissions affecting climate change. Energy consumption used during the race’s activities is monitored and published as part of the drive for the race activities to have minimal impact on our world. 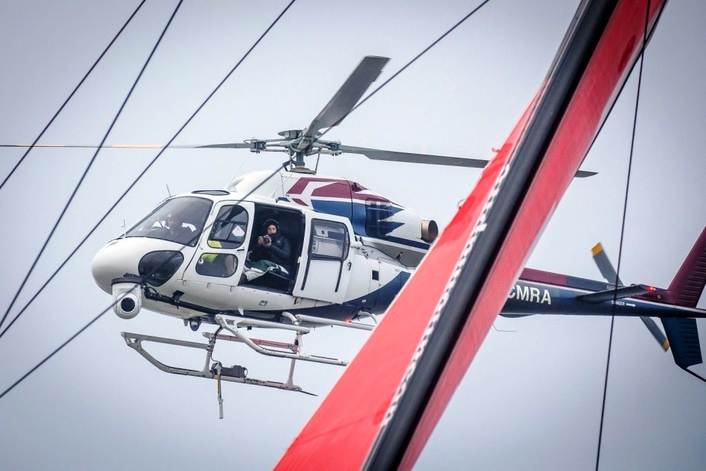 At the end of a highly competitive day’s sailing the crews’ activities turn to rounds of media interviews as they describe the technical challenge of the event and the bursts of frantic activity followed by skilled, fine-tuning to harness every last breath of wind – and do their duty to their corporate sponsors.
The wireless broadcast cameras on the chase-boats are configured so that once back in port the camera operators can instantly repurpose their equipment to capture these media activities for the viewers at the event and on the sports broadcast channels. 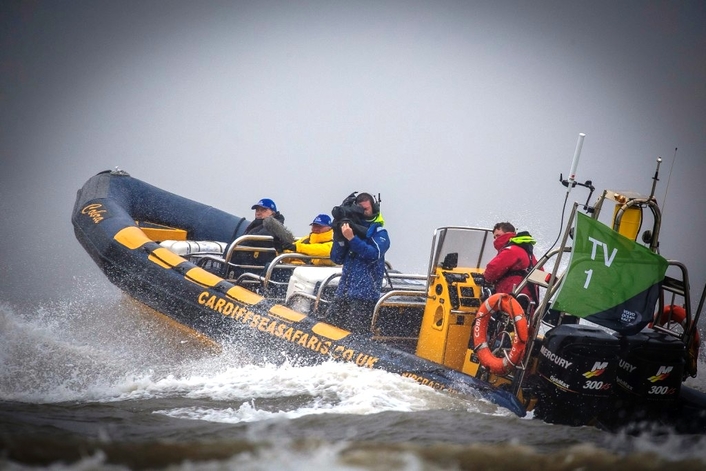 With the Vislink Clip-on 4 wireless camera transmitters positioned on the camera battery mount the camera remains nicely balance for the operator - allowing comfortable operation on what is a very full day’s job for the production team.
With the race day completed and the coverage of the boats leaving port for the last leg on their circumnavigation of the globe the equipment shows its portability and ruggedized pedigree as it is packed away and transported off to the final location for the grand finale and winner celebrations in The Hague.