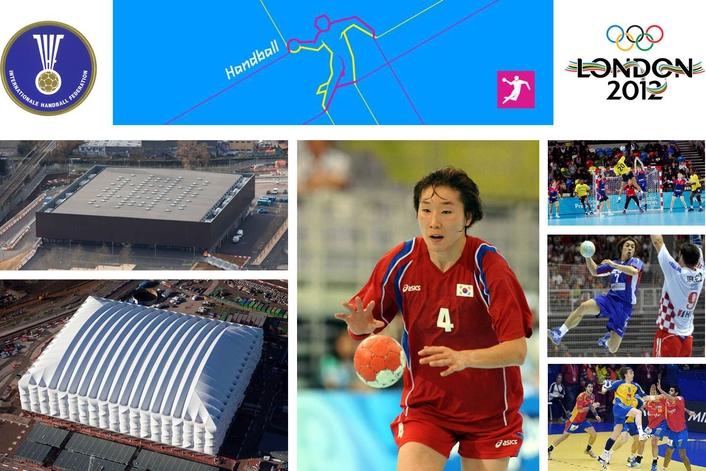 The London 2012 Handball Competitions will be held at the Copper Box and the Basketball Arena
Speed, skill and stamina are key attributes for competitors in modern Handball, a fast and exhilarating team sport. Handball offers plenty of physical contact and non-stop, end-to-end action. High scoring and a quicksilver pace will combine to make Handball a truly thrilling team sport and should draw big crowds throughout the competition at the London 2012 Olympic Games.

History
There are records of handball-like games in medieval France, and among the Inuit in Greenland, in the Middle Ages. By the 19th century, there existed similar games of håndbold from Denmark, házená in the Czech Republic, hádzaná in Slovakia, gandbol in Ukraine, torball in Germany, as well as versions in Uruguay.

The team handball game of today was formed by the end of the 19th century in northern Europe, primarily Denmark, Germany, Norway and Sweden. The first written set of team handball rules was published in 1906 by the Danish gym teacher, lieutenant and Olympic medalist Holger Nielsen from Ordrup grammar school north of Copenhagen. The modern set of rules was published on 29 October 1917 by Max Heiser, Karl Schelenz, and Erich Konigh from Germany. After 1919 these rules were improved by Karl Schelenz. The first international games were played under these rules, between Germany and Belgium for men in 1925 and between Germany and Austria for women in 1930. Therefore modern handball is generally seen as a game of German origins.

Originally played outdoors as field handball, the sport first appeared at the Olympic Games in 1936 in Berlin. Here the first field handball match took place in front of 100,000 spectators, despite being held in heavy rain. During the next several decades, indoor handball flourished and evolved in the Scandinavian countries. The modern indoor version made its Olympic debut at Munich 1972 for men and Montreal in 1976 for women.

The Basics
Handball is a high octane, physical contact sport that shares many of its main properties with football and basketball – only played much, much faster. 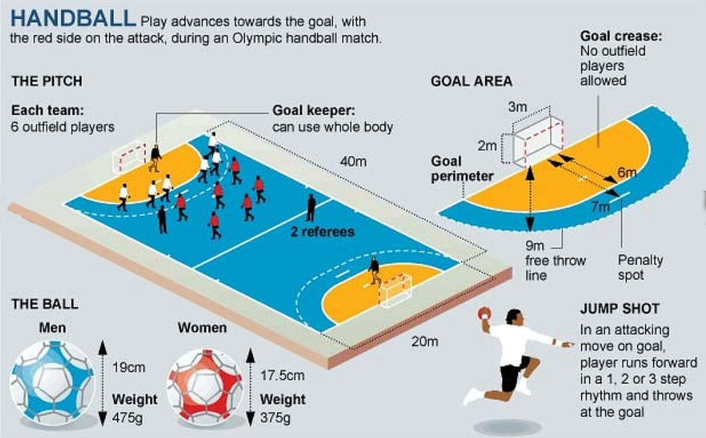 Teams of seven-a-side – six outfield players and a goalkeeper - play on indoor courts (40m by 20m) with the aim of moving the ball by hand between team-mates and hurling it in to a goal similar to those used in hockey. It’s not uncommon to see 50 goals in a single 60-minute match.

At London 2012, both the men’s and women’s Handball competitions will begin with a preliminary phase: the 12 teams in each event will be divided into two groups of six, and each team will play every other team in their group. The four best teams in each group will qualify for the knockout phase, with the winners of the semi-finals eventually going head-to-head for the gold.

The Format
Players pass or dribble, bouncing the ball as they run - with three steps permitted in between each bounce - to move upfield, though outfield players are barred from the semi-circle around each goal. 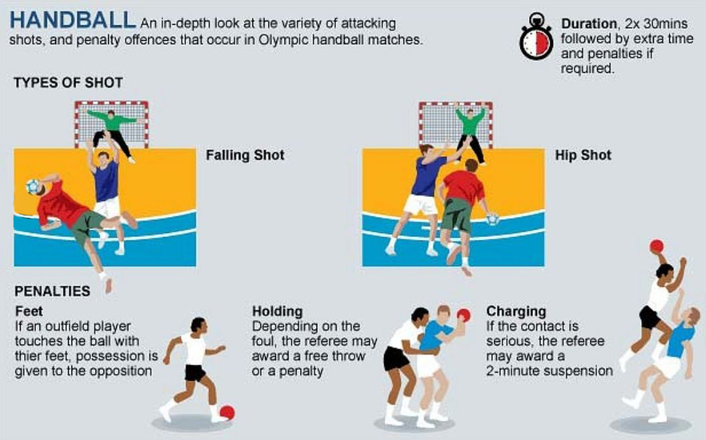 This leads to some spectacular shots at goal, as a player in mid-air is not deemed to have entered the area until he or she hits the ground. Players thus throw themselves forward into the semi-circle, only releasing the throw directly prior to impact.

A physical sport, defenders are allowed to block their opponents, with or without the ball, so long as they don’t use hands, arms or legs to do so.

Players can control the ball with any body part above the knee and are only allowed to stand still with the ball for three seconds, though opponents can’t deliberately grab or punch the ball out of another player’s hand.