History
The Repack Downhill race in San Francisco is generally considered to have been the first official mountain biking race. Much like BMX, Mountain Biking is a young sport that has risen to worldwide popularity at an amazing rate. Fast, furious and occasionally downright terrifying, the sport developed in northern California during the 1970s.

During the year of 1976, Charles Kelly and Gary Fisher, with Joe Breeze and Tom Ritchey, organized and steadily increased the amount of races that were held at the 3 mile long Cascade Fire Trail near Fairfax. Riders from all over the city soon joined the fun. Every rider would start at different intervals with one thing on their mind. They all wanted to own one of the 'Clunkers' and break the 2.9 mile dirt track record that had a vertical drop of over 1600 feet. They soon adopted the motto of Hell's Angels - "Ride to live and live to ride."

We believe that the continuous history of the mountain bike is most evident in Northern California. There are a few areas that will claim to be the first mountain bike community, but every history book will lead you to Marin County. The origins of mountain biking were totally innocent. It came into being not as some faddist vision of profit-oriented marketing types, but rather as the product of true cycling enthusiasts trying to find something new to do on two wheels. These cyclists found through fun and competition that the old one-speed klunkers they were using could be improved with modern cycling technology. One thing led to another and mountain biking “the sport” was born.

However, it quickly spread from its low-key beginnings and now has a huge following around the globe. The first official Mountain Bike World Championships were held as recently as 1990. A mere six years later, cross-country Mountain Biking made its Olympic debut in Atlanta.

The Basics
Cross-country Mountain Bike competitions at the Olympic Games take place over rough and hilly countryside. All riders start together and must complete a set number of laps of the course, with races lasting around one hour and forty-five minutes for both men and women. There are no heats: for both the men’s and women’s events, all competitors start together, and the first rider to cross the finish line wins the gold.

Bicycles used in Mountain Bike events are built for speed, durability and comfort, no easy task given the variety of terrain. They need to be quick and light enough to aid climbing through uneven terrain, but sturdy and stable enough to handle descents at extreme speeds. 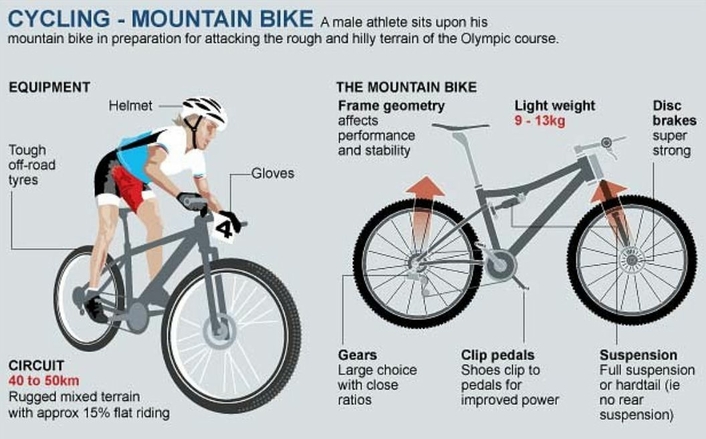 Mountain biking, by contrast, is very much a solo effort. Riders carry their own puncture repair kits and are expected to make changes themselves, although they are allowed to receive outside assistance should they suffer mechanical problems. It is possibly the only Olympic sport that incorporates fallen trees into the challenge. Races are around 40-50km long for men and 30-40km for women.

The Format
There are 50 places in the men’s competition and 30 in the women’s with places being allocated according to how nations stand in the UCI world rankings on May 2012. The top five nations in the men’s event are awarded five places, the next seven get two and the next 10, one. A top two finish at continental championships (excluding the European Championships) secures an additional Olympic birth. In the women’s event, a top eight finish in the UCI rankings secures two qualification spots and the next 10 countries gain one. While a first place finish in a continental championships in 2011 (again, not including Europe) will secure an additional place.

Construction of the Mountain Bike course at Hadleigh Farm was completed in March 2011. Hadleigh Farm in Essex was chosen because it fulfills requirements as a technically challenging course. The terrain is hilly with open grass land covered by low shrubbery. The site offers some fantastic gradients for mountain biking and great viewing opportunities for spectators. The course is set against the backdrop of the 700-year-old ruins of Hadleigh Castle.

Hadleigh Farm is owned by the Salvation Army. The venue covers a 550-acre site including beautiful grassland and woodland. It also includes the surrounding countryside of Hadleigh Castle Country Park.

In July 2011 the Hadleigh Farm Mountain Bike International took place as part of the London Prepares series.The event featured 82 athletes and allowed LOCOG to test key aspects of its operations ahead of London 2012.