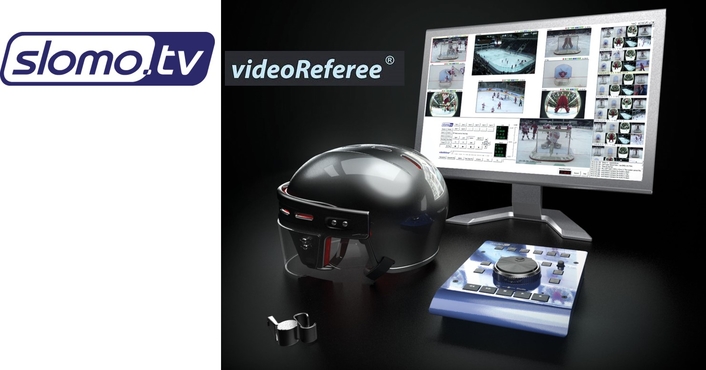 A decade ago, Slomo.tv, a leading international supplier of cost-effective, high performance server-based video recording and replay systems introduced its first 4-channel sports video judging system, videoReferee®, at the 2007 World Hockey Championship in Moscow. Working closely with Vladimir Mironov, the chief engineer of Moscow Krylatskoye Ice Arenas, slomo.tv developed the concept of a modern video judging system for ice hockey. Since then, several generations of slomo.tv videoReferee systems have been installed in more than fifty arenas throughout the world.

More than just goal confirmation
Listening to the requirements of the Ice Hockey referees, who wanted to keep track of not only goal-line incidents, but also a range of situations such as icing, offside and fouls the company in close cooperation with Continental Hockey League (KHL) added recording of panoramic cameras.

It turned out that when a panoramic camera records in standard definition the puck becomes invisible. At resolutions of 720 pixels across a 60m rink, the 8 cm puck accounts for just one pixel of the image. Therefore, it became necessary to add an HD SDI video input for Full HD panoramic camera. 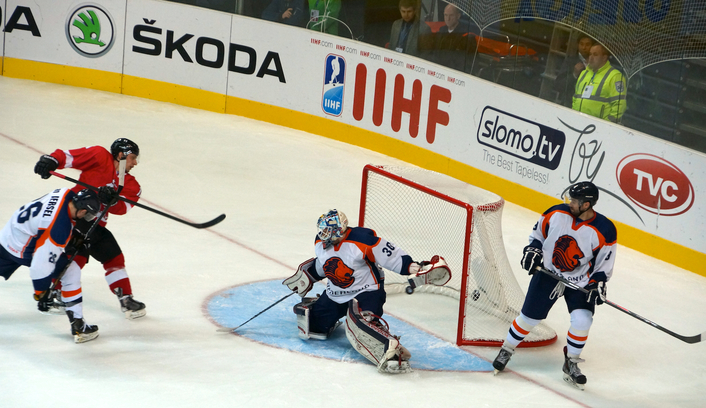 Another key innovation introduced by slomo.tv into its systems was interface with scoreboard match controllers. The game information (Time, Score, Penalty Time, etc.) received from scoreboard computer via a special interface is always synchronized with recorded video of all channels. Having full synchronization of video cameras with the scoreboard is very important because, in accordance with the rules, only goals before the time has been stopped are counted.  Currently, videoReferee® supports several dozen types of scoreboard controllers.

Multi-channel action recording – hockey evolves into soccer
Back in 2011, developing the VR-IIM2 model, slomo.tv engineers determined that for controlling situations over entire playing field, the server should be able to record up to 11 channels.  And forward-thinking hockey clubs that selected 11-channel videoReferee®-IIM2 have been rewarded by recent changes in KHL regulations. These clubs did not have to change or upgrade their servers – they could remotely upgrade the server software and its settings and very easily install two additional cameras.

Over recent years, the concept of the video refereeing has gained appeal in many sports and today it is a hot topic at the world’s most popular sport – soccer.  In July 2012, the International Football Association Board voted unanimously to amend the Laws of the Game to permit (but not require) goal-line technology. The technology was used at the 2014 FIFA World Cup.

In May 2016 slomo.tv’s 12 channel videoReferee® system was demonstrated by Broadcast Solutions GmbH at the FIFA workshop in Amsterdam, resulting of its acceptance by FIFA.

In September 2016, the Video Assistant Referee (VAR) systems, were first used in an international friendly between Italy and France for testing, with plans for implementation at the 2018 FIFA World Cup. 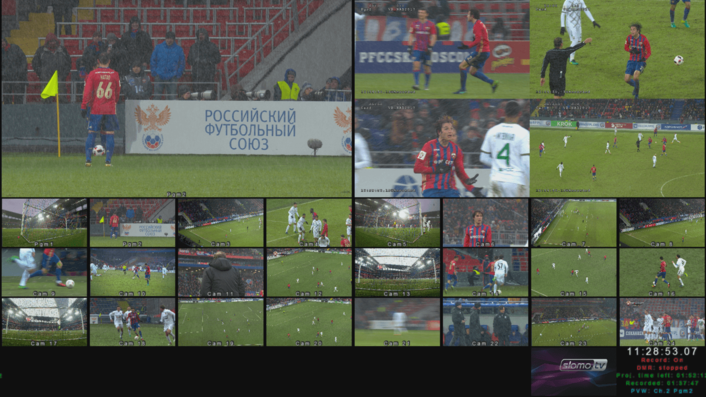 Video refereeing in football, unlike cricket or tennis does not allow appeals from participants.  Instead, match footage is constantly reviewed by a VAR, who alerts the on-field officials if they feel a reviewable error has been made. Only the referee can initiate a review, either on the VAR's recommendation, or if he feels a mistake has been made.

videoReferee-V – advanced features make stunning images
Slomo.tv is now testing the videoReferee®-V, the latest generation of its judging systems at football stadia in Russia where 2018 FIFA World Cup will take place next year. The new system pushes back the boundaries and creates a new standard in multi-channel video referring since it can record up to 24 HD/3G channels. This means that now, any competition can be "covered" by one server. 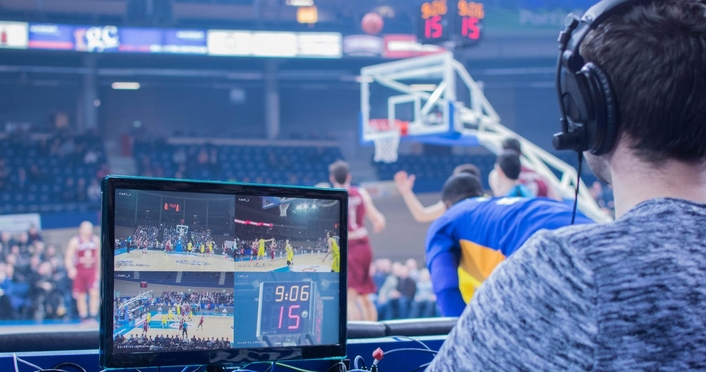 To display so many channels requires monitors with more than 1920x1080 resolution. Now these screens can have resolution of up to 4K, which provide detailed images of all 24 channels. Since the system can work with 3G signals, when investigating disputed incidents, the images are twice as sharp as they are when working with HD signals. Another noticeable feature of this system is its ability to work with 720p, HD and 3G signals on a single project.

VideoReferee®-V also has an SDI output option for providing, if necessary, the output from the referee's monitor to broadcasters. The system records 24 cameras. The referees can analyze incidents frame by frame concurrently from several camera angles. The video image can also be zoomed in to scrutinize the action in the finest detail. Events can be marked live or on recorded video and they are instantly available for review.

When an event is created, the system remembers the currently active channel, and when returning to this event, it starts with the same view. Marked events are also used to create video reports with highlights of the game’s most controversial moments. 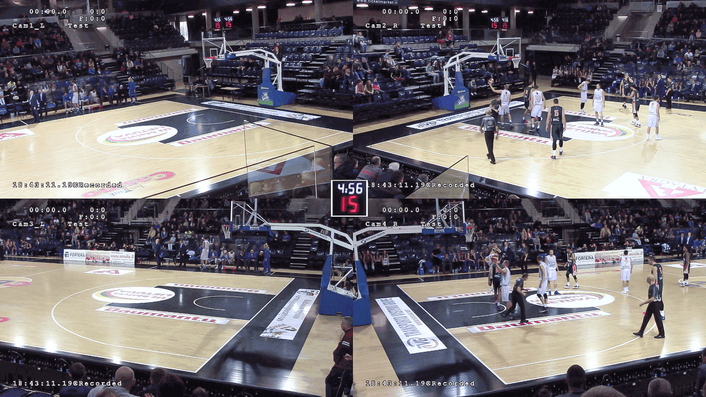 Using the vR-Keypad, the operator or assistant can assign with a single click different event tags.  The system’s search engine enables the operator to instantly find tagged events.

The standard videoReferee®-V configuration includes two monitors – engineering interface monitor with built-in multiviewer of all channels and folder of marked events and referee's monitor with controller for the video judge. The video judge can work with 1, 2, 3 or 4 cameras simultaneously in live or search mode. That helps in accurate and quick decision making. Users are able to create different presets of channels. The system can also magnify any frame for detailed analysis.

Besides the referee's and engineering monitors, videoReferee®-V can accommodate a third monitor working as a separate multiviewer. This is useful for a video-assistant who can mark events on live video when the referee's monitor is used for analyzing in-play incidents.

In the case of limited space and/or personnel, all these three interfaces can be displayed on a single monitor using the system’s MultiSkin function. 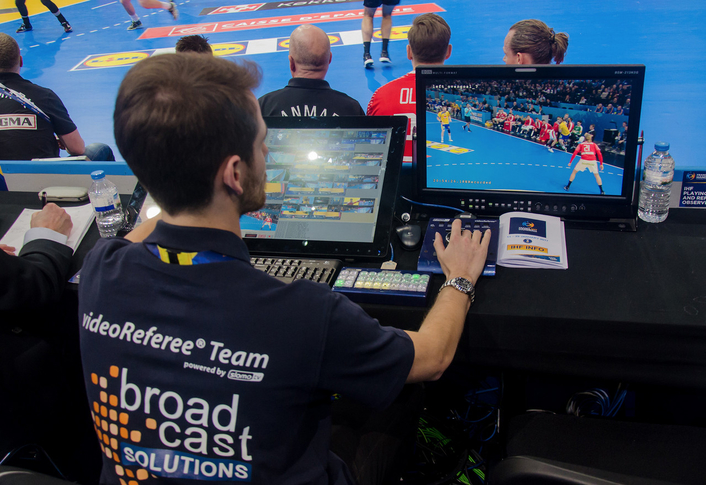 All these new capabilities and features make the new system a champion in sports video judging. “However, we are not stopping here” - said Igor Vitiorets , the CTO of slomo.tv.  “Yes, soccer is our priority today, just as Ice Hockey was a few years ago, but we are also successful in other sports, such as Handball, Basketball and Canoe Slalom.

“Our system videoReferee®-IIM3 was used for judging the Canoe competitions at the Olympic Games 2016 in Rio. We are constantly learning from our partners and customer,” added Igor Vitiorets.

During most competitions where video-assisted judging is used the system is usually connected to the arena scoreboard controller for receiving the relevant data (time, period, score, etc.). Quite often there are situations when, for some reason, such direct connection cannot be established but it is critical for synchronizing scoreboard timing and video.  A typical example is judging the validity of a throw in basketball at the end-of-shot clock. Only if the throw was made before the end of this time-slot is it valid.

For systems with a limited number of channels (videoReferee -B, -Jr. or -SR) there is a special Scoreboard Camera Option, providing an additional external input channel via the USB interface. Any camera with SDI or HDMI output or even consumer camcorders can be used to capture the scoreboard.

“Technology of video refereeing as is still evolving,” concluded Igor Vitiorets. “And we are proud to have been at the very roots of it. But it is not just the technology or importance of sales: we are passionate about “fair play” in sports and want everyone to have this opportunity. That is why we are looking at rental and leasing business models offering affordable videoReferee® solutions to all our potential customers, no matter how big or small they are.  According to IABM research, today the service/rental business model overtakes system sales and we can learn from this.”