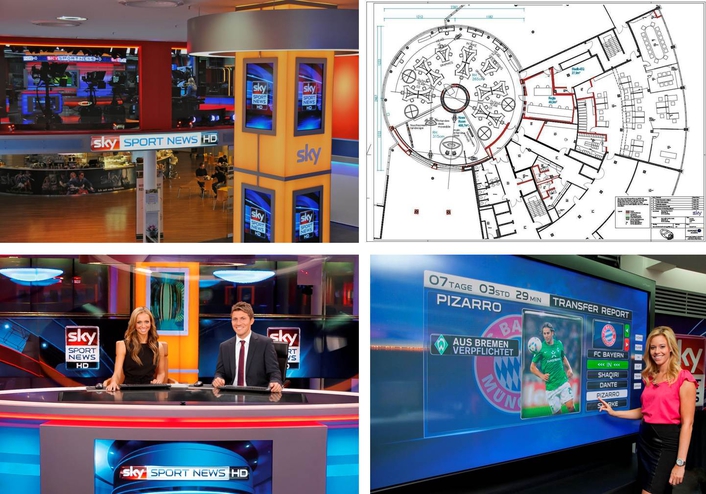 Sky Sports News 24 is on air from 06:00 to 01:00 seven days a week, with commercial breaks at half hour intervals
Sky Deutschland has added the popular Sky Sports News 24 channel to its extensive line-up. More than three million subscribers across the Sky Deutschland region in Germany, Austria and Switzerland can now tune in to the dedicated sports channel for 19 hours a day.

“Every day is different,” explains Francesco Donato, VP of Broadcast Operations of Sky Deutschland. “The programmes range across all sports – there are no limitations, so viewers have a huge choice regardless of their sporting taste and can see 19 hours of daily action.” 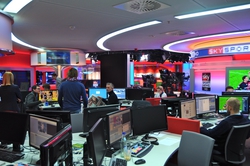 The Sky Sports News 24 channel originated from a purpose-built studio and newsroom in Munich. The current set-up, which combines the newsroom and studio into one single area, is equipped with an extensive range of the latest technology. The equipment includes a comprehensive automation system incorporating robotic cameras from Vinten Radamec.

Donato adds, “The space is circular and uses a hot desks concept for the 70-strong team of journalists. The studio area takes up a large portion of this, so one of our key requirements was to create a studio space that is versatile and flexible to cope with the channel’s changing demands.”

The needs of the studio vary from segment to segment, whether the requirement is for two presenters or for a slot where there is the need for a large discussion group. The look of the studio can also be transformed if an item demands dedicated branding. For example, Sky recently got the rights to broadcast Formula 1 motor racing, and when Sky Sports News  covers the subject the studio has the capability to adapt  its  look, as well as the graphics, maintaining the channel’s style, to match that specific sporting event.

The solution to cope with the channel’s varying requirements was to create a relatively large studio area with good blanket lighting. To maintain a comfortable working environment for the rest of the room it uses LED lighting from renowned Vitec Videocom brand, Litepanels. Litepanels’ energy saving products use little power and allow the studio to run cool.

The flexibility is created by moving the cameras around the space, giving a variety of looks from the different areas and allowing the presentation to move from solo presenters to larger groups. The economics of the channel dictate that a high level of automation is required to minimise the staff dedicated to operations, which is one of the key reasons that Sky selected Vinten Radamec’s cost efficient studio robotics.

The installation at Sky Sports in Germany incorporates six Sony cameras on Vinten Radamec Fusion FP-188 robotic pedestals. The FP-188 pedestal’s innovative mechanics provide both smooth movement across the floor and perfectly balanced elevation, ensuring that the HD pictures are perfect quality. With a payload of 85kg, Vinten Radamec’s FP-188 has been designed to comfortably support and elevate a studio camera with lens, prompter and confidence monitor if required.

Sky Sports News pairs the FP-188 pedestal with the Vinten Radamec Fusion FH-100 pan and tilt head. A combination that is capable of being operated manually should production requirements demand it, but at Sky the intention is to operate it in automatic mode.

The pedestal uses an unobtrusive L-shaped mark on the studio floor. It runs over this mark to establish its reference position, and then uses its precision wheels and motors to maintain positional accuracy anywhere around the studio floor.

A Vinten Radamec HD-VRC control system has also been installed alongside the robotic pedestals. As a standalone device this allows a large number of camera orientations and positions to be pre-set, which can be recalled from a touchscreen controller. Logic within the HDVRC, coupled with collision detection built into the pedestals, ensures that a diverse system such as Sky, which has six moving cameras in a relatively confined area, can operate safely and deliver smooth movement even on shot.

The open interconnectivity of the Vinten Radamec HDVRC means that it can also manage third-party robotic cameras. The Sky Sports studio has two Telemetrics pan and tilt cameras, which are controlled with the same functionality by the HD-VRC.

The mobility of the cameras is central to the dynamic production style of the output. “The cameras move around a lot, and movements of cameras are part of the show’s format,” says Donato. “The presenter frequently stands in front of a huge touchscreen display to set up the coming segment, then the cameras follow as the presenter moves into the discussion.”

While the camera robotics can be operated from the HDVRC control surface, for normal operations at Sky Sports News the HDVRC, like the rest of the operation, is handled by Mosart production automation. Based on a set of user-defined templates it controls all of the technical operations in the production.

“Every single action in the programme comes from a template – graphics, video and audio switching, as well as the camera moves and positions,” says Sky’s Donato. “If we need to create a new style, like we did for the Formula 1 segment, then we have to go through a process called ‘show design’ to create new templates, or modify the existing ones.

“It means that we can broadcast complex shows all day with just three people in the gallery. We have two control room operators – one handling the current segment, the other preparing for the next, or doing support for a complex live situation – and a journalist, who also has extra skills to understand the way the show flows. It works very well and there is no need for a director or other technical operators.” 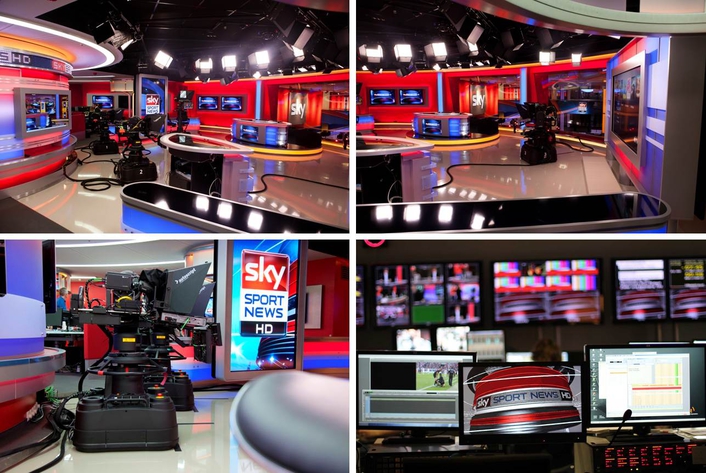 The result of such an effective studio set up is one of the most productive broadcast operations in the world, transmitting multiple hours of popular live television seven days a week. The slick technical operation means that Sky Sports News can devote as much of its budget as possible on perfecting it wide ranging content, with a large team of journalists working to keep sports fans up to date.

“Launching a new channel is always an exciting challenge, and the pressures to get on air mean that we have to select our technology from vendors we can trust. Camera robotics was always going to be central to the success of this operation. Our first choice in terms of equipment was for technology that would deliver the quality our viewers demand.”

Donato used Vinten Radamec equipment during an earlier project, when he was tasked with a new installation for Sky Italia. He concluded: “My past experience dealing with Vinten Radamec gave me the confidence to specify it for this new project, and the level of automation we have achieved has met all our business and operational goals.”