Until recently, WebStream Sports was an independent provider of remote broadcast, in-venue and studio production. Starting out in 2006, the Indianapolis-based business had focused primarily on live sports, spent nearly a decade in high demand for its reputation for high-quality sports productions, and achieved remarkable success in a relatively short time.

Fast forward to 2015. Part of a much – much – larger company, suddenly its “little engine that could” beginnings were behind it, and the stakes for growth in a high-profile organization were greater than ever.

That meant the production technology it chose needed to deliver reliably – and affordably, even at scale.

“We move at one speed, and that is fast.”

That’s what founding CEO John Servizzi says, looking back at the 16 months since his broadcast production services company was acquired. 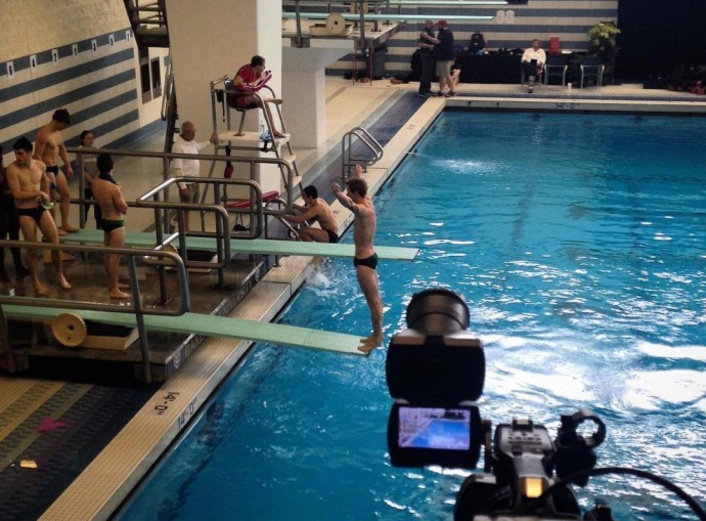 The acquisition took place in September of 2015. His company, WebStream Sports, was a 35-person organization operating 5 production trucks primarily in live sports; the new owner, Raycom Media, is a 4,600-person television group operating 63 television stations across the US.

Even so, his operators didn’t even blink. “They just ran with it,” says Servizzi.

After all – unlike in 2006, when it started out as a five-person, three-camera streaming producer of games in the NCAA and Horizon League – by 2015, WebStream Sports had already mastered handling a thousand productions per year. 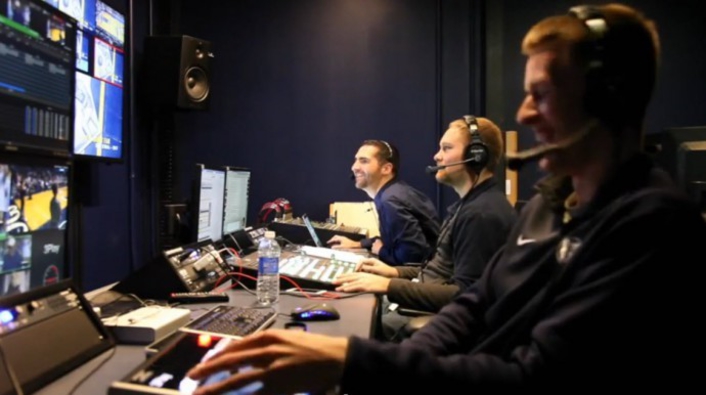 Over the same period, it had grown into producing national television programming across broadcast channels like ESPN, pushing the limits of its video gear with every opportunity.

“To sustain growth, we just couldn’t keep doing the same thing all the time. The needs of the show are always pushing us ahead,” says Servizzi. Technology continued to advance, production needs multiplied, equipment capabilities increased — and the possibilities for bringing more dynamic production elements into a show have grown all along the way.

“In the time since we started, for instance, use of POV cameras has increased dramatically,” he says, and this happens almost organically, with ideas coming throughout the flow of a production.

“Getting a camera into your system is really almost an afterthought now. It’s not a situation where you’ve got to make a $10,000 investment to get broadcast quality video into a switcher. In some cases, you’ve got a couple-hundred-dollar GoPro, or a Marshall POV camera.”

To be flexible enough and ready for these moments at any time, the switching equipment used in a production has to scale, too. And that’s the dilemma faced by just about every live producer. 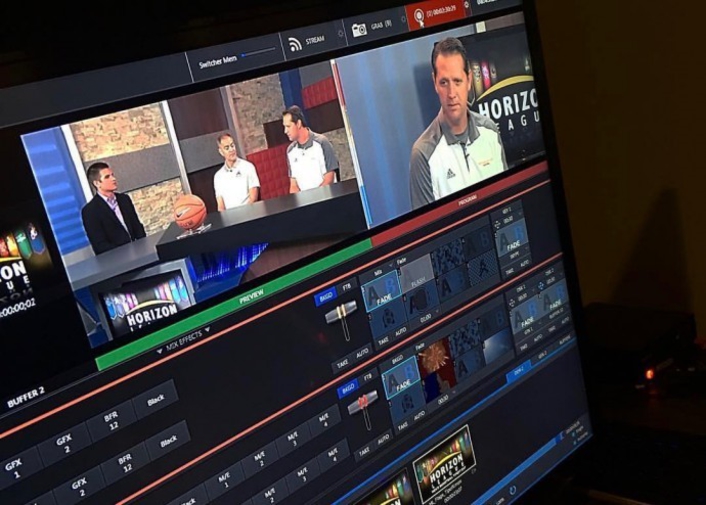 “It’s one of those things: there are never enough inputs. It almost became a joke,” Servizzi says of his successively more demanding video-switcher purchases over the years, after starting out small in 2006 with one of the original NewTek TriCaster® PRO multi-camera production systems.

“With our first TriCaster, I had three inputs and then I wanted four. Then I had four [with the TriCaster 450] and I wanted six. They gave me eight [in the TriCaster 850] and when I got the 8000 they said ‘I suppose next you want 16, right?’”

Sixteen inputs might have seemed excessive for their typical productions at the time. But in January 2017 WebStream joined forces with Tupelo-Honey, another Raycom property, to become Tupelo Raycom.

Suddenly, as executive VP of the group’s full-service live and digital production division, Servizzi found himself needing to outfit a sixth truck; this time, with equipment that could scale to keep up with some of the highest-profile clients, production partners and corporate events produced today. 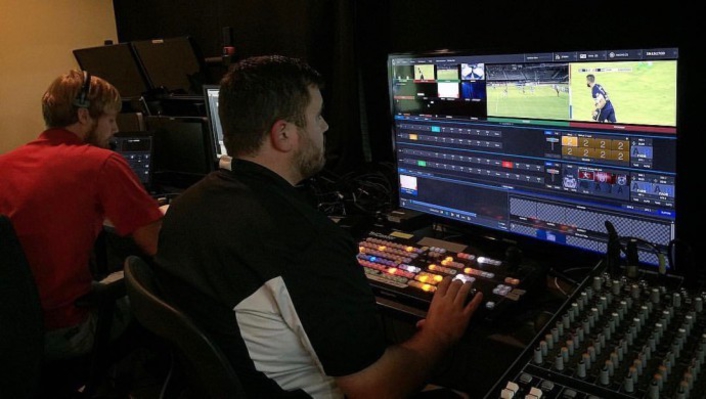 Fitting into the Ecosystem

There are lots of conventional broadcast switchers in the market that can switch 16 inputs. For Servizzi and his team, who had built a business on solving production constraints with highly resourceful solutions, that wasn’t the main issue.

“Any company can produce a show with an unlimited budget. That’s easy,” he says. “There’s not much challenge in taking a massive budget and executing even the grandest of visions. When you get to the end of the show and the client says ‘You know, I really couldn’t tell the difference there’ and you’ve saved them 25%, that’s a huge win. You’re going to have a lot of work when you can do that consistently.”

And that’s one of the advantages WebStream Sports had realized for itself and its clients over the years using NewTek multi-camera production systems. In fact, he standardized his first five trucks on TriCaster because of its integration of multiple production components into one cost-effective solution.

“It’s the amount of playback channels built into one solution,” Servizzi says. “It’s the number of different outputs that you can generate with different graphics to serve different audiences, or to serve different destinations within your IMAG show or whatever the case may be. In my experience, that’s where NewTek still wins from a value proposition. The performance – your cost-to-performance metrics – are definitely in NewTek’s favor.” 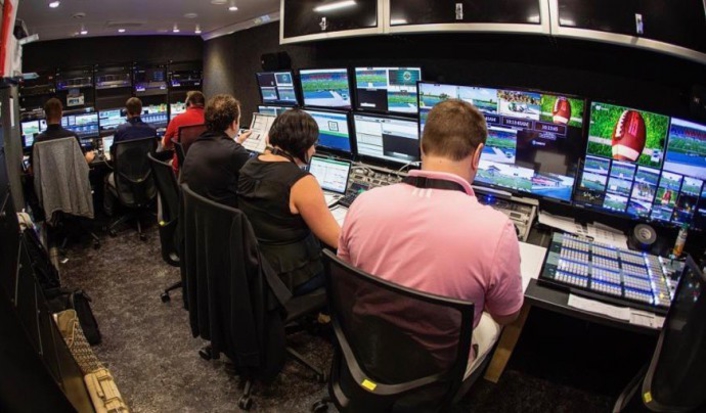 So when the company started talking about building the new truck for productions of a much higher scale than 8 or even 12 inputs – taking them down a path that didn’t lead to another TriCaster – his big concern was finding something else that would fit seamlessly into the successful production model he had already built.

Says Servizzi, “We use full-time staff. We don’t have freelancers in those positions. It’s a situation where if I introduce a completely new switcher architecture, all of my staff has to now learn two things. We’ve got five trucks on the road at any point that are using different models of TriCaster – depending on the production – but the way of working is pretty much the same.”

And that consistency matters for their clients. “If there’s a million people watching a big show on ESPN, that’s great. If there’s 13 people watching on a webcast, mostly family, and friends, we still owe the athletes on the field the same level of respect and effort. That’s really the guiding principle that’s gotten us to this point.”

He started thinking about the considerations for keeping a new truck on the road in constant, productive use. How would he be able to train people? How could they seamlessly transition from one truck or production to another?

In other words – he wondered – “How am I going to do all of the things that I want to do coming from a TriCaster world and make money on this thing?”

That’s when he figured he really was stuck in a rough spot because he thought there was just one answer – one that didn’t exist. “I needed a TriCaster with more inputs.” 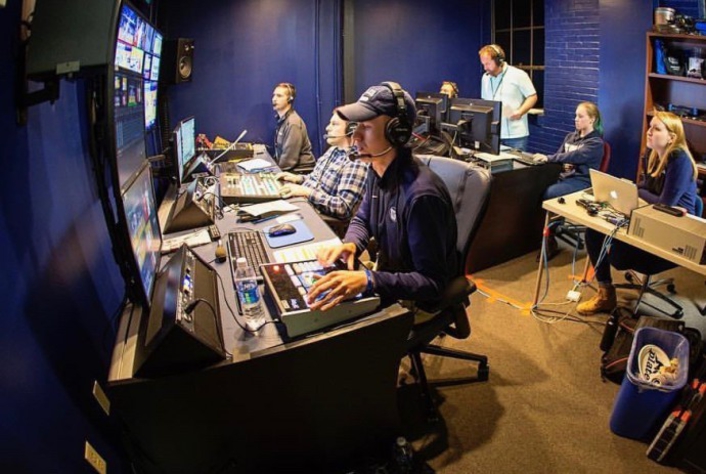 When NewTek representatives met with pre-merger WebStream to discuss the new truck, Servizzi says he walked into the demo room fully expecting to see a TriCaster with 16 inputs. He’d seen the original TriCaster models progress from three to four inputs, and then it seemed the progression was going to double each time.

Instead, they showed him the NewTek IP Series Video Mix Engine (VMC1), a modular live production system for switching frame-accurate, hybrid SDI and IP video, even over a network.

It’s built to scale higher than TriCaster can – largely due to IP capabilities using the NDI video protocol, also innovated by NewTek – but its interface, and access to the dozens of built-in production components are based on the same live-production software that NewTek uses in its TriCaster models.

This meant the learning curve would be virtually nonexistent for the current crew, which overcame a huge hurdle for Servizzi. Seeing that, he said, “I didn’t need convincing that software could handle the job.”

He did need some convincing, however, that the IP-based signals were going to hold up. “Not only to the naked eye but for the engineers.”

So he put the IP signals to the test too – repeatedly. “The reality is that you start passing video through and you start producing, and you’re just not seeing any difference in that resulting signal. You put it on a production grade monitor. You put it on the biggest monitor you have and it just looks the same. It looks like it’s supposed to look.”

To him, he says, “That was the biggest victory, that it was just right. There wasn’t a compromise in what was going to come out the other end of that system.”

With two of his biggest concerns, quality and operation, eliminated, the third one, scale, was the final one to overcome: The system would need to hit his I/O requirements or he couldn’t even begin to consider it for outfitting the new truck.

The IP Series Video Mix Engine can take in any NDI-enabled video source over standard Ethernet networks, in addition to traditional SDI video connectivity. Further, each optional IP Series Studio Input Module (a breakout SDI I/O box) can bring in 4x remote SDI sources. All told, with up to 44 inputs, the IP Series scalability far exceeded the 16 inputs Servizzi had been thinking going in. He says:

“The answer to my question about inputs was essentially, ‘it’s unlimited.’ That’s the point when I sat back and thought, ‘Okay, this is a paradigm shifter. This is going to be a little bit more disruptive than I was expecting.’” 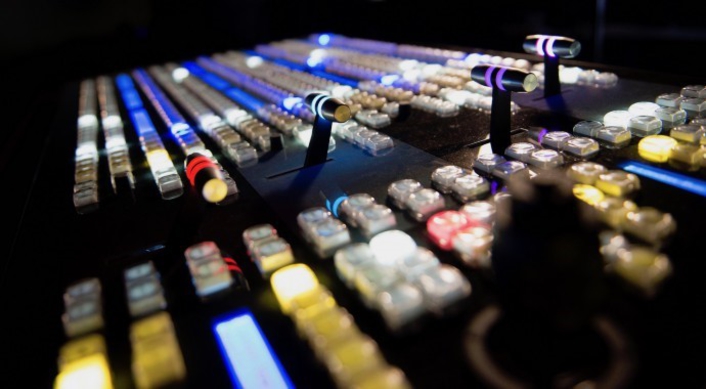 With all the industry talk about how IP video will completely change production – and all the worry and hesitation many companies have about how disruptive it will be for their current processes – Servizzi sees quite a different result in practice.

“I know this is supposed to completely alter the world of production—but our workflow hasn’t changed. What we got as a result of IP integration, in all honesty, is more inputs. When you’re on the truck side of production like we are, you still have to put cameras in the venue. You still have to get those cameras back to the truck.”

It’s that lack of workflow disruption that won him over. “That’s really the benefit to us, so far – the fact that it’s the same. It’s like the TriCaster that we were used to, in a stronger, more versatile form factor. In very direct ways it enables us to do shows that we weren’t always able to get before. We can go in with a modest budget and execute a large show. That’s important.”

As for his operators, he says, “They look at which truck they’re scheduled on now. When schedules go out, everybody’s hoping that they’re going to be in the big truck because they want to use the new machine.”

In the end, he’s pleased he could continue with his company’s standardized NewTek software workflow.

“This is as good as NewTek’s been on day one of a new product. It really is,” says Servizzi, “and that’s comforting. That makes me feel really good about the investment that we’ve made.” 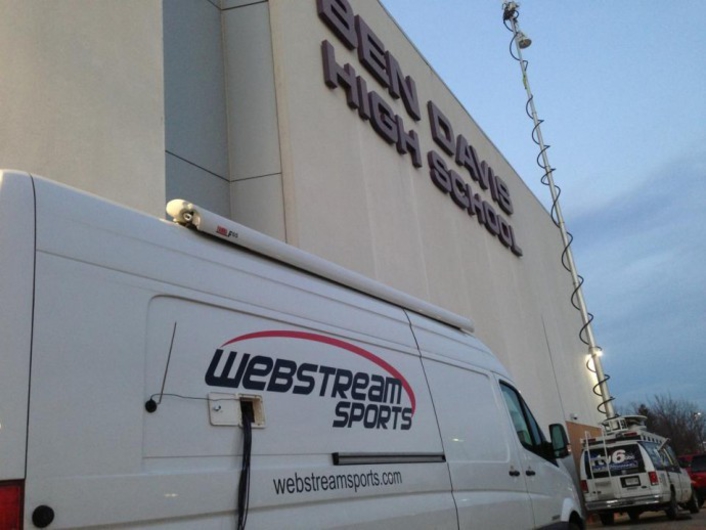