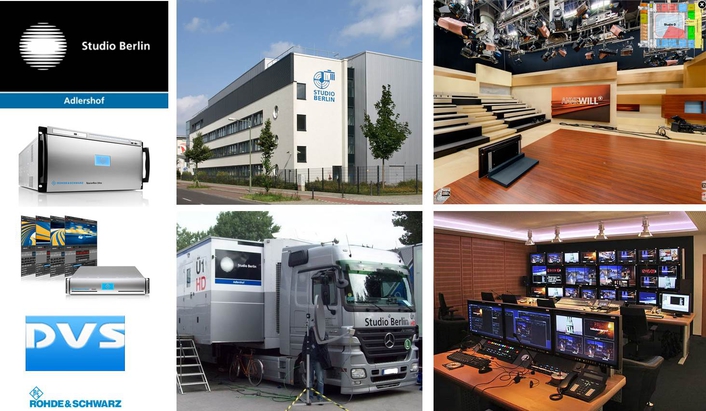 Studio Berlin, founded in the early 1950s, has several subsidiaries and sister companies, e.g.
Studio Hamburg and Pinewood Studio Berlin that was founded in 1998 as a subsidiary from Studio Hamburg. Offering highest technical standards in its production environment, working on large entertainment or theme shows, TV series, magazine formats or international cinema, the company is involved at every step: from script development, planning, to implementing the full-service location, production, post production and delivery. Studio Berlin is well-known for its productions like “Günther Jauch”, “Voice of Germany”, “Let’s Dance”, “Anne Will”, “hart aber fair” or its award-winning movie “Good Bye! Lenin”.

At a glance
Studio Berlin placed vital Rohde & Schwarz DVS technology at the core of its production system and main control room. In order to produce major German TV shows like “The Voice of Germany” to a five million audience, the Rohde & Schwarz DVS systems are responsible
for the complete production cycle: 12 channels of R&S®VENICE provide smooth ingest
and playout along with transfer and transform operations for delivery.

The R&S®SpycerBox ensures reliable online storage for the implemented VENICE systems. This grants Studio Berlin another competitive advantage over other service providers since their trained staff can easily move between different setups and scenarios that VENICE offers.

Studio Berlin benefits from the flexibility of the implemented systems and is able to react to the German broadcasters’ demands with ease: state-of-the-art technology from Rohde & Schwarz DVS allows them to produce codec- and format-independent, adapting their production environment according to customer requirements. 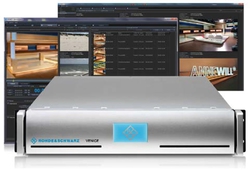 1.) The main installation counts three VENICE systems plus a SpycerBox for the main HD control room
2.) The second installation, including one VENICE, is on remote location
3.) For the secondary HD control room another two units of VENICE were integrated

“To handle the rapidly growing amount of data and the great number of different file formats and codecs, represents a major challenge for our file-based workflows. The Rohde & Schwarz DVS systems are the perfect solution: high-performance and reliability, a huge range of features and functions and easy to use for our operators.” Ralf Helbing, Head of IT at Studio Berlin

Challenge
Being an independent full service TV provider, Studio Berlin is commissioned by diverse contractors with varying requirements: a multitude of incoming formats and an abundance of codecs and playout formats as well as diverse delivery requests.

Producing an impressive number of different shows, usually equipment has to be rented or bought to meet these complex demands. This leads to slow and cost-intensive workflows, which can be difficult when you have to comply with pre-defined specifications and deadlines

Therefore, Studio Berlin was looking for a system that would allow them to react flexibly on the number of formats, codecs and workflows they were faced with – deriving from and to be delivered to several editing stations, cameras or other media. Their goal was to implement a system that would effortlessly switch from project to project and that would handle all involved ingest and playout formats with ease.

On top of that, transcoding capabilities and connectivity to editing environments were demanded, too.The complete package had to speed up their workflows considerably while allowing for a decisive competitive advantage. 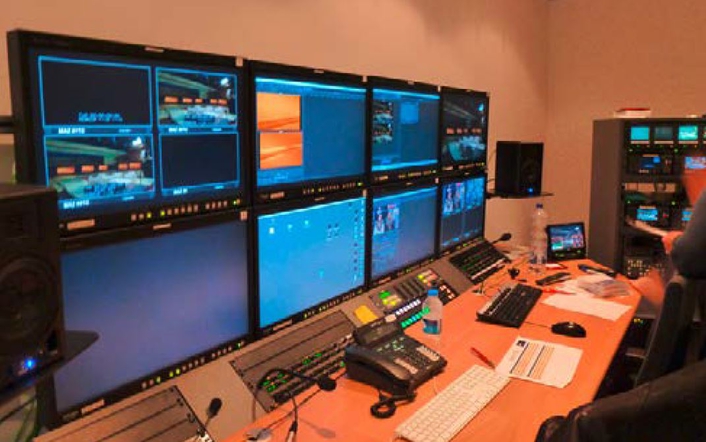 Solution
The product portfolio from Rohde & Schwarz DVS offered the ideal solution. With the integration of twelve VENICE channels and a SpycerBox several German shows are being produced, e.g. “Anne Will” or “hart aber fair”. In a separate installation, another VENICE is being used for “Günther Jauch” – all of them major German TV shows.

With VENICE, Studio Berlin implemented a system that proved itself to be so much more than a classical video server.

The three VENICE systems with their 12 channels effortlessly handle the multitude of incoming signals and codecs and play them out in any required format as well. Furthermore, the VENICE systems, being the core of the production workflow, became Studio Berlin’s true time savers and smart media production hubs: No additional software is required, since VENICE includes ingest control, diverse control mechanisms and allows for different  scenarios. Even material for last-minute changes, e.g. during live shows, are managed smoothly, since VENICE does not need to run complicated conversion processes. The delivery is carried out extremely.

The VENICE systems displayed all their layers of functionalities and their all-in-box-concept: along with their ingest and playout capabilities, the transfer and transform categories were fulfilled in the control room. Their open system architecture allows fast and uncomplicated data exchange.

Workflow example
Studio Berlin used the VENICE GUI right from the start, abandoning the idea of installing a separate external controller. The VENICE GUI proved to be very fast, and intuitively – no additional cabling and investment became necessary. Studio Berlin benefits from VENICE’s GUI when running back-to-back playout, compositing playlists or while ingesting program or isolated cameras – then even using direct streaming and physically seeing the ingest signal in the overlay without needing to install an external multiviewer in the VTR room. SpycerBox with its open storage architecture fits seamlessly into Studio Berlin’s environment. Especially SpycerBox’s high performance levels were an additional plus in Berlin. It fulfills two major requirements at the same time: On the one hand, the SpycerBox is implemented as VENICE’s realtime storage via Fibre Channel. 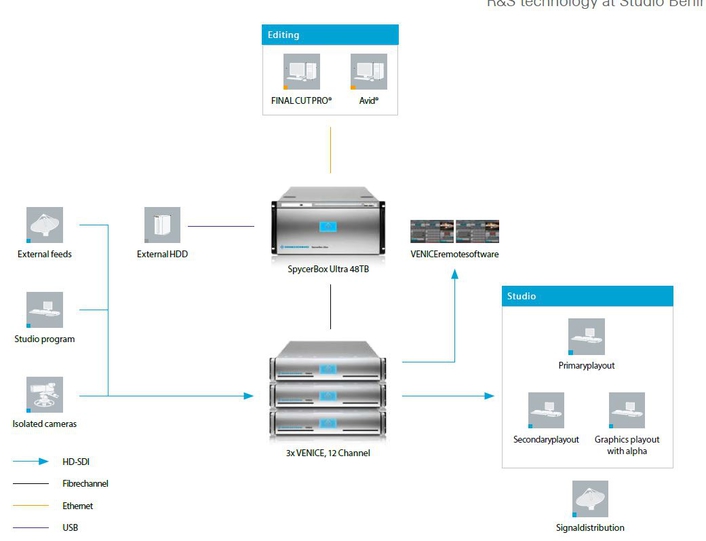 On the other hand, thanks to its NAS configuration, SpycerBox connects to separate editing environments granting operators direct transfer options, abandoning the formerly required network of runners or tapes. It allows for fast data exchange between production and editing, e.g. with Avid® or FCP systems. Operators at Studio Berlin especially valued the reliable storage’s ability to conveniently distribute data across the entire network with ease. Again, this led to smooth, connected processes.

The main benefit of VENICE is its flexibility: any setup can easily be adapted to another production scenario. Studio Berlin’s environment is versatile in the following aspects: adjustable workflows that allow to rapidly adapt to changing surroundings and conditions. VENICE enables Studio Berlin to produce a show one day, then, on the next day, to completely switch to another production scenario.

At the German political talk show “Anne Will” eight channels are applied for ingest: record of the master signal and the isolated cameras with XDCAM HD 422®. For primary and secondary playout, four channels are used. All establishing shots are bundled in one playlist.

When running secondary playout to screens on set with additional material, VENICE’s channel grouping feature became vital at “Anne Will”. VENICE enabled multi-monitor playout of background animations over several connected screens – being one of the visual key elements of the talk show.

Due to post production setup for “The Voice of Germany” huge editing suites were connected to the Rohde & Schwarz DVS systems. They proved to be the newly established production environment’s vital artery: The data was effortlessly fed and used for playout during the show. Thus no additional gateway architecture was needed. Instead, connected processes were established. The producers of the show were especially happy with VENICE’s proxy abilities: Right after the show all 12 camera signals could be delivered as proxy files, including the respective timecodes. 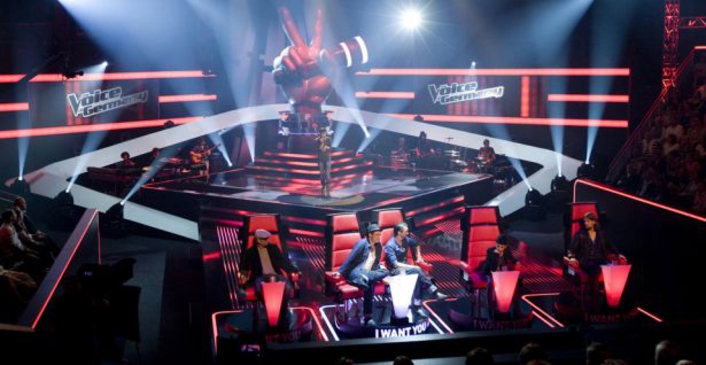 This feature allowed for a complete overview and production clarity: VENICE includes the possibility to generate a proxy file during ingesting. This can be either carried out in a while-scenario, i.e. parallel to ingesting or after the actual event, including burn-in timecodes. These connected workflows sum up what broadcasting is all about at Studio Berlin: saving time and money. Giving staff the creative freedom to make a TV show feel special and extraordinary – instead of keeping them busy with administrative jobs that are unnecessary when just a few clicks on a system can handle that. With the integration of the VENICE systems along with the SpycerBox Studio Berlin gained exactly what they were looking for: speed and flexibility in their daily production environment.