More than 100 HD remote cameras are installed on site: Aerial view of the Utopia hangars and stables with grazing ground
A new reality format is breaking all the records in the Netherlands: “Utopia” is a hit with both TV and Internet audiences. Devised by John de Mol and produced by Talpa, “Utopia” has invited 15 inhabitants to leave their usual lives behind for a full year to create an ideal mini-society of their own in Blaricum, near Hilversum. Multimedia company Dutchview was faced with the big challenge of covering a 12,500 square metre area with both video and audio recording equipment to follow the Utopia inhabitants. In order to provide coverage to this vast area with an RF wireless solution, they turned to Sennheiser Benelux for assistance.

Since the start of Utopia on 6 January, the people of the Netherlands have been watching in droves to discover whether the 15 inhabitants will manage to create the life of their dreams – or whether their ambitious project will turn into a nightmare. The launch broadcast attained a TV audience share of over 25%. The Talpa production is also a success on the Internet: a total of 188 million video streams have been viewed, the official webpage has registered over 4 million unique visitors, generating a record of 350 million pageviews to date, and the Utopia app was downloaded 110,000 times in the week of the launch alone.

The site challenge
What looks so effortless now on the screen required a lot of careful planning and dedicated work by the Dutchview team. Peter Slot, Dutchview project manager, explains: “We have a lot of experience in reality formats but the challenge of covering 1.25 hectare in an open field surrounded by a lot of trees was completely new! We ended up installing more than 100 HD remote cameras on site. We had to mount them upside down to get a good viewing angle but this also meant that we needed to give them a new housing as rain could get into the cameras now. We also devised a modified remote control for the cameras to enable us to get the pictures we need.”

Capturing the audio was an equally big challenge: “Not only would the sheer size of the area make RF coverage difficult but we also had to take into account that humidity and the changing weather conditions in general would affect the RF. We therefore contacted our partner Sennheiser Benelux for advice.”

Wireless audio
Vincent Tilgenkamp, Sennheiser Benelux’s RF specialist, got involved. He and his team visited the site to carry out detailed measurements and check optimum antenna positions for capturing the wireless audio. He noted, “Never before has such a large area for a reality format been covered by radio mics, and we had to come up with a few special solutions to do the trick.”

The 1.25 ha Utopia location accommodates two spacious hangars for housing, a stable for cows and hens, grazing ground and some agricultural land – plus woods in between. To capture the conversations of the 15 inhabitants, they would have to be miked with bodypack transmitters and clip-on mics.

After the on-site visit, Vincent Tilgenkamp and his team were already able to rule out some options: “Dutchview had planned a fibre distribution network for the cameras, and we briefly thought about distributing the RF signals via fibre optic cables too but then discarded this idea. The distances involved were at maximum 335 metres from antenna to microphone receiver, and we calculated that a coaxial distribution would result in a better performance.”

They also considered the option of tripling the receiver racks for the three main areas of the premises: the housing hangars, the stables with grazing land and the agricultural land. “Distributing audio instead of RF is easy to do – this just requires standard audio products. But if inhabitants moved from one main area into the other or were moving at the boundary between two areas, we would have encountered challenges in the mixing and switching between the audio sources, with different antenna and receiver combos picking up the participants’ signals,” explained Tilgenkamp. 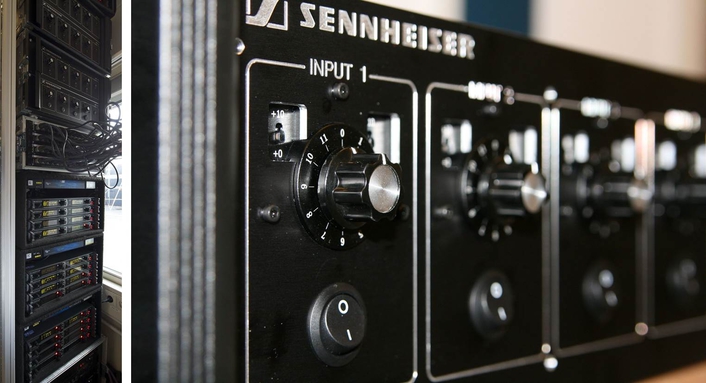 Local distribution combiners built by Sennheiser Benelux. Each unit has four antenna inputs, which it combines into a single out

A total of 20 active antennas in a diversity set-up were deployed strategically across the premises, picking up the wireless signals from the participants. These signals were fed to the local distribution combiners via co-axial cables that had been buried in the ground. The coaxial losses of every distribution line were fully compensated by the custom-built distribution system.

For the positioning of the antennas, all contingencies had to be taken into account. Vincent Tilgenkamp: “We decided to put up an extra set of diversity antennas in the stables, for example. While the antennas that covered the grazing ground would have easily covered the wooden stables too in an optimal situation, we had to take into account that the absorption qualities of wood can change considerably once it becomes wet or is covered by snow.” The hangars in which the participants live were also fitted with extra antennas to compensate for the shielding effect that the corrugated metal walls and ceilings have.

To capture ambient sound, 34 MKH 416 shotgun microphones were mounted together with the cameras to cover the entire Utopia grounds.

A lean workflow“
Compared to earlier reality shows, we have tailored a much leaner workflow,” stated Peter Slot. “For example, we have automated the audio, which was a great step. The story editor of Utopia just chooses the people to be seen on the four main programme feeds that are recorded, and he automatically gets their audio, plus a grouped signal from the ambience mics in an automated audio mix. While this automated mix is used directly for the Internet live streams, it is also recorded for the clip edits and final TV edits. For the creation of the final broadcast mix, all audio signals are recorded and available separately. In total we have 16 channels of audio, shared by the wired field mics, the wireless audio, and the grouped mixes.“

The Utopia story editor has two directors working on his behalf on site to pick up stories, each of whom is supported by a remote camera operator. The directors’ stories are fed into an Infostrada system together with relevant metadata, and from this wealth of pre-edits, the Utopia production team creates the final edit that airs daily.

Peter Slot: “The outcome is stunning. From all the challenges we had during the project, the coverage for the 24 wireless microphones was a major one but in the end the system Sennheiser has advised and developed has so far worked flawlessly without any dropouts.”

Willem Roskam, technical supervisor for Utopia at Talpa, commented: “We are very happy with the audio solution of Dutchview and Sennheiser. The audio workflow is as lean as possible, and we’re saving costs by not using any sound engineers during the recording. The wireless microphones are easy to handle by the production team and the audio quality is very high.”

Poised for international success
Being such a massive success in its native country, the Netherlands, Utopia has attracted the interest of other TV stations too. Talpa has already sold the format to Fox in the USA, Sat1 in Germany, PrimaTV in Romania and to TV8 in Turkey – where people from all walks of life will soon try to set up their ideal mini-society too. 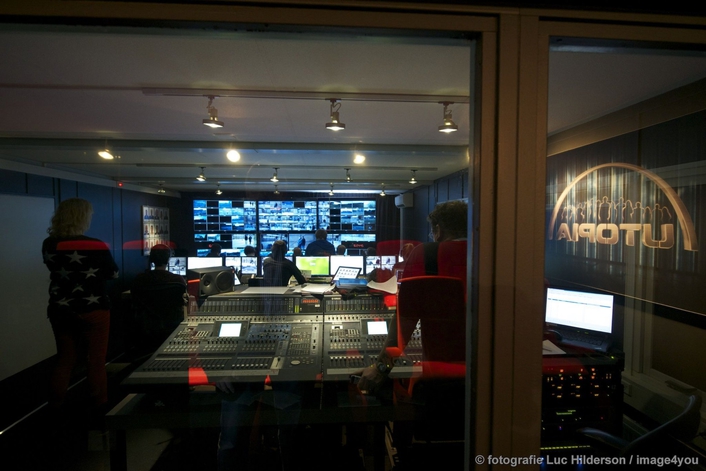