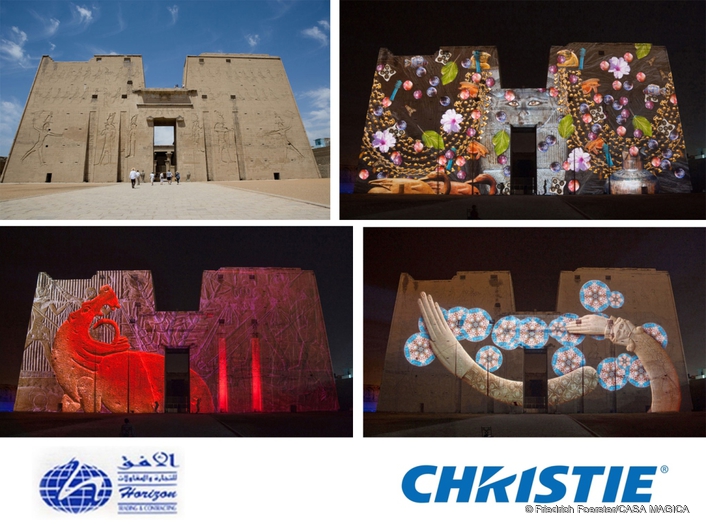 Horizon treats Nile tourists to audio visual spectacular
When Egyptian technology company Horizon for Trading & Contracting staged its first sound and light show for tourists visiting the Pyramids of Giza, back in 2002, head of engineering Wael Gouda little realised that it would lead to the company eventually presenting five such spectaculars at key temples along the River Nile.

Concentrating on the stretch between Luxor and Aswan, Horizon followed the Pyramids show with similar productions at the Philae Temple, Aswan, and then the Temple of Karnak at Luxor, and Abu Simbel.

But next month they will stage their most ambitious integrated show to date — at the Temple of Horus (Edfu), featuring large scale projection from four Christie Roadster S+20K 3-chip DLP® devices. This will be the first time that large format projection has been used in any of these shows.

Projecting a distance of 70m onto the main gate, this will mark the final destination in a three-stage visitor attraction.

Marking a great leap forward from the past sound and light shows, the Edfu spectacular will be staged three times per night.

But first Horizon had to win a competitive tender (involving companies from France and Spain), issued by Misr Company for Sound and Light, the Egyptian Government-owned company. Having been awarded the contract, Horizon reviewed the companies that would be able to offer the kind of projection output needed. “We put out feelers to two companies and Christie made the most favourable response,” said Gouda. 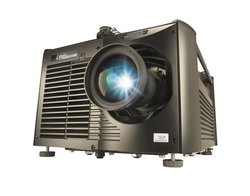 Phil Lord, Christie’s sales consultant, Africa, was soon on site, demonstrating the system to both Horizon, Misr Company for Sound and Light and also Casa Magica, the artistic directors of the show. The S+20K’s delivered such impressive results and resolution that Horizon were able to abandon their idea of running the more powerful 30,000 lumen projectors.

“The artistic directors were satisfied that the features of Christie were suitable for this application — and in fact we are able to use just two 20K’s stacked, with the lamps run at 60% of their power. This way we are not only energy efficient but we have full redundancy in the event of any faults.” These are mounted on pylons 70ft from the ground, and encased in two 2m x 2m temperature controlled cabinets.

The hazards of dust, sand and heat — the three enemies of working outdoors in the desert — have been countered by these air-conditioned, sealed cabinets in which the four projectors reside, since during the daytime (when the projectors are in storage) temperatures can soar to 45°C.

“With most of the structure IP65-rated it is fine for the conditions,” explains the Horizon engineer. “The cabinet, which is built in Egypt, is of good quality and we have tested the cooling and isolation to ensure it is suitable — including making sure that by day the storage temperature is OK.”

The team of creatives features lighting designers, sound composers and artistic directors. The show itself offers an experience in which the contents and presence of the original site are transposed into an artistic pageant of existing architecture, image, light, music and speech under the guidance of the artistic team. They collate high quality image sources and set up specific photo shoots in an overall show lasting 37 minutes (the final 16 minutes of which is dedicated to the giant Christie projection onto the 40ft x 40ft temple fascia).

The ancient temple itself is located on the west bank of the Nile; the second largest in Egypt (after Karnak) it is one of the best preserved. Dedicated to the falcon god Horus, it was built in the Ptolemaic period between 237 and 57 BC. The audio visual show depicts the building of the temple, presents a day in the life of a temple dweller, from sunrise to sunset, and tells the mythological story of Isis, Osiris, Horus and Set.

The footage is recorded on digital media, with speech and music updated regularly, and it is fed over fibre optic to the projectors from an AV Stumpfl media player running Wings Platinum 4 software. The show control also sends DMX signals to the lighting, which includes Martin Pro and Griven heads while the soundtrack is delivered through a Meyer sound system.

Equipped with multi-lingual headsets, up to 1000 people will attend the three nightly shows, which offer a different dimension to the daytime guided tours.

Wael Gouda says that the show has been run for 15 days as part of a soft opening prior to the official opening (in front of President Mubarak) on May 24th 2010.

The Horus Temple in Edfu 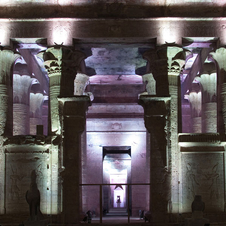 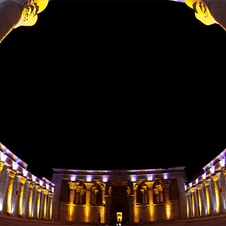 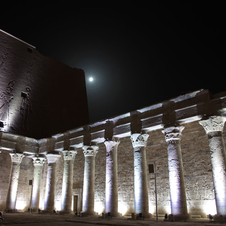