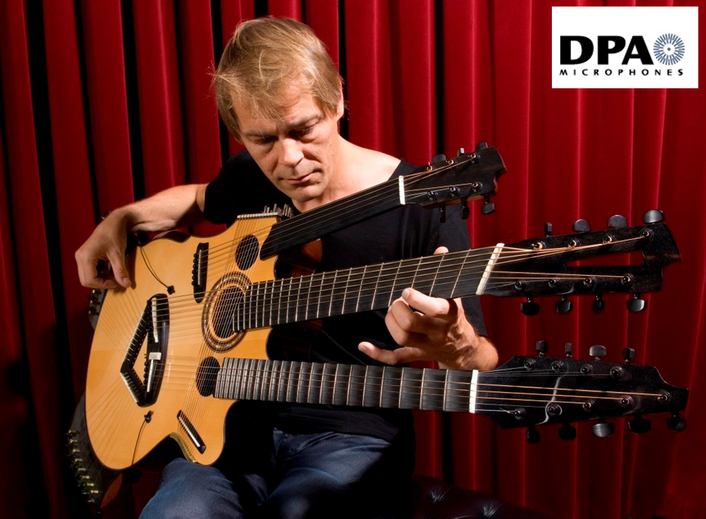 The concept for the Medusa sprung from Andersen’s success on the Indian classical scene and a desire to create a personal trademark encapsulating his musical identity. Accordingly, the Medusa features necks of a veena, sitar and conventional guitar.

“The sonic range and acoustic colours of the Manzer Medusa are fantastic and outstanding, so I needed to find a mic solution for live concerts,” says Andersen. “I ended up choosing the amazing SMK4061 stereo miking kit from DPA. The 4061 miniature mics are extremely small, but catch the overall sound of the 52-stringed beauty. For me they set a new standard, because the small size of the mics is mindblowing compared to the rich sound they produce.” 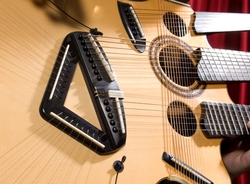 Andersen mounts both the DPA 4061 miniature omnis directly on the bridge of the Medusa. “I haven’t moved them from this position because the sound is all there,” he says. “I was a little concerned about the low bass notes, but these two mics clearly capture the whole audio spectrum.”

The instrument was manufactured by the world-renowned Linda Manzer, who co-designed it with Andersen. “I already have six conventional Manzer guitars, and all of them have changed my way of playing,” says Andersen. “The idea of the Medusa was to build the ultimate guitar, and Linda can do that like no-one else. Every detail on the guitar is original and it took two years to develop and put it all together.”

The Medusa was revealed at Newport Guitar Festival in Miami April 2010, but wasn’t played in public until its word premiere at the HEART museum of modern and contemporary art in Denmark, allowing Andersen to master the new techniques involved in playing this extraordinary instrument. This is followed by a concert and recording in Kerala, India, in October, to coincide with the launch of his Indian Heartbeat album on EMI/Indiabeat records. Extracts from the album can be heard at